The execution of a Civil War Deserter, from Frank Leslie’s The Soldier in Our Civil War, 1893

I had received six soldiers who had been tried and sentenced to be shot for the crime of desertion. At Warrenton Junction the sentences were to have been carried into execution. The field had been selected, coffins made and doom announced; but a sudden movement ordered for the day had caused a week’s suspension, during which five of the fated ones were recommended to the President for pardon. For the sixth, however, a ringleader, the sentence was unchanged; and again my division was ordered to form on the morrow to witness his execution. The hopelessness of his reprieve had been communicated, the chaplain had performed his last office, the firing party had been detailed, when again an order to march at five o’clock in the morning threatened another inhuman interruption, — which, however, did not happen, as will appear.

With the stoutest of the troops this convict had arched sturdily and manfully to Greenwich, following his coffin for fifteen weary miles. Here, at the end of his last march, his last hour on earth had come. A field near the camp had been selected, and preparations made for a fitting termination of the ghastly ceremony, when the planter, who had heard that his own field was to be devoted to this novel use, bustled up to ask with puffy earnestness, “Is it true, General, that you are going to shoot one of your men today?” Then, without awaiting a reply, he continued, “Now, my dear sir, you must not think any worse of me if I say this executing is a dreadful thing! And yet it is an incident of the war; why, sir, it is historical, and, — bless my soul, sir! — I want to see it; and, if you do not think it improper, I should like to take my little boys with me.”

“If you are so inclined, you may,” I replied. And indeed he did so incline, for he took a position as near to the scene as he could with safety. With umbrella under his arm, a linen coat over his shoulders, a little dog in front of him, and three small children (aged six, eight, and ten) by his side, he was the first on the field and the last to leave it.

Many years ago, hanging on the wall of an accustomed haunt, I remember finding a strange fascination in a coarse print of a military execution. Often have I stood spellbound before the picture. The condemned kneeling by the side of his grave, the coffin, the blindfolded victim, the platoon of soldiers with leveled muskets, the coming word, and in the distance a horseman galloping towards the spot, waving in his hand a pardon. 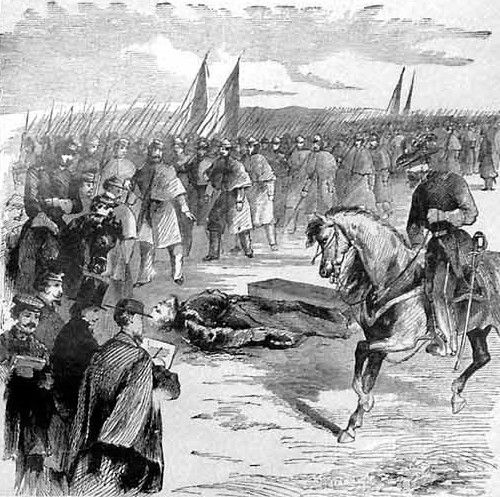 Could be but fly! and did he reach there in time? I could never forget the dreadful reality, even with the consciousness that it was, after all, but a painting, a creation perhaps of the imagination. But this execution at Greenwich was not a dream. Here, there was no coloring. A sad, stern duty was before me, and there was no reprieve. The hour had come; and the division was formed on three sides of a hollow square, leaving the fourth with an open grave and fresh earth on its edge, when a mournful procession approached.

Advancing slowly, silently, a firing party of six soldiers preceded an ambulance in which a soldier was seated upon his coffin, his arms pinioned and his eyes cast down. The provost guard followed. The ranks were motionless; all eyes were fixed upon the condemned. He was assisted to the ground, the soldiers placed the coffin by the side of the grave, and then the poor, unhappy victim knelt upon his coffin. Not a sound was heard save the mournful prayer and solemn tones of the death sentence. Not a man moved, as the bandage which shut out forever the last ray of God’s sunlight was placed over the eyes of one poor fellow-being. There was no pity and no hope. The sharp “Ready,  aim!” and then came the awful choking suspense, relieved by the ringing volley which drowned that word of dread. For an instant the form remained erect, still on its knees; the next, a corpse rolled over its last receptacle to the brink of a yawning grave.

On their way back to their encampments the troops moved in column by the corpse. Death, so real, had set its seal upon this human face; death, so solemn, so earnest, had driven a soul so completely from its human tenement that I could hardly realize that this rigid form had ever felt a human passion, or given way to human weakness.

When the last look had been taken and the field cleared of troops, a small burial party lowered the body, filled the grave with earth, covered the slight mound with a green sod, and left the scene of this tragedy alone with the dead. Of the six guns in the hands of the firing party but five were loaded; no one, therefore, could tell who held the blank. But four guns were discharged; and from these but two bullets struck the condemned man, — one passing through his arm, another through his breast, near his heart. He died without a struggle. He died, and left no word, save that, as at last he realized the awful truth, he begged that he might have an interview with myself or General Meade. But this was humanely denied, for I was only carrying out the will of General Meade, and he had passed relentlessly upon his case. The law had been defied; and so, at last, the law was vindicated.

Notes and Author: This tale was written by Brigadier General George H. Gordon who served in the Civil War, seeing action in the Shenandoah Valley campaign in 1861, and the next year was a commander at Cedar Mountain and Chantilly. He was also a leader in the Antietam and Suffolk Campaigns. After the war he resumed his law practice, as well as acting as an author and historian. The Guilty Deserter was included as a chapter in Albert Bushnell Hart’s book, The Romance of the Civil War, published in 1896. The text as it appears here; however, is not verbatim as it has been edited.