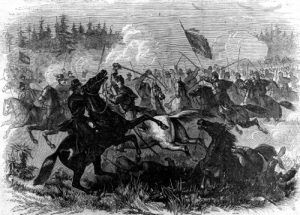 The order was given, in a ringing voice: “Form fours! draw saber! charge!” and now the Confederate soldiers pursued at headlong speed, uttering shouts and yells sufficiently loud to awaken the seven sleepers! The men were evidently exhilarated by the chase, the enemy just keeping near enough to make an occasional shot practicable. A considerable number of the Federal cavalrymen were overtaken and captured, and these proved to belong to the company in which Colonel Fitz Lee had formerly been a lieutenant.

The gay chase continued until we reached the Tottapotamoi, a sluggish stream, dragging its muddy waters slowly between rush-clad banks, beneath drooping trees; and this was crossed by a small rustic bridge.

The line of the stream was entirely undefended by works; the enemy’s right wing was unprotected. The picket at the bridge had been quickly driven in and disappeared at a gallop, and on the high ground beyond, Colonel Lee, who had taken the front, encountered the enemy. The force appeared to be about a regiment, and they were drawn up in line of battle in the fields to receive our attack. It came without delay. Placing himself at the head of his horsemen, Colonel Lee swept forward at the pas de charge, and with shouts, the two lines came together. The shock was heavy, and the enemy stood their ground bravely, meeting the attack with the saber. Swords clashed, pistols and carbines banged, yells, shouts, cheers resounded; then the Federal line was seen to give back, and take to headlong flight. 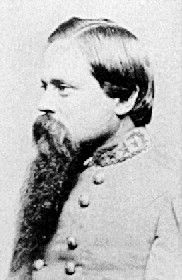 Fitz Lee immediately pressed on and burst into the camp near Old Church, where large supplies of boots, pistols, liquors, and other commodities were found. These were speedily appropriated by the men, and the tents were set on fire amid loud shouts. The spectacle was animating; but a report having got abroad that one of the tents contained powder, the vicinity thereof was evacuated in almost less than no time. We were now at Old Church.

“I think the quicker we move now the better,” I said, with a laugh.

So at a rapid trot, the column moved.

The gayest portion of the raid now began. From this moment it was neck or nothing, do or die. We had one chance of escape against ten of capture or destruction.

Everywhere the ride was crowded with incidents. The scouting and flanking parties constantly picked up stragglers and overhauled unsuspecting wagons filled with the most tempting stores. In this manner, a wagon, stocked with champagne and every variety of wines, belonging to a General of the Federal army, fell prey to the thirsty gray-backs. Still, they pressed on. Every moment an attack was expected in front or rear.

The column was now skirting the Pamunkey, and a detachment hurried off to seize and burn two or three transports lying in the river. Soon a dense cloud rose from them, the flames soared up, and the column pushed on. Everywhere were seen the traces of flight — for the alarm of “hornets in the hive” was given. Wagons had turned over and were abandoned — from others, the excellent army stores had been hastily thrown. This writer got a fine red blanket, and an excellent pair of cavalry pantaloons, for which he still owes the United States. 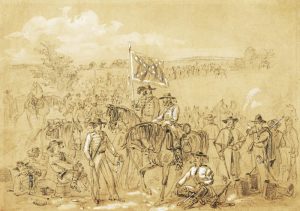 Other things lay about in tempting array, but we were approaching Tunstall’s, where the column would doubtless make a charge; and to load down a weary horse was injudicious. The advance guard was now in sight of the railroad. There was no question about the affair before us. The column must cut through, whatever force guarded the railroad; to reach the lower Chickahominy, the guard here must be overpowered. Now was the time to use the artillery, and every effort was made to hurry it forward.

Tunstall’s was now nearly in sight, and that good fellow Captain Frayser came back and reported one or two companies of infantry at the railroad. Their commander had politely beckoned to him as he reconnoitered, exclaiming in wheedling accents, full of Teutonic blandishment, “Koom yay!” But this cordial invitation was disregarded; Frayser galloped back and reported, and the ringing voice of the leader ordered “Form platoons! draw saber! charge!” At the word the sabers flashed, a thundering shout arose, and sweeping on in column of platoons, the gray people fell upon their blue adversaries, gobbling them up, almost without a shot. It was here that my friend Major Foote got the hideous little wooden pipe he used to smoke afterward. He had been smoking a pipe when the order to charge was given; and in the rush of the horsemen, dropped and lost it. He now wished to smoke, and seeing that the captain of the Federal infantry had just filled his pipe, leaned down from the saddle, and politely requested him to surrender it.

“I want to smoke! “growled the Federal captain.

“So do I,” retorted Major Foote.

“This pipe is my property,” said the captain.

“Oh! what a mistake!” responded the major politely, as he gently took the small affair and inserted it between his lips. Anything more hideous than the carved head upon it I never saw.

In an hour the column moved again. Meanwhile, a little incident had happened which still makes me laugh. There was a lady living some miles off in the enemy’s line whom I wished to visit, but I could not obtain the General’s consent. “It is certain capture,” he said; “send her a note by some citizen, say Dr. Hunt; he lives near here.” This I determined to do, and set off at a gallop through the moonlight for the house, some half a mile distant, looking out for the scouting parties which were probably prowling on our flanks. Reaching the lonely house, outside the pickets, I dismounted, knocked at the front door, then the back, but received no answer. All at once; however, a dark figure was seen gliding beneath the trees, and this figure cautiously approached. I recognized the Doctor and called to him, whereupon he quickly approached, and said, “I thought you were a Yankee!” and greeting me cordially, led the way into the house. Here I wrote my note and entrusted it to him for delivery — taking one from him to his wife, within our lines. In half an hour I rode away, but before doing so asked for some water, which was brought from the well by a sleepy, sullen, and insolent negro. This incident was fruitful of woes to Dr. Hunt! A month or two afterward I met him looking as thin and white as a ghost.

“The matter is,” he replied, with a melancholy laugh, “that I have been starving for three weeks in Fortress Monroe on your account. Do you remember that servant who brought you the water that night of the raid?”

“Well, the very next day he went over to the Yankee picket and told them that I had entertained Confederate officers, and given you all information which enables you to get off safely. In consequence, I was arrested, carried to Old Point, and am just out! ” 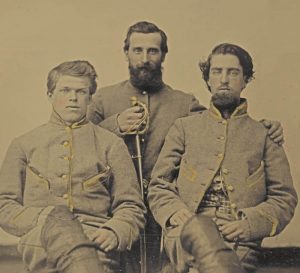 At the first streak of dawn, the Chickahominy was in sight, and we were spurring forward to the ford.

It was impassable! The heavy rains had so swollen the waters that the crossing was utterly impracticable! Here we were within a few miles of an enraged enemy with a swollen and impassable stream directly in our front — the angry waters roaring around the half-submerged trunks of the trees — and expecting every instant to hear the crack of carbines from the rear-guard indicating the enemy’s approach! The situation was not pleasing. I certainly thought that the enemy would be upon us in about an hour, and death or capture would be the sure alternative. This view was general.

The scene upon the river’s bank was curious, and under other circumstances would have been laughable. The men lay about in every attitude, half-overcome with sleep, but holding their bridles, and ready to mount at the first alarm. Others sat their horses asleep, with drooping shoulders. Some gnawed crackers; others ate figs, or smoked, or yawned. Things looked blue, and that color was figuratively spread over every countenance.

The column was ordered to move on down the stream to a spot where an old bridge had formerly stood. Reaching this point, a strong rear-guard was thrown out, the artillery placed in position, and we set to work vigorously to rebuild the bridge, determined to bring out the guns or die trying.

The bridge had been destroyed, but the stone abutments remained some 30 or 40 feet only apart, for the river here ran deep and narrow between steep banks. Between these stone sentinels, facing each other, was an “aching void ” which it was necessary to fill. A skiff was procured; this was affixed by a rope to a tree, in the mid-current just above the abutments, and thus a movable pier was secured in the middle of the stream. An old barn was then hastily torn to pieces and robbed of its timbers; these were stretched down to the boat, and up to the opposite abutment, and a footbridge was thus ready. Large numbers of the men immediately unsaddled their horses, took their equipment over, and then returning, drove or rode their horses into the stream, and swain them over. In this manner, a considerable number crossed, but the process was much too slow. There, besides, was the artillery, which we had no intention of leaving. A regular bridge must be built without a moment’s delay. 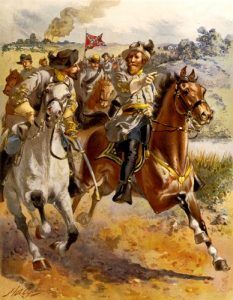 Heavier blows resounded from the old barn; huge timbers approached, borne on brawny soldiers, and descending into the boat anchored in the middle of the stream, the men lifted them across. They were just long enough; the ends rested on the abutments, and immediately thick planks were hurried forward and laid crosswise, forming a secure footway for the cavalry and artillery horses.

At last, the bridge was finished; the artillery crossed amid hurrahs from the men, and then the General slowly moved his cavalry across the shaky footway. A little beyond was another arm of the river, which was, however, fordable, as I ascertained and reported to the General; the water just deep enough to swim a small horse; grid through this, as through the interminable sloughs of the swamp beyond, the head of the column moved. The prisoners, who were numerous, had been marched over in advance of everything, and these were now mounted on mules, of which several hundred had been cut from the captured wagons and brought along. They were started under an escort across the ford, and into the swamp beyond. Here, mounted often two on a mule, they had a disagreeable time; the mules constantly falling in the treacherous mud-holes and rolling their riders in the ooze. When a third swamp appeared before them, one of the Federal prisoners exclaimed, with tremendous indignation, “How many Chicken-hominies are there, I wonder, in this infernal country!”

The gentlemen of the county, we afterward heard, had been electrified by the rumor that “Stuart was down at the river trying to get across,” and had built a hasty bridge for us lower down. We were over, however, and reaching Mr. Cutter’s, the General and his staff lay down on a carpet spread on the grass in the June sunshine, and went to sleep. This was Sunday. I had not slept since Friday night, except by snatches in the saddle, and in going on to Richmond afterward fell asleep every few minutes on horseback.

By John Estes Cooke, 1862. Compiled and edited by Kathy Weiser/Legends of America, updated May 2021.