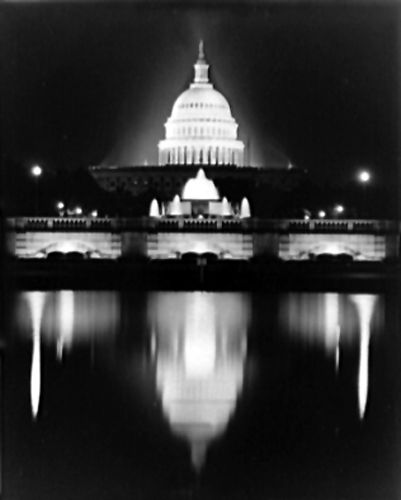 By The Philadelphia Press, 1898

The Capitol at Washington is probably the most thoroughly haunted building in the world. Not less than 15 well-authenticated ghosts infest it, and some of them are of a more than ordinarily alarming character.

What particularly inspires this last remark is the fact that the Demon Cat is said to have made its appearance again, after many years of absence. This is a truly horrific apparition and no viewless specter such as the invisible grimalkin that even now trips people up on the stairs of the old mansion which President Madison and his wife, Dolly, occupied, at the corner of Eighteenth Street and New York Avenue, after the White House was burned by the British. That, indeed, is altogether another story; but the feline spook of the Capitol possesses attributes much more remarkable, inasmuch as it has the appearance of an ordinary pussy when first seen, and presently swells up to the size of an elephant before the eyes of the terrified observer. 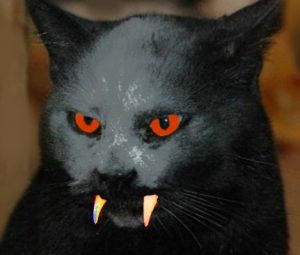 The Demon Cat, in whose regard the testimony of the utmost seeming authenticity was put on record 35  years ago, has been missing since 1862. One of the watchmen on duty in the building shot at it then, and it disappeared. Since then, until now, nothing more has been heard of it, though one or two of the older policemen of the Capitol force still speak of the spectral animal in awed whispers.

Their work, when performed in the night, requires more than ordinary nerve, inasmuch as the interior of the great structure is literally alive with echoes and other suggestions of the supernatural. In the daytime, when the place is full of people and the noises of busy life, the professional guides make a point of showing persons how a whisper uttered when standing on a certain marble block is distinctly audible at another point quite a distance away, though unheard in the space between.

A good many phenomena of this kind are observable in various parts of the Capitol, and the extent to which they become augmented in strangeness during the silence of the night may well be conceived. The silence of any ordinary house is oppressive sometimes to the least superstitious individual. There are unaccountable noises, and a weird and eerie sort of feeling comes over him, distracting him perhaps from the perusal of his book. He finds himself indulging in a vague sense of alarm, though he cannot imagine any cause for it.

Such suggestions of the supernatural are magnified a thousandfold in the Capitol when the watchman pursues his lonely beat through the great corridors whose immense spaces impress him with a sense of solitariness, while the shadows thrown by his lantern gather into strange and menacing forms.

One of the most curious and alarming of the audible phenomena observable in the Capitol, so all the watchmen say, is a ghostly footstep that seems to follow anybody who crosses Statuary Hall at night. It was in this hall, then the chamber of the House of Representatives, that John Quincy Adams died — at a spot indicated now by a brass tablet set in a stone slab, where his desk stood. Whether or not it is his ghost that pursues is a question open to dispute, though it is to be hoped that the venerable ex-President rests more quietly in his grave. At all events, the performance is unpleasant and even gruesome for him who walks across that historic floor, while the white marble statues of dead statesmen placed around the walls seem to point at him with outstretched arms derisively. Like the man in Coleridge’s famous lines he “walks in fear and dread Because he knows a frightful fiend doth close behind him tread.” 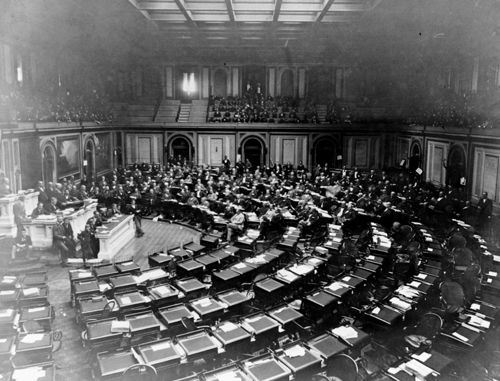 At all events, he is uncertain lest such may be the case. And, of course, the duties of the watchman oblige him, when so assigned, to patrol the basement of the building, where all sorts of hobgoblins lie in wait.

One of the Capitol policemen was almost frightened out of his wits one night when a pair of flaming eyes looked out at him from the vaults under the chamber of the House of Representatives where the wood is stored for the fires. It was subsequently ascertained that the eyes in question were those of a fox, which, being chivied through the town, had sought refuge in the cellar of the edifice occupied by the national Legislature. The animal was killed for the reason which obliges a white man to slay any innocent beast that comes under his power.

But, speaking of the steps which follow a person at night across the floor of Statuary Hall, a bold watchman attempted not long ago to investigate them on scientific principles. He suspected a trick, and so bought a pair of rubber shoes, with the aid of which he proceeded to examine into the question. In the stillness of the night he made a business of patrolling that portion of the principal Government edifice, and, sure enough, the footsteps followed along behind him. He cornered them; it was surely some trickster! There was no possibility for the joker to getaway. But, a moment later, the steps were heard in another part of the hall; they had evaded him successfully. Similar experiments were tried on other nights, but they all ended in the same way. 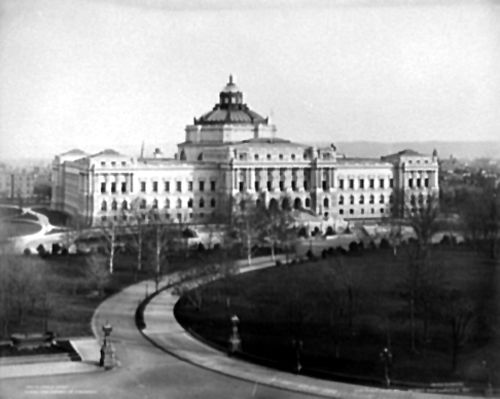 Four years ago there died in Washington an old gentleman who had been employed for thirty-five years in the Library of Congress. The quarters of that great book collection, while housed in the Capitol, were distressingly restricted, and much of the cataloging was done by the veteran mentioned in a sort of vault in the sub-cellar. This vault was crammed with musty tomes from floor to ceiling, and practically no air was admitted. It was a wonder that he lived so long, but, when he came to die, he did it rather suddenly. Anyhow, he became paralyzed and unable to speak, though up to the time of his actual demise he was able to indicate his wants by gestures. Among other things, he showed plainly by signs that he wished to be conveyed to the old library.

This wish of his was not obeyed, for reasons which seemed sufficient to his family, and, finally, he relinquished it by giving up the ghost. It was afterward learned that he had hidden, almost undoubtedly, $6000 worth of registered United States bonds among the books in his sub-cellar den — presumably, concealed between the leaves of some of the moth-eaten volumes of which he was the appointed guardian.

Certainly, there could be no better or less-suspected hiding-place, but this was just where the trouble came in for the heirs, in whose interest the books were vainly searched and shaken, when the transfer of the library from the old to its new quarters was accomplished. The heirs cannot secure a renewal of the bonds by the Government without furnishing proof of the loss of the originals, which is lacking, and, meanwhile, it is said that the ghost of the old gentleman haunts the vault in the sub-basement which he used to inhabit, looking vainly for the missing securities.

The old gentleman referred to had some curious traits, though he was by no means a miser — such as the keeping of every burnt match that he came across. He would put them away in the drawer of his private desk, together with expired street-car transfers — the latter done up in neat bundles, with India-rubber bands.

Quite an intimate friend he had, named Twine, who lost his grip on the perch, so to speak, about six years back. Mr. Twine dwelt during the working hours of the day in a sort of cage of iron, like that of Dreyfus, in the basement of the Capitol. As a matter of fact, Dreyfus does not occupy a cage at all; the notion that he does so arises from a misunderstanding of the French word “case,” which signifies a hut.

However, Twine’s cage was a real one of iron wire, and inside of it he made a business of stamping the books of the library with a mixture made of alcohol and lampblack. If the observation of casual employees about the Capitol is to be trusted, Mr. Twine’s ghost is still engaged at intervals in the business of stamping books at the old stand, though his industry must be very unprofitable since the Government’s literary collection has been moved out of the Capitol.

Ghosts are supposed to appertain most appropriately to the lower regions, in as much as the ancients who described them first consigned the blessed as well as the damned to a nether world. Consequently, it is not surprising to find that phantoms of the Capitol are mostly relegated to the basement.

Exceptions are made in the case of Vice-President Wilson, who, as will be remembered, died in his room at the Senate end of the building, and also with respect to John Quincy Adams, whose nocturnal perambulations are so annoying to the watchmen. Mr. Wilson is only an occasional visitor on the premises, it is understood, finding his way thither, probably, when nothing else of importance is “up,” so to speak, in the spiritual realm which now claims him for its own. It is related that on one occasion he nearly frightened to death a watchman who was guarding the coffin of a Tennessee Senator who was lying in state in the Senate Chamber. The startle was doubtless uncontemplated, in as much as the Senator was too well-bred a man to take anybody unpleasantly by surprise.

There was a watchman, employed quite a while ago as a member of the Capitol police, who was discharged finally for drunkenness. No faith, therefore, is to be placed in his sworn statement, which was actually made, to the effect that on a certain occasion he passed through the old Hall of Representatives — now Statuary Hall — and saw in session the Congress of 1848, with John Quincy Adams and many other men whose names have long ago passed into history. It was, if the word of the witness is to be believed, a phantom legislative crew, resembling in kind if not in character the goblins which Rip Van Winkle encountered on his trip to the summits of the storied Catskills. 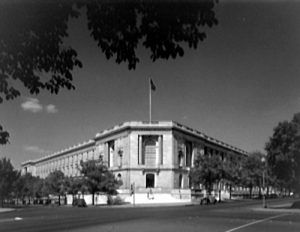 But, to come down to things that are well authenticated and sure, comparatively speaking — the basement of the Capitol, as has been said, is the part of the building chiefly haunted.

Beneath the hall of the House of Representatives strolls by night a melancholy specter, with an erect figure, a great mustache, and his hands clasped behind him Who he is nobody has ever surmised; he might be, judging from his aspect, a foreigner in the diplomatic service, but that is merely a guess. Watchmen at night have approached him in the belief that he was an intruder, but he has faded from sight instantly, like a picture on a magic lantern slide.

At precisely 12.30 of the clock every night, so it is said, the door of the room occupied by the Committee on Military and Militia of the Senate opens silently, and there steps forth the figure of General Logan, recognizable by his long black hair, military carriage, and the hat he was accustomed to wear in life. Logan was the chairman of this committee, and, if the reports are credited, he is still supervising its duties.

Published in the Philadelphia Press, October 2, 1898. Compiled and edited by Kathy Weiser/Legends of America, updated April 2020.