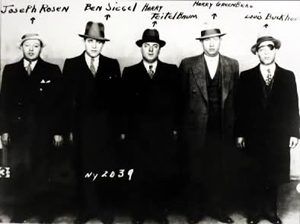 Of course, Lepke and Anastasia did not rely entirely on the Boys from Brownsville to do all their dirty work. Other killers were needed to do a variety of jobs in a myriad of places. One killer was enlisted from a unlikely place: the Loch Sheldrake Country Club, in the Catskills, in upstate New York.

The Loch Sheldrake Country Club was owned by Sam Tannenbaum, who had first owned a grocery store on Orchard Street on the Lower East Side of Manhattan. The Loch Sheldrake Country Club was a ritzy establishment, and it housed many rich Jewish families for their summer vacations. Of course, Lepke and his crew were well-represented at the Loch Sheldrake. Those gangsters who rubbed elbows with the legitimate Jewish businessmen included Lepke, his partner Jacob “Gurrah” Shapiro, Shimmy Salles, a bagman for Lepke’s rackets, Curly Holtz, a labor racketeer, and “Big Harry” Greenburg, who was Lepke and Shapiro’s partners in various Garment Center swindles.

Gurrah Shapiro, a thick-chested gorilla-of-a-man, was quite a character himself, and also quite capable, as was Lepke, of pulling the trigger when necessary. Whenever Shapiro was angry, and that was often, his favorite saying was “Get out of here.” Yet, with his gravelly voice, the phrase sounded like “Gurra dahere.” Hence, his pals gave Shapiro the nickname “Gurrah.”

Sam Tannenbaum had a teenaged son named Allie, who Sam eventually was grooming as his replacement when Sam decided to retire. Sam Tannenbaum employed Allie at his hotel, either waiting tables, or setting up beach chairs by the lake. Sam also did not pay Allie a dime for his work, to ensure Allie didn’t disappear to his old haunts on the Lower East Side of Manhattan, until after the summer season was over. As the owner’s son, the Jewish gangsters invited Allie Tannenbaum to all their parties, and Allie got a fresh taste of what it was like to be around people who had coins constantly jingling in their pockets. This made him a likely suspect to be drawn into their world of murder and mayhem.

One day, after the summer season of 1931 was over at Loch Sheldrake, Tannenbaum was strolling down Broadway in Manhattan, when he bumped into “Big Harry” Greenberg.

Greenberg asked Tannenbaum, “Do you want a job?”

“I could use one, if it pays,” Tannenbaum said.

Greenberg smiled. “This one is for Lepke. You know what kind of a job it will be.”

Tannenbaum shrugged, and said he would do whatever it took to earn some fancy cash, so he could spread it around like his Jewish gangster idols.

Little did Greenberg know he was hiring one of his eventual killers. 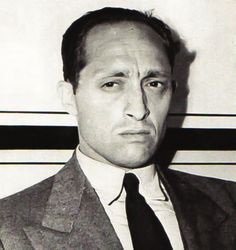 Tannenbaum started working for Lepke, initially for $35 a week. His job included general assignments like slugging, strikebreaking, and throwing stink bombs where they were needed to be thrown. He later  graduated to more important duties, like “schlammings,” which meant he “schlammed,” or cracked the heads of union workers who were not towing Lepke’s line.

As his work production increased, so did Tannenbaum’s salary. In short order, he was intimately involved in six murders, and he helped dispose of the body of a seventh murder victim. As a result of “making his bones” in the murder department, Tannenbaum started raking in an impressive $125 a week; more than he made in an entire summer at his father’s resort. Because of his summer location in the Catskills, Tannenbaum’s job consisted mostly of murders and extortions in upstate New York. Tannenbaum was a valuable asset to Lepke in Sullivan County, because he was familiar with the back highways and numerous lakes, where bodies could be disposed of. During the winter, Tannenbaum and his family vacationed in Florida, where he worked as a strong-arm-man in several of Lepke’s gambling joints.

In the early 1930’s Lepke added another valuable asset to Murder Inc., when he hired Charlie “The Bug” Workman.

“The Bug” was born on the Lower East Side of Manhattan in 1908, the second of six children born to Samuel and Anna Workman. Workman quit school in the 9th grade, and began roaming the streets of the Lower East Side, looking for trouble. When he was 18, Workman was arrested for the first time, for stealing a $12 bundle of cotton thread from a truck parked on Broadway. Since it was his first offense, Workman got off with simple probation. The following year, Workman was arrested for shooting a man behind the ear over who-owed-who $20. By this time, Workman’s reputation on the streets was such, the man he shot refused to testify against him, and even said he couldn’t truthfully identify Workman as the shooter. Miffed, the cops pulled up his file and decided Workman had violated his parole on the cotton theft. As a result, Workman was sent to the New York State Reformatory. For the next few years, Workman was in and out of prison, for such parole violations as associating with “questionable characters” and “failure to get a job.”

In 1926, Workman hooked on as a freelance leg breaker, or schlammer, for Lepke’s union strike breaking activities. Workman did such a good job, in the early 1930’s, Lepke put Workman on his permanent payroll at $125 a week, as a killer for Lepke’s Murder Incorporated machine. Lepke liked Workman’s cool demeanor, and after Workman performed a few exceptional “hits” for Lepke, Lepke gave him the nickname “The Bug,” because a person had to be crazy to kill with the calm detachment Workman displayed when performing his gruesome tasks. Workman’s other nickname “Handsome Charlie,” was given to him by members of the opposite sex.

For the next few years, Workman was in and out of trouble with the law. In 1932, he was arrested for carrying a concealed weapon. In 1933, Workman was arrested again for decking an off-duty police officer after a minor traffic dust-up. All the while, his specialty was killing whomever Lepke said needed to be killed. After a hit was done, Workman enjoyed the fringe benefit of “sweeping out the pockets” of his victims. Most of the times, Workman earned himself an extra thousand dollars or so for his efforts. And one time he even found a ten-thousand-dollar bonus in the pants pocket of some poor sucker whom he had just whacked.

Lepke’s Murder Inc. didn’t limit it’s exploits to the New York City area. In fact, Murder Incorporated eventually employed anywhere from 150-200 killers around America, and it was reported these killers may have committed as many as 800-1000 murders from the late 1920’s, until Murder Incorporated’s demise in the early 1940’s.

About the Author:  A Vietnam veteran in the United States Navy, Joseph J. Bruno started out in the newspaper business in the mid 1970’s as a sports columnist for the New York Tribune. During the 1970’s and 80’s, Bruno was an associate editor for Boxing Illustrated and monthly contributor to Ring Magazine In 1986-1987, Bruno wrote a sports column for the Times Herald Record in Middletown, New York. Since that time he has written numerous articles for various magazines as well as a number of books — both fiction and non-fiction. More information can be seen on his blog here: John Bruno on the Mob.