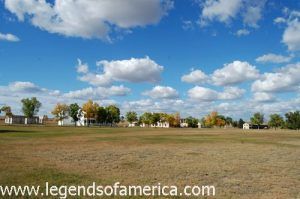 Like many other forts across the American West, Fort Laramie, with its long history, is allegedly said to be haunted. This old post, now a National Historic site, dates back to 1834 when a trading post was built here called Fort William. By the 1840s, wagon trains rested and re-supplied here, bound for the west along the Oregon-California Trail. In 1841, Fort John was constructed, replacing the original wooden stockade of Fort William. Built of adobe brick, Fort John stood on a bluff overlooking the Laramie River. Eight years later, Fort Laramie, the military post, was founded in 1849. As more and more emigrants pushed westward, Indian attacks became more common, and Fort Laramie was just many of the military posts established to protect these westbound travelers.

Virtually, since the post was established, it has said to have been called home, not only to hundreds of soldiers but also is said to be visited by a host of ghosts. The most well-known spirit in the vicinity of the fort is the “Lady in Green.”

Her story began when the site was known as Fort John, a trading post of the American Fur Company. The agent in charge at the time, brought his educated and sophisticated daughter to visit. Known to be an accomplished equestrian, her visit was to be brief, but she begged to stay on. Concerned for her safety on the rough frontier, he relented, after gaining her promise that she would never leave the compound without an escort. He also tasked several men to guard her any. One day, while he was away from the post, his rebellious daughter slipped away from the post on a big black horse. When someone spied her, two men quickly chased after her, calling for her to stop. But the strong-willed girl ignored them, riding ever distant on the prairie. She never returned.

When her father got back to the post, he was obviously extremely distraught and spent a significant amount of time looking for her. But, no sign of her was ever found. What happened to the vanished girl is still a mystery.

Since then, her ghost is said to appear east of Fort Laramie on the Oregon Trail, every seven years. The lone figure is seen wearing a long, green riding dress and a veiled hat, with her dark hair tucked up beneath it. Still, she rides her big black stallion, holding a jeweled quirt.

The old Captain’s Quarters building is also said to be haunted. Built in 1870, it was intended as housing for the commanding officer, but was, instead divided into a duplex, when the commanding officer of the time chose to remain in another new dwelling. When a new officer was assigned to the post, he could “rank out of quarters” any officer junior to him, taking the house for his own. Here, a number of odd events have said to have occurred including doors opening by themselves, and the sounds of eerie footsteps when no one is present. Late at night, there have been reports of bright lights coming from inside the facility, even though it has no electricity. The spirit in the Captain’s Quarters has fondly been nicknamed George by the staff. 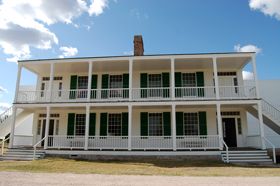 Another spirit is said to haunt the building known as Old Bedlam, constructed in 1849, as bachelor officers’ quarters, and the oldest military building in Wyoming. This entity, thought to be a Cavalry Officer, has been known to walk throughout the building, sometimes telling people to “be quiet.”

The Cavalry Barracks building, built in 1874, once housed hundreds of soldiers in its two large, open squad bays on the second floor. Early in the morning, the sounds of heavy boots can be heard making their way over the boardwalk, at about the time soldiers would have once answered the reveille.

Other sightings have been made in and around the fort including a young man in a raincoat who looks as if he is talking to someone (though no one is there). The apparition of a surgeon has been seen, looking irritable, in a blood-covered uniform.

At Deer Creek, a small stream that runs through the fort property, a headless man has been sighted throwing rocks into the creek during the early morning hours. This ghost is said to be unfriendly and should be avoided.

Southeast of the fort is a place called Bovee Draw. Here, at around midnight, witnesses have spied the ghost of a Civil War soldier who is acting erratically. This ghost, too, is said to be menacing and should be left alone.

North of town, there is a place called Detention Dam. Here, the spirit of a man holding a blood-splattered sword has been seen staring at the water at the stroke of midnight.