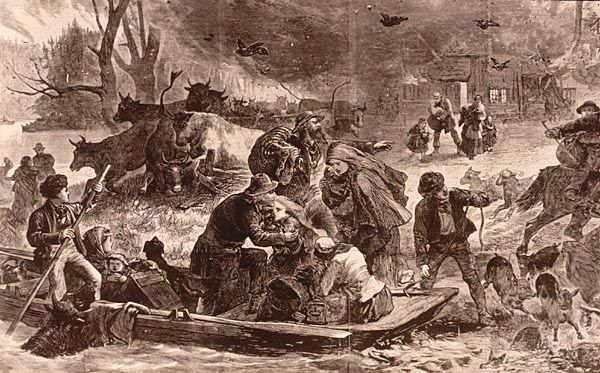 While history recorded the Great Chicago Fire of 1871 as one of the worst in American history, the headlines overshadowed a greater tragedy due to the slow spread of the news.

October 8, 1871, the same day as the Chicago fire, between 1,200 to 2,500 American’s lost their lives, and 1.2 million acres of land were burned in the Upper Midwest, in what is known as the Peshtigo Firestorm of 1871, the deadliest in United States recorded history.

The match to this great disaster started earlier as numerous small fires had already been burning from an extremely dry summer season and human carelessness.

Peshtigo at the time was a small frontier town of over 1,700 on two sides of the Peshtigo River, thriving on the success of the lumber industry. That fall, the village’s population grew through an influx of railroad laborers, salesmen and visitors. Oak, maple, beech, ash, elm, cedar, birch and pine could all be found in the forests surrounding the town. Chicago Millionaire William G. Ogden was a prominent figure as he had had built, what was at the time, the country’s largest woodenware factory in Peshtigo, leading to buildings all constructed of lumber. Even sawdust was used as a floor covering.

In addition, areas around the town had seen farmers use the “slash and burn” method to clear land, and railroad workers leaving cut brush in piles next to the tracks, which were sometimes ignited by passing steam engines. That summers drought had made it common to smell smoke in the air, leading to a false sense of security for the residents of Peshtigo.

Then on Sunday, October 8 a frontal system pushed through bringing strong winds, which escalated the smaller fires to massive proportions. The Reverend Peter Pernin, a witness to the disaster, would later write that at 8:30 pm that evening

the menacing crimson reflection on the western sky was rapidly increasing in size and intensity; in the midst of the unnatural calm and silence reigning around, the strange and terrible noise of fire, strange and unknown thunderous voice of nature.”

Not long after the air was thick with smoke and ash, and everything was in flames. Described as a wall of flame a mile high and five miles wide traveling up to 100 miles an hour, the fire was so intense it jumped the waters of Green Bay as well as the Peshtigo River, burning both sides of the town. Survivors reported a fire tornado that threw rail cars and houses into the air. Residents fled to the river and other nearby bodies of water, leading to several drowning.

As the sun rose the next day, an area twice the size of Rhode Island had been destroyed. Twelve communities lay in ruins. It was labeled the Peshtigo fire though because that area had the highest concentration of people, and it was here that the fire reached it’s peak. An 1873 report to the Wisconsin Legislature listed 1,182 names of deceased or missing.  There were less than 1,000 residents left out of the over 1,700 in Peshtigo.  Some later figures indicate that as many as 2,500 lost their lives.

Although many theories of how the fire started have been reported, including everything from comets to aliens, most believe it was the perfect combination of drought and carelessness. The fact that the fire started around the same time as the Great Chicago Fire is a coincidence, combined with the same weather system that brought the winds. Chicago’s disaster was much more publicized but only killed around 300. The larger city’s disaster stole the headlines at the time, leaving the tragedy to be known as the “forgotten fire” of Peshtigo. 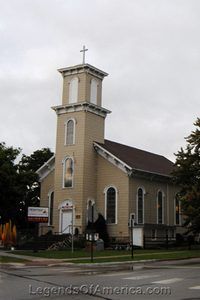 Today, Peshtigo is home to over 3,500 people and hosts the Peshtigo Fire Museum, with a small collection of artifacts from the blaze, as well as first-person descriptions of the disaster. Next to the museum is the Peshtigo Fire Cemetery and a memorial dedicated to the victims.  On October 8, 2012, another memorial commemorating the fire was dedicated at the bridge over the Peshtigo River. 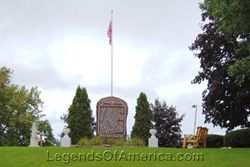 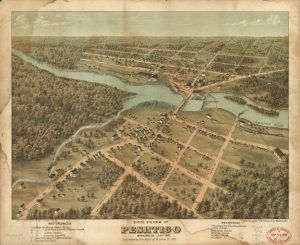 3 thoughts on “Peshtigo, Wisconsin Firestorm of 1871”