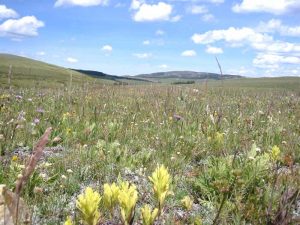 Located high in the northern Pioneer Mountains, at an elevation of some 8,000 feet, Vipond Park, Montana got its start when John Vipond discovered the Mewonitoc Lode in April 1868. The following year, John’s brother, William staked another claim which would become the Gray Jockey Mine. Though other prospectors soon followed, production of the mines would be slow due to the high elevation, rugged terrain, and lack of transportation. However, in 1872, a third Vipond brother named Joseph, gathered several miners and began to build a road to the town of Dewey in order to move the ore.

Other rich finds were made and soon the area sported the Lone Pine, Queen of the Hills, Faithful, and numerous other mines. The camp that grew up around the mines was called Vipond Park, for the brothers that had discovered the first lodes. Producing chiefly silver, but also copper and gold, three mills were soon built at nearby Dewey to process the ores.

In 1900, the Queen of the Hills Mine was sold for $75,000 by Charles W. Clark and E. L. Whitmore, who hired about 50 men and began to develop the mine and built a 10-stamp mill. Just two years later, the operation was sold again, but the mine never produced what the owners hoped for. Renewed production occurred at several of the old mines during the 1920s and ‘30s, but this, too, was short-lived.

Today, the area is part of the Beaverhead-Deerlodge National Forest. Numerous old mining sites and a few remaining buildings can still be seen in the area. Vipond Park is about one mile northwest of Dewey. Take Forest Road 187 south up into the Pioneer Mountains.