Monument Valley, a Navajo Nation tribal park whose red-sandstone formations on the Colorado Plateau lie mostly in Arizona but also into Utah.

It’s 7:30 AM, sunrise. I stand in the parking lot of the Monument Valley Tribal Park Visitors Center, waiting for my Navajo guide. The wind stirs and I zip up my jacket, crunching my boots in a patch of January snow as I step in place to keep warm.

The sun emerges in a burning vermilion ball of light, turning the Valley’s dramatic sandstone monoliths a flaming red, and my eyes fall on two of these massive structures – square buttes which jut from the ochre sand like a pair of giant hands, thumbs pointing skyward. 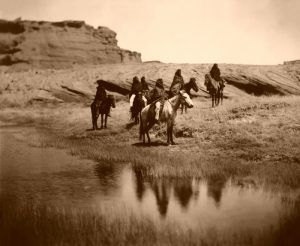 I turn at the Navajo greeting. Harold Simpson, my albino Navajo guide who owns Simpson’s Trailhandler Tours stands behind me with his brother Richard.

“I see you’ve noticed the Mittens,” he says with a grin, pointing to the giant mitten-shaped buttes. “Did you know that Dinéh, the Navajo, believe the Mittens fit the hands of the Gods, and at one time, Monument Valley was the Gods’ playground?”

I look again at the Mittens, imagining them filled out by a pair of giant Godly hands.

“My Grandmother said that the Gods left their mittens here so they could come back and reclaim them.” Harold’s blonde hair wafts in the breeze as he smiles at his dark-haired brother. “But… Richard says they look like two elephants lying on their backs with their feet in the air.”

The story reminds me of why I’ve come to this high, windswept heart of the Southwest: to learn the Navajo tales first-hand — age-old legends that have been passed down through the generations. I want to explore this sacred place, home to gentle people, roaming horses, and scenery so striking it has been used as the background for countless movies and TV commercials.

In fact, being a movie buff, I’d chosen Goulding’s Lodge and Tours as home base for my weekend stay, because, in addition to being the only accommodations right in Monument Valley, Goulding’s operates a museum, open to the public, in the trading post and original stone home of Harry Goulding.

Harry Goulding, known as “the man who brought Hollywood to Monument Valley,” convinced director John Ford to use Monument Valley as the setting for his western movies in the 1930’s. 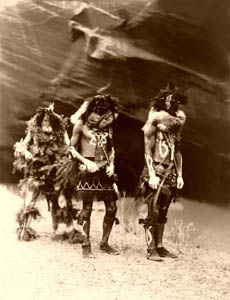 The museum, filled with memorabilia of Goulding’s friendships with John Ford, John Wayne, and other Hollywood celebrities, had kept me entertained all evening, followed by the Earth Spirit Show, a film showcasing the stunning images of photographer Ric Ergenbright. Retiring to my room, I’d popped the movie Stagecoach in the VCR, chosen from a selection of locally filmed videos available at the front desk.

Ford filmed Stagecoach in 1939, the first of many movies made here, including the more recent Vertical Limit in 2000 and 2001’s Windtalkers, starring Nicholas Cage. Despite what you saw in Vertical Limit, though, rock climbing is off-limits in Monument Valley.

Visitors can, of course, drive the 17-mile loop, which descends through the valley past Navajo homes. However, Ronnie Biard, the Operations Manager of Goulding’s Lodge and Tours, says, “If you don’t get a guide you’re missing the boat. With a guided tour, you get the Navajo culture, and you get to go into the backcountry which would otherwise be off-limits.”

True, indeed, I muse, as Harold maneuvers our jeep along the bumpy road through the unspoiled landscape. Fluffy cumulus clouds drift across a pale sky that turns bluer by the minute, and we make our first photo stop by a group of horses grazing on the roadside.

Harold regales me with Navajo myths and then explains why he started Simpson’s Trailhandler Tours six years ago — to share with others his experience as a Navajo growing up in Monument Valley.

He conveys his love of the land by fondly pointing out arches, buttes, and columns with enchanting names such as “The Three Sisters”, “Sleeping Dragon”, and “Ear of the Wind.” He and Richard laugh as they recall childhood adventures here, such as sliding down winter snow-covered dunes on the hood of a car.

Rounding a large rock formation we behold our next stop — a genuine Hogan where an elderly Navajo woman named Suzie Yazee will demonstrate the art of weaving.

From the outside, the round, mud structure blends into the umber sand. We duck through the east-facing doorway, leaving the brightness behind to enter the one-room home.

Warmth radiates from a crackling fire. Suzie gives us a gap-toothed grin as we examine the sheepskin rugs that cover the clay floor, the smoke hole that pierces the domed roof, and colorful woven carpets that decorate the floors and walls.

The word Hogan (Hooghan) means “place home”, combining the meaning of “home” and a “sense of place.” Despite the primitive lack of electricity and running water, it’s a cozy shelter against whipping winds, summer heat and winter cold. 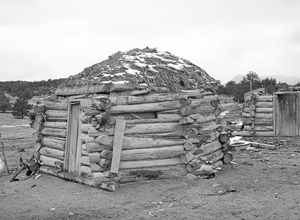 “Navajos began demonstrating rug-weaving to tourists in the 1940s,” Harold says, explaining the process while Suzie spins and weaves. Seeing her pull loose a strand of soft, grey wool through the border, I remember the legend of Spider Woman, a Spirit Being who taught that every Navajo blanket must be woven with a pathway in the border, to keep the weaver’s spirit from being imprisoned by the blanket’s beauty.

We say good-bye to Suzie, and then hike to an arch called “Big Hogan”, where a natural Indian profile appears on the wall. Harold walks behind a nearby dune, and we rest against the cool rock.

“Look up,” says Richard. Overhead, skylight filters through the hole in the arch. Suddenly, the earthy strains of Harold’s Native American flute echo off the walls, followed by a mesmerizing chant to the beat of a primeval drum.

We are brought back to the present when we hop in the jeep and drive to a rock formation called “The Titanic.” Needless to say, the rock has been weathered into the shape of a ship, sinking into a sea of sand.

At John Ford Point, the filming location of Stagecoach, we see Frank Jackson, the “Navajo John Wayne.” Clad in vivid red, he rides his horse out on the mesa – a perfect opportunity for photographs.

In this unchanging vista time seems to stand still, yet my watch tells me hours have passed. Tomorrow I will see the Ancient Puebloan ruins in nearby Mystery Valley, but already the trip scores high. I came here for the stories, and I’d heard many – from Harold’s ancient Navajo myths to Harry Goulding’s Hollywood tales.

We drive back to the Visitors Center, and I see the Mittens once more, still waiting for the Gods to return. They are symbols of this enduring land, a place, I am certain, that will inspire people for ages to come. 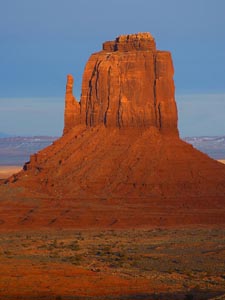 About The Author:  Travel writer Melody Moser’s articles and photos have appeared in publications such as The Orlando Sentinel, The AAA Touch, Arabella Romances Magazine, Connecting Solo Travel News, The Globe, and GoNomad.com; she also writes regularly for The Tourist News, a supplement to The Miami Herald. Article provided by:  Ezine Articles