At the end of the 19th century, the Southeast Texas economy relied on agriculture, cattle ranching, and the lumber business, and though the presence of oil was known, it wouldn’t be until 1901 that the oil industry would change the landscape of the region. 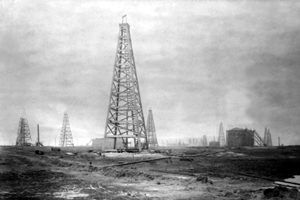 In the 1500s, the Spanish used oil from seeps near Sabine Pass for caulking their ships, and to the north, settlers near Nacogdoches used seeping oil for lubricants before 1800. In 1847 the settlers at Sour Lake noticed that oil was bubbling to the surface, and after the Civil War, at least one unsuccessful attempt was made to drill a well there. There were numerous discoveries in east and central Texas in the later years, especially at Corsicana in 1896. More attempts were made to drill wells at Spindletop 1893 and 1896 and at Sour Lake in 1896, but there would no significant oil production along the Gulf Coast until the Lucas Gusher came in on Spindletop Hill on January 10, 1901.

Spindletop Hill, a salt dome oil field, was located in the southern portion of Beaumont, Texas. There had long been suspicions that oil might be under the hill as the area had been known for its sulfur springs and bubbling gas seepages that would ignite if lit. In August 1892, several men including George W. O’Brien, George W. Carroll, and Pattillo Higgins formed the Gladys City Oil, Gas, and Manufacturing Company to do exploratory drilling on Spindletop Hill. 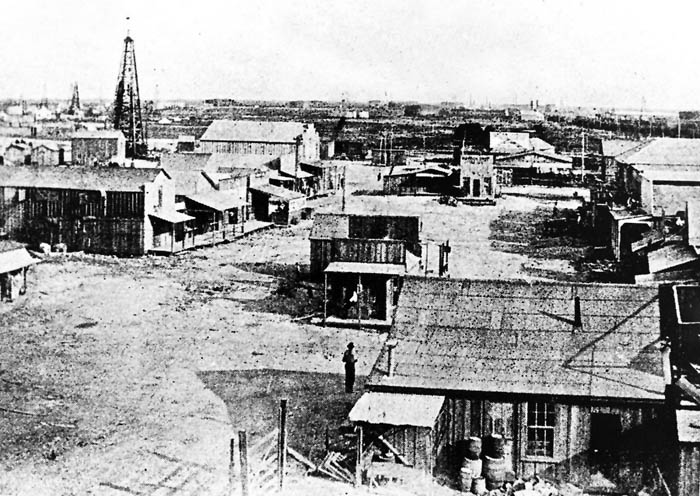 Pattillo Higgins also promoted the new town of Gladys City, named after Gladys Bingham, a young resident of Beaumont. In the same year that Higgins partnered in the oil company, he unveiled ambitious plans for an industrial and residential complex that was to be part of the Gladys City Oil, Gas, and Manufacturing Company. Located on the Southern Pacific Railroad line, three miles south of Beaumont, Higgins presented a rough plat outline. In the meantime, the Gladys City Company continued to drill a number of holes, which came up dry resulting in trouble as the investors began to resist pouring more money into the operation with no oil to show for it. 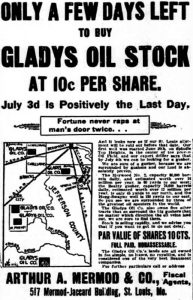 Pattillo Higgins left the company and teamed with Captain Anthony F. Lucas, the leading national expert on salt dome formations. Lucas made a lease agreement in 1899 with the Gladys City Company and a subsequent agreement with Higgins. Lucas drilled to 575 feet before running out of money. He was also having great difficulty with the tricky sands of the salt dome. Despite the negative reports from contemporary geologists, Lucas remained convinced that oil was in the salt domes of the Gulf Coast.

He finally secured additional funding from John H. Galey and James M. Guffey of Pittsburgh, but the deal left Lucas with only an eighth share of the lease and Higgins with nothing. Nonetheless, Lucas pressed ahead in his effort to vindicate his theories. Galey and Guffey played a crucial role by bringing in Al and Curt Hamill, an experienced drilling team from Corsicana.

From October to January 1901, Lucas and the Hamills struggled to overcome the difficult oil sands, which had stymied previous drilling efforts. However, on January 10, 1901, things changed. The startled roughnecks fled as six tons of four-inch drilling pipe came shooting up out of the ground. After several minutes of quiet, mud, then gas, then oil spurted out, blowing a stream of oil over 150 feet high until it was capped and flowed an estimated 100,000 barrels a day. Lucas and the Hamills finally controlled the geyser on January 19, when a huge pool of oil surrounded it.

Spindletop was the largest gusher the world had seen and catapulted Beaumont into an oil-fueled boomtown. Beaumont’s population of 10,000 tripled in three months and eventually rose to 50,000. Speculation led land prices to increase rapidly and by the end of 1902, more than 500 companies had been formed, including Gulf Oil and Texaco, and 285 wells were in operation. 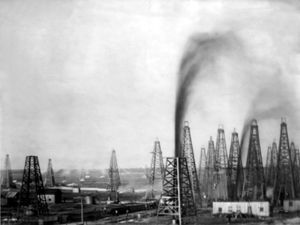 In the meantime, Higgins’s dream of establishing a major manufacturing center at Gladys City never came to fruition. The little would-be community of Gladys City was overrun by eager wildcatters and roughnecks in the wake of the discovery of the adjacent Spindletop oilfield. The Gladys railroad stop was apparently replaced by that of nearby Guffey soon after the Spindletop boom.

Spindletop was the first oil field found on the US Gulf Coast and prompted a frenzy of oil exploration known as the Texas Oil Boom. The United States soon became the world’s leading oil producer.

Standard Oil, which then had a monopoly or near-monopoly on the petroleum industry in the eastern states, was prevented from moving aggressively into the new oil field by state antitrust laws. Populist sentiment against Standard Oil was particularly strong at the time of the Spindletop discovery. In 1900, an oil products marketing company affiliated with Standard Oil had been banned from the state for its cutthroat business practices. Although Standard built refineries in the area, Standard was unable to dominate the new Gulf Coast oil fields the way it had in the eastern states. As a result, a number of startup oil companies at Spindletop, such as Texaco, Gulf Oil, Sun Oil, Magnolia Petroleum Company, and Humble (later Exxon Company), grew into formidable competitors to Standard Oil. 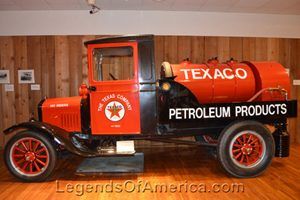 The Spindletop Oil Boom would spawn some of the most successful oil companies, including Texas Co (Now Texaco/Star Enterprises). Photo at the Texas Energy Museum, Beaumont.

By September 1901, there were at least six successful wells on Gladys City Company lands. Wild speculation drove land prices around Spindletop to incredible heights. One man who had been trying to sell his tract there for $150 for three years sold his land for $20,000; the buyer promptly sold to another investor within fifteen minutes for $50,000. One well, representing an initial investment of under $10,000, was sold for $1,250,000. Legal entanglements and multimillion-dollar deals became almost commonplace. An estimated $235 million had been invested in oil that year in Texas; while some had made fortunes, others lost everything.

The overabundance of wells at Spindletop led to a rapid decline in production after 1902, and the wells produced only 10,000 barrels per day by February 1904. But, all was not finished at Spindletop as a second boom came when the Yount-Lee Oil Company brought in its McFaddin No. 2 at a depth of about 5,400 feet on November 13, 1925. This and other discoveries on the flanks of the salt dome set off another speculative boom.

Over the ten years following the McFaddin discovery, more than 72 million barrels of oil were produced. Spindletop continued as a productive source of oil until about 1936. Later, it was mined for sulfur from the 1950s to about 1975. In 1963–66 even deeper oil production was achieved with an average depth of 9,000 feet. The old field continued in the 1990s to yield very limited oil production in the form of stripper wells and salt brine production. 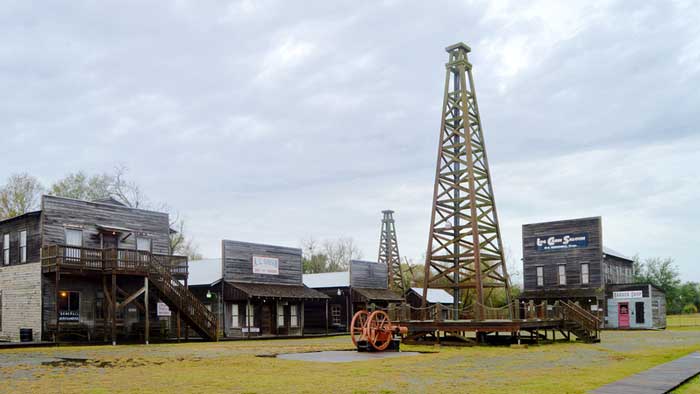 The discovery of the Spindletop oilfield had an almost incalculable effect on world history, as well as Texas history. Eager to find similar deposits, investors spent billions of dollars throughout the Lone Star state in search of oil and natural gas. The cheap fuel they found helped to revolutionize American transportation and industry. Storage facilities, pipelines, and major refining units were built in the Beaumont, Port Arthur, Sabine Pass, and Orange areas around Spindletop.

A replica of what the old town of Gladys City might have looked like was built in 1976 through the combined efforts of the Lucas Gusher Monument Association, the Heritage Committee, the Southeast Texas Chapter of the American Institute of Architects, and Lamar University. The museum features an oil derrick and many reconstructed Gladys City building interiors furnished with authentic artifacts from the Spindletop boomtown period.

The Lucas Gusher Monument is located at the museum. The Monument, originally erected at the site of the Spindletop well in July 1941, was moved to the Spindletop-Gladys City Museum after it became unstable due to the ground sinking. 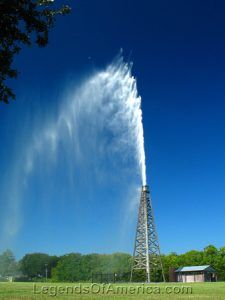 Spindletop Gusher recreation. Photo Courtesy of the City of Beaumont.

Today the wellhead is marked at Spindletop Park by a flagpole flying the Texas flag. It is located about 1.5 miles southwest of the museum, off West Port Arthur Road/Spur 93. The site includes a viewing platform with information placards, about a quarter-mile from the flagpole. The wellhead site is in the middle of swampland on private land and is not accessible. Tank farms and oil wells now mark the unrealized community of Gladys City.