When you think Texas, Oil exploration is top of mind, and there is no better example of the rich history in crude than in Beaumont. The Texas Energy Museum opened in 1990 in the downtown district, and today explores the history, various equipment used, and companies associated with the Texas Oil Boom of the early 1900s. Exhibits and videos walk you through the timeline of Texas Oil and explain how the various products are gathered from the area’s many Oil Refineries. Explore the fascinating world of petroleum science & technology from the geological formation of oil to modern refining chemistry. 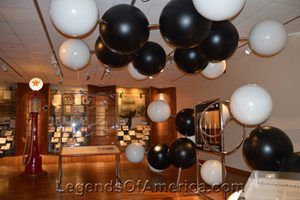 You’ll really enjoy the animated exhibits with talking characters, including Patillo Higgins and Captain Anthony F. Lucas, and their roles in the nation’s first big oil gusher at Spindletop, the Lucas Gusher.  The characters tell the tale of how Higgins was mocked for insisting large amounts of Oil were just waiting to be found here, and how Lucas prevailed in finding it.

The Spindletop find in 1901 ushered in a huge migration as thousands came to work the fields and strike it rich. In 1900, the population of Beaumont was 8,500. Within 30 days of the Lucas Gusher, the population boomed to 30,000. 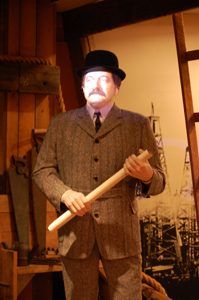 The boom would also leave a lasting impact on the U.S., bringing in the nations industrial age and spawning some of the most successful oil companies, including petrochemical giants Guffey Petroleum Co. (Gulf, now Chevron), the Texas Co. (now Texaco/Star Enterprises), Standard Oil (Exxon) and Magnolia Petroleum Co. (Mobil), which has merged into Exxon‑Mobil. The museum features exhibits of these companies past glories and provides a visual peek at what has made the Lone Star State so critical to our nation.

Although drilling for oil had already started transforming America in other states by the late 1800s, there’s no doubt that the boom around Beaumont and Texas as a whole, played a major role in making our Nation a superpower.

Designed to thrill, educate, and enlighten all ages, this is the definitive exhibit of the Texas oil industry, tracing the impact of the oil discovery in 1901, the present, and into the future. 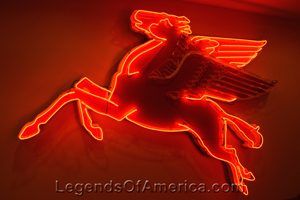 Mobil Pegasus at the Texas Energy Museum by Dave Alexander.

Gladys City and the Spindletop Gusher