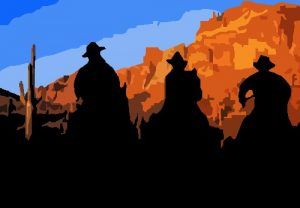 Though feuds and range wars were rampant throughout the American West, it seems the Lone Star State wins the “prize” for having the most. In virtually every county in the state, bitter wars were waged, often beginning with a few family members before growing to include hundreds of men. From disputes arising out of Civil War sympathies to cattle thievery, and old-fashioned arguments between neighbors, the Lone Star State was not only filled with violence stemming from numerous outlaw factions but also from locals killing each other.

Early-Hasley Feud (1865-1869) – A family feud in Bell County, Texas became much embittered after the Civil War.

El Paso Salt War (1877)  – A feud that occurred over the salt flats of the Guadalupe Mountains that culminated in a bloody battle in the small town of San Elizario.

Horrell-Higgins Feud (1877) – This family feud grew out of accusations of cattle theft in Lampasas County, Texas.

Jaybird-Woodpecker War (1888-1890) – A political war in Fort Bend County, Texas over control of the county.

Lee-Peacock Feud (1867-1871) – One of the best known of all the feuds in Texas, the Lee-Peacock Feud in northeast Texas following the Civil War, this was not simply a dispute between families, but a continuation of the Civil War, lasting four bloody years after the rest of the nation had laid down their arms.

Mason County War, aka: Hoodoo War (1874-1876) – A battle between rival German immigrants and native Texans which occurred when large numbers of cattle began to be killed or go missing.

Regulator-Moderator War, aka: Shelby County Property War (1839-1844) – The first major feud to break out in Texas was born during Texas’ days as a republic. For years, a strip of land in East Texas that bordered Louisiana and Mexico had been ignored by Spanish, Mexican and Texas authorities. By the time Texas became a republic, the swatch of land had developed into a lawless place where land frauds, cattle rustlers, and killings were common.

Sutton-Taylor Feud (1868-1873) – This family feud that grew out of the bad times following the Civil War occurred in DeWitt County, Texas and was one of the longest and bloodiest in the state.