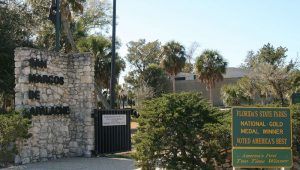 At the junction of the Wakulla and St. Marks Rivers, Fort San Marcos de Apalache in western Florida was the site of three Spanish forts between 1679 and 1821. Spain occupied this river junction at present-day St. Marks to protect its trade routes and its claim to Florida.

The first Spanish structure at Fort San Marcos de Apalache was a wooden fort built by Spanish colonizers in 1679, which held 45 Spanish soldiers and 400 Apalachee Indians. Spain lost the fort after an attack by English, French, and Indian raiders in 1682, but quickly recovered the site.  However, the British threat and pirate attacks forced Spain to consolidate its presence in Florida. British forces from South Carolina and their Creek Indian allies invaded Spanish Florida in the early 18th century. The British destroyed several Spanish missions, enslaved thousands of Apalachee Indians, and crippled the Spanish colony. During this war, the Spanish burned down their wooden fort and abandoned San Marcos.

Spain returned to San Marcos in 1718. Led by Captain José Primo de Rivera, Spanish soldiers built a sturdier wooden fort there to establish a stronger defense against attackers, and in 1739, they began constructing a large stone fort. This stone fort was still under construction when Spain agreed to give Florida to Britain in 1763. This deal was part of the Treaty of Paris, which ended the global conflict commonly known in the U.S. as the French and Indian War. Twenty years later, as part of a series of treaties forged in France in 1783 between the newly independent United States, France, Spain, and Great Britain, Britain returned Florida to Spain.

Spain occupied Fort San Marcos de Apalache a third time between 1787 and 1818. San Marcos was a small garrison but continued to be an important and thriving center for Indian trade.

General Andrew Jackson seized and occupied the fort in 1819. It became a United States possession in 1821 upon purchase of the territory from Spain. It was occupied as an army post until 1824 when the Indians were moved to a reservation. 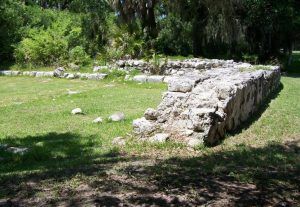 The fort was re-established and occupied by the Confederate Army during the Civil War and renamed it, Fort Ward. A Federal Naval attack on the fort was repulsed in 1865.

Today, San Marcos de Apalache is a National Historic Landmark and the site of the San Marcos De Apalache State Park in St. Marks, Florida. Here, visitors can see the remains of the Spanish forts as well as Civil War-era earthworks.