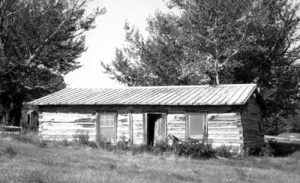 Reed’s Fort, located in what is now Lewiston, Montana was a trading post established by Alonzo S. Reed and John Bowles in November 1874 to capitalize on the trade along the old Carroll Trail between Helena and Crow Island at the mouth of the Musselshell River.

The Reed and Bowles Trading Post was located on lower Spring Creek and also operated as the only stage stop for 150 miles between Carroll and Martinsdale.

Reed, who had earlier served four short months as an Indian agent at the Milk River Agency in 1870, went by the title of “Major,” though it is doubtful he ever served in any true military capacity. While serving his brief time as an Indian agent, he was dismissed for misconduct which included trafficking in alcohol and firearms, stealing agency property, including cattle, falsifying sales receipts, and trading agency items to the Indians for furs. He was also accused of killing an Assiniboine Indian. Though he was dismissed; he was not charged with any criminal activities, though, clearly he was involved with them. Later, when he and John Bowles opened their trading post, which was often referred to as the Reed and Bowles Trading Post, the pair acted no better.

Having a reputation of readily accepting gunfire as the accepted method of ending any arguments, they quickly gained a rough reputation throughout the territory. However, as the only post in the area, travelers, traders, and hunters had little other choices when needing supplies. During this time, the post’s main business consisted of trading with Indians, chiefly in low-grade liquor. Although selling liquor to the Indians was outlawed by the Federal government, the post was about 100 miles beyond the reach of any legal authority, and the two men happily continued on with their profitable trade.

Trading with the Indians

In 1880, when numerous people began to settle in what would later become Lewistown, Reed took up new land and established another trading post nearer to the population. Soon, there were “settlements,” one which Reed called Reedsfort, and another trading post just ½ mile away called Fort Janeaux, operated by Francis Janeaux, a popular trader with the Metis people who had settled the area. Within no time, Janeaux and Reed became intense rivals for the trade of area residents, which numbered less than 100. Reed established the first post office in 1881, which was officially called “Reedsfort.”

However, one area resident named Dr. L. A. Lapalme, who was a friend of Janeaux’s and disgruntled with the mail service began to circulate a petition for a new post office. Charging Reed “with gross neglect of his duties and some irregularities,” it was known that Reed’s partner, John Bowles, would simply put all the mail in a box that was placed on the floor in the corner of a room. When residents came into to get their mail, they were forced to sort through all the mail to find their own. One local resident named David Hilger would later say that “Reed was one angry postmaster when he read those charges!” Hilger would also say that Reed had confronted him when he found out that Hilger had signed the petition and Hilger “immediately envisioned a new mound in Major Reed’s private cemetery.” After some fast-talking, Hilger finally convinced Reed that he had not read the petition that he had signed and Reed let him go unharmed. The post office also served a wide area surrounded by Fort Maginnis, Judith Gapo, and Philbrook. During the winter of 1881-1882, the mail was only delivered three times.

Either Lapalme’s petition worked or Reed finally gave up, as he sold his holdings to Frank Day in 1882, who became the new postmaster. The following year, the post office name was changed to Lewistown. By 1890, the building was included in the county’s poor farm property. The old post office/trading post was saved by Lewistown residents and today continues to stand in its original location in a park below the mouth of Casino Creek in Lewistown.