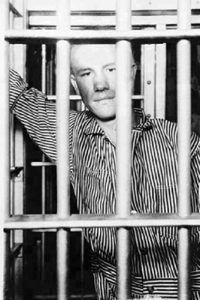 Raymond Elzie Hamilton, aka: Floyd Beatty An associate of the Barrow Gang, Raymond Hamilton was one of the best-known desperadoes of the 1930s.

Born in a tent near Schulter, Oklahoma to Alice and John Hamilton on May 21, 1913, Hamilton was one of six children. He was raised in Dallas, Texas and as a young man, he met Clyde Barrow and went on to join the Barrow Gang. He participated in the killing of Undersheriff Eugene Moore in Stringtown, Oklahoma on August 5, 1932. Raymond was eventually captured and was serving 266 years in prison for auto theft, armed robbery, and murder at the Eastham prison farm north of Huntsville, Texas. However, in January 1934, Clyde Barrow and Bonnie Parker raided the farm and feed him along with four other prisoners. One of the other escapees, Joe Palmer, killed a guard and caused a series of events which led to Texas Prison System Chief Lee Simmons to issue a shoot to kill order against Clyde Barrow and Bonnie Parker.

The diminutive 5’3″ tall man soon took up with Mary O’Dare after her outlaw husband, Gene O’Dare, was serving 99 years in prison for bank robbery. Bonnie and Clyde and other members of the gang were not fond of Mary O’Dare, characterizing her as a prostitute and gold digger. Clyde Barrow snubbed the 19-year-old girl whenever possible and often called her “washerwoman” to her face. Raymond soon fell out with Clyde Barrow when he and Mary were caught stealing money after a robbery. Raymond and Mary left the soon left the Barrow Gang. However, he was soon captured on April 25, 1934. He was sent to the Texas State Penitentiary, Huntsville where he was executed on May 10, 1935, for the murder of the guard in the earlier escape from Eastham Prison. As Hamilton walked calmly to the electric chair, his last words were “Well, goodbye all.” He was preceded to the electric chair by Joe Palmer.

he FBI and the American Gangster