The Operations in West Louisiana, also called the First Bayou Teche campaign, was a brief military operation of the Civil War in April 1863.

In March 1863, Union commander Nathaniel P. Banks, headquartered near New Orleans, wanted to drive back the Confederate forces in western Louisiana and secure a route to connect with the Mississippi River north of Port Hudson, a Confederate strong point. Using a combined force of infantry and Union Navy vessels, Banks advanced up the Bayou Teche against Confederate units under the overall command of Major General Richard Taylor. 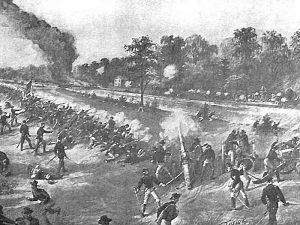 Fort Bisland – April 12, 1863 – Part of the Operations in West Louisiana campaign, this battle took place on an expedition up Bayou Teche. Led by Major General Nathaniel P. Banks, two divisions crossed Berwick Bay from Brashear City to the west side at Berwick on April 9th. On the 12th, a third division went up the Atchafalaya River to land in the rear of Franklin, intending to intercept a Rebel retreat from Fort Bisland or turn the enemy’s position. Major General Richard Taylor sent Colonel Tom Green’s regiment to the front to ascertain the enemy’s strength and retard his advance. On the 11th, the Yankees began their advance in earnest. Late on the 12th, Union troops arrived outside the defenses in the battle line. An artillery barrage ensued from both sides until dark when the Yankees, many of whom were hit by Rebel cannon fire, fell back and camped for the night. About 9:00 am on the 13th; the Union forces again advanced on Fort Bisland. Combat did not begin until after 11:00 am and continued until dusk. In addition to Rebel forces in the earthworks, the gunboat Diana, now in Confederate hands, shelled the Yankees. U.S. gunboats joined the fray in the late afternoon. The fighting ceased after this. Later that night, Taylor learned that the Yankee division that went up the Atchafalaya and landed in his rear was now in a position to cut off a Confederate retreat. Taylor began evacuating supplies, men, and weapons, leaving a small force to retard any enemy movement. The next morning, the Yankees found the fort abandoned. Fort Bisland was the only fortification that could have impeded this Union offensive, and it had fallen. The Union victory resulted in 234 Union casualties and 450 Confederate. 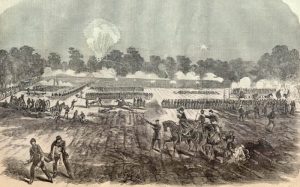 Irish Bend – April 14, 1863 – The Battle of Irish Bend, also known as the Battle of Nerson’s Woods or Franklin, was fought during the Operations in West Louisiana campaign. While two Union Army Corps divisions moved across Berwick Bay towards Fort Bisland, Brigadier General Cuvier Grover’s division went up the Atchafalaya River into Grand Lake, intending to intercept a Confederate retreat from Fort Bisland or turn the enemy’s position. On the morning of April 13, the division landed in the vicinity of Franklin, Louisiana, and scattered Rebel troops attempting to stop them from disembarking. That night, Grover ordered the division to cross Bayou Teche and prepare for an attack towards Franklin at dawn. In the meantime, Confederate Major General Richard Taylor had sent some men to meet Grover’s threat. On the morning of the 14th, Taylor and his men were at Nerson’s Woods, around a mile and a half above Franklin. As Grover’s lead brigade marched out a few miles, it encountered Rebels on its right and began skirmishing with them. The fighting became intense; the Rebels attacked, forcing the Yankees to fall back. The gunboat Diana arrived and anchored the Confederate right flank. However, the Confederates were outnumbered, and, as Grover began making dispositions for an attack, they retreated, leaving the field to the Union. Along with the one at Fort Bisland two days earlier, this victory assured the expedition’s success into West Louisiana. The Union victory resulted in 353 Union casualties, but the Confederate casualties are unknown.

Vermillion Bayou – April 17, 1863 – This battle was fought during the Operations in West Louisiana campaign. While Rear Admiral David G. Farragut remained above Port Hudson with USS Hartford and Albatross, Major General Nathaniel P. Banks decided to go after Major General Richard Taylor’s Confederate forces in western Louisiana. He moved by water to Donaldsonville and began a march to Thibodeaux up Bayou Lafourche. Banks beat Taylor at Fort Bisland and Irish Bend, forcing the Rebel army to retreat up the bayou. Taylor reached Vermillionville, crossed Vermillion Bayou, destroyed the bridge, and rested. Banks, in pursuit, sent two columns, on different roads, toward Vermillion Bayou on the morning of April 17. One column reached the bayou while the bridge was burning, advanced, and began skirmishing. Confederate artillery, strategically placed, forced the Yankees back. Then Federal artillery opened a duel with its Confederate counterpart. After dark, the Rebels retreated to Opelousas. The Confederates had slowed the Union’s advance. The number of casualties in the Union victory is unknown. 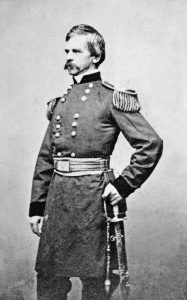 Commander Nathaniel P. Banks was so successful that Confederate Major General Richard Taylor retreated from the Teche region. Afterward, Banks was able to capture the Confederate fort at Butte a la Rose and Alexandria.