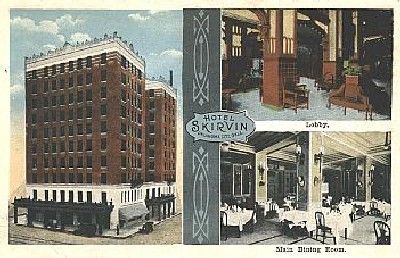 The Skirvin Hotel, built in 1910 by oilman W.B. Skirvin, determined to have the finest hotel in the Southwest. Opening its doors in 1911, the plush hotel had two 10-story towers containing 224 rooms, was one of the first buildings in Oklahoma City, Oklahoma to have air conditioning, then called “iced air,” had running ice water in each room, a ballroom that seated 500, and imported Austrian chandeliers that cost more than $100,000 each.

Skirvin’s daughter, Perl Mesta, brought the hotel a national reputation by being the ambassadress to Luxembourg, and then Washington’s “Hostess with the Mostess,” portrayed in the famed Broadway musical, “Call Me Madam.”

In 1930, a third wing was added, raising the structure to 14 stories and increasing capacity to 525 rooms.

The Oklahoma showplace became a popular speakeasy during Prohibition. During this time that W.B. Skirvin was said to have had an affair with one of the hotel maids. According to legend, the maid soon conceived, and to prevent a scandal; she was locked in a room on the top floor of the hotel. The desolate girl soon grew depressed, and even after the birth of her child, she was still not let out of the room. Half out of her mind, she finally grabbed the infant child and threw herself out of the window along with the baby.

The maid’s name remains unknown, but her ghost haunts the Skirvin Hotel, and former employees nicknamed “Effie”. Though the old hotel closed in 1988, former guests would often report not obtaining a decent night’s sleep due to the consistent sounds of a child crying. 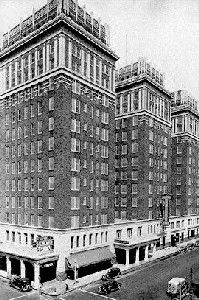 Effie was a woman of loose morals, and many men who have stayed in the hotel have often reported being propositioned by a female voice while alone in their rooms.  Others have seen the figure of a naked woman with them while taking a shower. One man even claimed an invisible entity sexually assaulted him during his stay.

Other strange noises and occurrences were reported by staff and guests, including things seemingly being moved around by themselves, such as the maid’s cart being pushed down the hall when no one was there.

In October 1979, the hotel was listed on the National Register of Historic Places. When it closed in 1988, the building stood empty for almost fifteen years. However, the historic hotel has now been fully restored and is now open once again for guests.

Despite the millions of dollars spent to renovate this historic hotel, Effie allegedly continues to reside there.

The Skirvin Hotel is located at 1 Park Avenue in Oklahoma City, Oklahoma.

Experiences at the Skirvin Hotel

NBA players from the New York Knicks claim their game was off after a night of haunts at the hotel in 2010. So have other NBA players staying at the hotel, according to a 2014 New York Times article. Maybe the ghost is attracted to NBA players, as there was another experience in 2016 by a Los Angeles Lakers teammate, according to this article from KFOR.

The city of Oklahoma City needs to abandon the Skirvin Hotel project. I’ve been inside before the renovations started in September of 2004. You can see objects moving with no one else around to be moving them, crying and screaming of a woman. I just don’t think it’s a good idea to be messing around with that place… Sam, October 2005

I’ve been in there, and it really is haunted. You can see the woman standing in the window she jumped out of. When you see her, she is at first standing far away and then run up to the window, and STOP!!! – Tina, October 2004