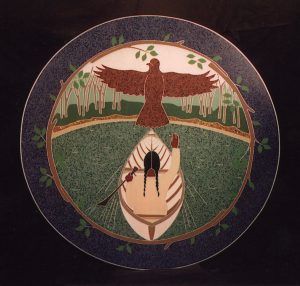 The Occaneechi Tribe lived primarily on a large, four-mile-long Occoneechee Island and east of the confluence of the Dan and Roanoke Rivers, near current-day Clarksville, Virginia in the 17th century. They were Siouan-speaking and thus related to the Saponi, Tutelo, Eno, and other Southeastern Siouan-language peoples living in the Piedmont region of present-day North Carolina and Virginia.

In 1676, in the course of Bacon’s Rebellion, the tribe was attacked by militias from the Colony of Virginia and decimated. Also under demographic pressure from European settlements and newly introduced infectious diseases, the Saponi and Tutelo came to live near the Occaneechi on adjacent islands. By 1714 the Occaneechi moved to join the Tutelo, Saponi, and other Siouan people living on a 36-square-mile reservation in current-day Brunswick County, Virginia. It included a fort called Christanna. The Siouan people in the area had been drastically reduced to approximately 600 people. Fort Christanna was closed in 1717, after which there are few written references to the Occaneechi. Colonists recorded that they left the area in 1740 and migrated north for protection with the Iroquois.

Although circumstantial evidence suggests that at least some of the remaining Occaneechi may have migrated northward with the Tutelo and Saponi to Pennsylvania and New York, a small community of Indians in North Carolina’s Orange and Alamance Counties, known as the Occaneechi Band of Saponi Nation, claim descent from the 18th-century Occaneechi and were officially recognized by the state of North Carolina in 2001.