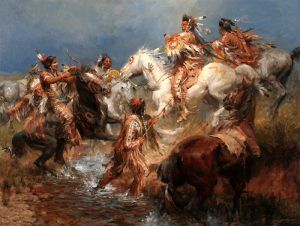 The Indian tribes of the regions about New Amsterdam became incensed against the whites by a thousand petty provocations, arising from the thoughtlessness and greed of the colonists, and, in return, committed such acts of revenge as seemed to demand chastisement from the government. The Raritan, a tribe residing on the west side of the Hudson River, were the first to feel the prowess of the white man. Both parties were sufferers in the conflict that took place, and the Indians gladly accepted the proffered terms of peace. Soon afterward, a Dutchman was killed by an Indian belonging to a tribe located near Tappan Bay, and the murderer was protected by his tribe, which resulted in the government sending 80 men to punish them. Alarmed at the threatened invasion, the Indians promised to give up the murderer. The expedition thereupon returned to New Amsterdam, but, the promise was never fulfilled. A quarrel subsequently broke out between the colonists and the Hackensack tribe, and two white men were murdered. The chiefs offered wampum (sacred shell beads) in atonement, which the governor refused, and demanded the murderers. Just before this time, the Tappan Indians, fearing an attack from the powerful tribes of the Mohawk, removed down into the neighborhood of New Amsterdam, and were mingled with the neighboring tribes, especially the Hackensack. Soon after, these united bands came and encamped in two bodies at no great distance from the fort. Their design was evidently not hostile; but, the occasion was seized by the enemies of the Indians at New Amsterdam, and an order to attack them was obtained from the governor, while under the influence of wine at a holiday feast. The attack was wholly unexpected by the Indians, and very little resistance was made. A terrible slaughter ensued. About 80 of the Indians, including old men, women, and children, perished miserably in the conflict or were afterward murdered in cold blood. The noise of the battle and the shrieks of the women and children could be plainly heard at the fort. The next day the war party returned to the town, bringing with them 30 prisoners.

These atrocities, with others of a like character that was soon after perpetrated, aroused the Indians to a high pitch of exasperation. Eleven small tribes united to make war against the Dutch, whose unprotected boweries, reaching in every direction many miles from New Amsterdam, offered an easy prey to the Indians. Many houses were burned, the cattle were killed, the men slain, and several women and children made prisoners. The terrified and ruined colonists fled on all sides into New Amsterdam, and, all who could, sailed for Holland. The expeditions sent against the Indians were only partially successful in subduing them, and, worst of all, discontent and mutual criminations distracted the councils of the governor. The Indians, at length, satiated with blood, offered terms of peace, which were gladly accepted by the whites, and a respite given from the bloody and ruinous conflict. 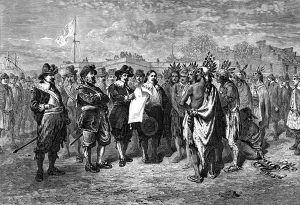 Treaty with the Indians at New Amsterdam

But, the peace was of short continuance. A new confederacy of seven tribes again spread consternation and ruin among the frontier boweries; the settlements beyond Newark Bay, and those on the west end of Long Island, were laid in ruins, and only three boweries were left on Manhattan Island. The colonists were clustered in straw huts about the fort, which was in a ruinous and hardly tenantable condition — themselves short of provisions, and their cattle in danger of starving. A palisade was erected to the north of the town, which remained for half a century, and is still commemorated in the name of the street (Wall-street) that finally took its place. The next year, in 1644, was occupied by an expensive and harassing Indian war. The Indians’ villages on Staten Island were burned, their corn destroyed, but, they themselves eluded their pursuers. An expedition against a small village in the vicinity of Stamford produced nearly the same results. Not so, however, with an expedition of nearly 200  men under the command of Captain John Underhill, sent against a hostile band near Hempstead on Long Island, where more than 100 Indians were killed, and more made prisoners. But, the greatest slaughter took place later in the season, when a second expedition, under the same commander, was made against the Indians in the neighborhood of Stamford. The villages were reduced to ashes, and fearful destruction of life occurred, with all the accompanying horrors that distinguished the famous Pequot War.

About this time a company of 130 soldiers arrived in the colony from the West Indies and were quartered in New Amsterdam. The Indians had suffered greatly during the summer and autumn, soon ceased active hostilities, and asked for peace. Treaties were made with the principal tribes during the ensuing year, by which, the Indians agreed to remove to considerable distances from New Amsterdam, and not to approach any of the settlements with their war parties; and so, the colony was once more freed from the horrors of savage warfare.

The settlements about New Amsterdam were almost ruined by these protracted wars, and at their close could number scarcely 100 men. Of the 30 flourishing boweries, but five or six remained, and everything bore like marks of ruin and disorder. Complaints were freely uttered against the administration of the governor, which at length, induced the directors to recall him. He accordingly sailed for Holland in a vessel laden with furs valued at nearly $100,000. However, the vessel was wrecked on the coast of Wales, and about 80 people, including Governor Kieft, perished.

The successor of Kieft was Peter Stuyvesant, the late governor of the Dutch West Indies — a soldier by profession, and a man of good parts and much energy of character. The beginning of his administration was distinguished by several considerable concessions of popular privileges. The monopoly of transportation, hitherto enjoyed by the company, was relinquished, and trade was thrown open to free competition — though New Amsterdam continued to be the only port of entry.

The population of the entire province of New Netherland at this time (1647) could not have been more than about 2,000 people — nearly half of whom were within the patroonship of Van Eensselaer. New Amsterdam was a village of wooden huts, with roofs of straw, and chimneys of mud and sticks, abounding in grog shops, and places for the sale of tobacco and beer. At the west end of Long Island, were six plantations, governed by a local magistracy, in part self-elected; but, New Amsterdam was still governed by the sole authority of the governor and his policies. About this time, Breukelen (Brooklin) first received a village charter.

In 1652 the inhabitants’ of New Amsterdam, by petitioning the authorities at home, obtained enlarged municipal privileges. A board of magistrates, or city court, was created, composed of two principal magistrates and five civic officers, annually selected by the governor from twice those numbers nominated by the magistrates of the preceding year. A movement was also made toward a still more popular form of government, by calling a convention of two delegates from each village, to provide against a threatened war with New England. But, the governor dissolved the convention as irregular and sneeringly characterized it as a New England invention, with which he would have nothing to do with.

For several years Governor Stuyvesant was chiefly occupied with the foreign relations of the colony, and, after protracted negotiations, all difficulties were adjusted with the New Englanders on the east and the Swedes on the south, and the province of New Netherland reposed in quiet and safety. However, the Dutch governor did not obtain all he wished in these negotiations; for while he claimed both the Connecticut and the Delaware Rivers as parts of his province, he obtained peace only by relinquishing both of them, and their territories. While engaged in these transactions with the neighboring colonies, the governor was in danger of suffering a loss in his own capitol. The Indians, taking advantage of the absence of the soldiers from the town, made a descent upon it with 60 canoes, causing great alarm, and doing some inconsiderable damage; but, they dispersed and disappeared as soon as the forces returned.