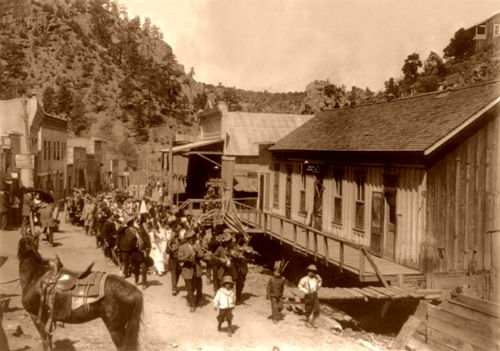 About 12 miles northeast of Glenwood, New Mexico, is one of the Land of Enchantment’s premier ghost towns – Mogollon (pronounced “muggy-YOHN” by locals). Today, a ghost towner’s dream, filled with historic buildings of the once rich mining camp that made millions during its heydays, survived numerous floods and fires but still hangs on today despite its isolated location.

It all began when a soldier named James Cooney from Fort Bayard, some 80 miles to the southeast, was scouting for the 8th U.S. Cavalry in nearby Mineral Creek Canyon 1870. North of where the mining camp of Mogollon would later be established, Cooney discovered rich gold and silver deposits, but unlike many miners of the times, he kept his find a secret. Unable to work his find as his “hitch” in the Army was not yet complete, Cooney returned to his duties.

However, several years later, when Cooney was mustered out of the service in 1876, he returned to the area, filing several claims. Not long after, Cooney and his partner, Harry McAllister, were chased out of the region by hostile Apache. Determined though, they returned two years later and began to work the rich veins in earnest. Word spread, and soon the area was crawling with numerous prospectors looking for their own fortunes. 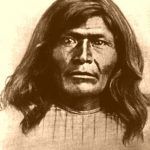 But, the miners remained at risk from the angry Apache. In April 1880, Chiricahua Apache, led by Chief Victorio, once again raided the area, including Cooney’s claim. Three of the prospectors, including retired Sergeant James C. Cooney, were killed. Also killed in what is called the “Alma Massacre” were 35 area sheepherders.

Though the Indian raids continued, it didn’t stop the flood of prospectors. James Cooney’s brother, Michael, having inherited the claim, soon arrived from New Orleans to continue his brother’s mining operations. Soon afterward, he built a vault from a large boulder as a permanent resting place for his fallen brother. The vault, sealed with silver-bearing ore taken from Cooney’s Mine, still stands at the Cooney Cemetery, located about 7 miles east of Alma, New Mexico.

In the meantime, several other miners had made discoveries, and soon the mining camp of Mogollon sprang up in Silver Creek Canyon, which included a sawmill and several businesses. In 1890, a post office and jail were established, and two years later, the first school was built. The Silver City and Mogollon Stage provided transportation and freight services to the camp, moving its “cargo” some eighty miles between the two points, a distance that took about 15 hours. 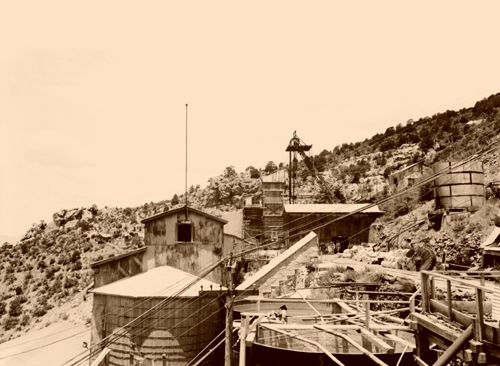 Mogollon Mill and Mine, 1940, Lee Russell

Several mines were developed in the area, including the Maud S., Deep Down, Last Chance, and the biggest and most profitable – the Little Fannie. Though it would employ the most people and drew out the most ore, it was also an extremely dusty mine, resulting in numerous “Miner’s Consumption” or “Black Lung” disease cases. This created a quick turnover at the mine as the town’s transient population surged and fell from between 3,000 and 6,000 residents during the 1890s.

During these days, Mogollon also earned a reputation as one of the wildest mining towns in the West, as gamblers, stage-coach robbers, claim jumpers, and gunmen were all called the mining camp home.

From its earliest days, Mogollon was plagued with fire and flood. The first big fire occurred in 1894, wiping out most of the town buildings. However, Mogollon’s citizens persevered, rebuilding, this time, with brick and adobe. That same year, the mining camp also suffered from a devastating flood from the melting snows and heavy spring rains. Other floods would follow in 1896, 1899, and 1914, all taking with them homes, mining operations, and some of the town residents as the swift waters overflowed from Silver Creek. More fires would also occur in 1904, 1910, 1915, and 1942, resulting in yet more devastation to the town. 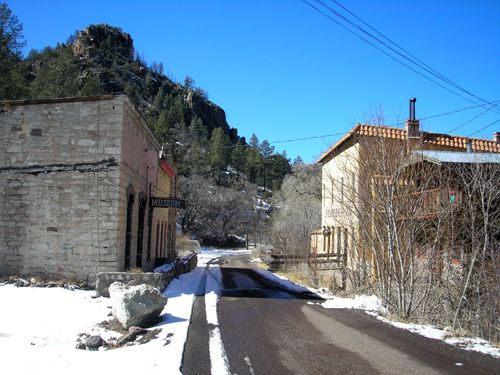 By 1909, Mogollon had a population of about 2,000 people who supported five saloons, two restaurants, four merchandise stores, two hotels, and several brothels located in two infamous red-light districts. It also boasted the Midway Theatre, a bakery, a photographer, a couple of doctors, and various other retail businesses.

Though its population was slowly dropping as technologies were advanced, and the ore began to diminish, the year 1913 saw about 1 ½ million dollars in minerals taken from the area mines.

In the meantime, Michael Cooney, who had taken over the original claims after his brother’s death, was also destined to tragedy. In 1914, he was still combing the mountains for yet more gold. However, in October, he failed to return home. Search parties were sent out to look for him, but they were forced to abandon their search at the high elevation and winter’s arrival. Four months later, Michael Cooney’s body was discovered in a nearby canyon. He had frozen to death.

By 1915, Mogollon’s population stood at about 1,500 residents, who enjoyed new utilities such as electricity, water, and telephones. 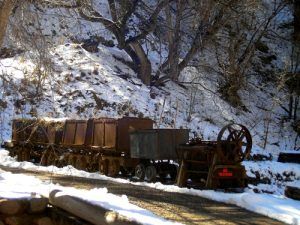 World War I caused the first devastating blow that would lead to Mogollon’s demise. During this time, the demand for gold and silver dropped, and many of Mogollon’s mines shut down. By 1930, the town supported only about two hundred people.

It recovered some in the late 1930s when gold prices went up again, but its renewed life was short-lived. World War II again slashed gold values and a devastating fire in 1942 nearly reduced it immediately to a complete ghost town.

However, its few remaining residents persevered once again as the Little Fanny Mine continued to produce until the early 1950s, when finally, it too, would stand forever silent. Over the years, Mogollon Mines produced nearly 20 million dollars in gold and silver.

With its mines silent, Mogollon officially became a ghost town, but some of its owners remained. Today, it is a ghost towner’s dream as nearly 100 historic buildings remain, along with about 15 residents. The entire town was placed on the National Register of Historic Places in 1987. In various repair stages, the numerous buildings are used primarily as residences, summer homes, and a few remaining open businesses, generally open on summer weekends. 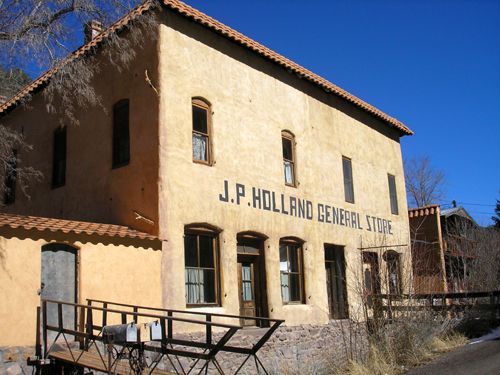 The building that once served as the Mogollon House and J.P. Holland’s Store is the Silver Creek Inn.

One of the most impressive buildings is the Silver Creek Inn, which continues to serve customers today in an 1885 two-story adobe structure was known as the Mogollon House. Built by Frank Lauderbaugh and operated by Henry Johnson, the Mogollon House rented upstairs rooms and sold food and merchandise on its first floor.

In 1914, the building was sold to a Philadelphia barber named James Holland, who opened a barbershop and general store on the first floor and continued to rent rooms on the upper level.  Holland continued to operate his businesses for more than three decades, until in 1948, with very few customers, he left the area and headed for California. A family then utilized the building as a home for many years.

In 1980, it was purchased by Stan King, who renovated it into a bed and breakfast called the Silver Creek Inn. The historic building continues to cater to customers today, providing rooms with character and great food. However, it is only open very seasonally.

Across the street stands a row of three historic stone buildings. The Mogollon Museum is housed in one of them, which once served as a general merchandise store for decades. Also, open seasonally, the museum displays local history and numerous mining artifacts. The museum is open on weekends from May through October. Next to the museum stands the old Holland’s Furniture and Notions store, as well as another historic two-story building. 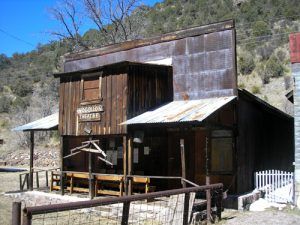 The old theatre in Mogollon, by Kathy Weiser-Alexander.

Further down the road is the old Silver Creek Stage Stop; the old Kelly Store, which continues to house antiques and curios; the Mogollon Theatre, Our Lady of Mt. Carmel Church, which is undergoing renovation as several old homes and cabins. A saloon and general store also stand; however, these are not original buildings, rather they were part of a 1973 movie set for a western called My Name is Nobody and starring Henry Fonda.

Beyond the church and up a very steep hill, the road winds some two miles upward to Mogollon’s 1891 cemetery. In 1918, Mogollon, like places worldwide, suffered from the deadly influenza pandemic that erupted during the final stages of World War I. Legend tells us that there is a mass grave of flu victims at the cemetery due to people dying faster than they could bury them. However, there is no marked site. A high-clearance four-wheel-drive vehicle is required to drive up the rough road.

Mogollon is about 12 miles northeast of Glenwood, New Mexico. To get there from Glenwood, take NM 180 about 3 miles northwest to NM-159 (Bursum Road) and turn right (east.) Bursom Road travels through the San Francisco River Valley, at first slowly climbing through fertile ranchlands for about two miles before quickly ascending the west flank of the Mogollon Mountains.

Along the more than 2,000 foot ascent, the road becomes steep and narrow in many places before reaching Mogollon some seven miles later. Along the way, there are several spectacular views, and the terrain is dotted with mining remains. Also, watch for abundant wildlife, including small herds of Javelina (wild pigs) and glimpses of the White-Nosed Coati, a curious ring-tailed cat that inhabits parts of the southwest.

Silver Mining Adventures  (Our Travel Blog on this trip)