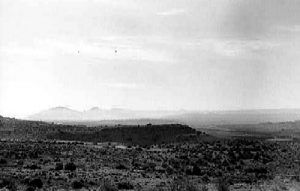 Gallup, New Mexico, is surrounded by ghosts — not the spooky, “raise the hair on the back of your neck” type ghosts, but rather, more than a dozen ghost towns. While some have a few buildings, perhaps a mine shaft and some ruins, others have been obliterated and taken over by the sagebrush, leaving nothing more than their memories and a few rolling tumbleweeds.

What happened to all of those towns? Why did they begin, and why did they end?

For the first half of the 20th century, McKinley County was primarily supported by plentiful coal mining. In fact, for a while, Gallup was called “Carbon City.”  Much of the early population were those European, Oriental, Mexican, and westward-seeking American workers who sought employment in the mines and built the rails. Many of these early towns were coal mining company towns, with little more to support their economies other than the mining itself. In many cases, the town’s banks and stores were owned by mining companies. So, when the mine shut down, so did the town.

Though McKinley County was created in 1889 and named in honor of President William McKinley, many of these towns didn’t begin until after the turn of the century. Even Gallup, the largest city in the county, was not incorporated until 1891. In 1901, Gallup became the county seat. 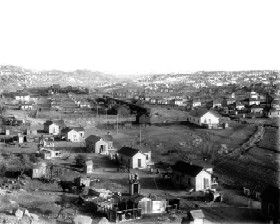 Heaton, also called Camp Heaton, was a coal-mining company town in Heaton Canyon, about 3 miles northeast of Gallup. Its post office opened in 1909 and closed in 1922. The Gallup American Coal Company operated the coal mine at Heaton. The community was founded in the early 1900s and was abandoned when the mine closed. Nothing remains of Heaton today as its buildings were moved to nearby Gamerco, also run by the Gallup American Coal Company.

Four miles west of Gallup was once the small town of Mentmore, New Mexico. The town began in 1913 when the Direct Coal Company opened the Dilco Coal Mine. Initially the camp was also named Dilco, but when a post office was established, the name became Mentmore. In 1918, George Kaseman of Albuquerque purchased the Dilco Mine property, and the Morris Mine was located a mile to the north. He combined the properties under the name of the Defiance Coal Company. 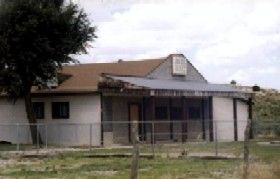 The town of Mentmore, built around the mines, comprised a company store, a post office, a school, and a power plant. The employees lived in the company-owned frame houses comprised of two to four rooms equipped with electricity and running water. Eight grades were taught at the Mentmore school, and free bus transportation to Gallup was supplied for the high school students. The population was about five hundred persons.

When the mines closed at Mentmore in 1952, the town closed too. In 1975 there was an operating combination store and post office, plus about ten houses in good repair remaining in the once-active coal town.

However, all that is left today is the old trading post, which now serves as a church, and a few foundations.

The townsite is privately owned. Mentmore is four miles west of Gallup on US Interstate 40, then exit at #16 north for one mile. 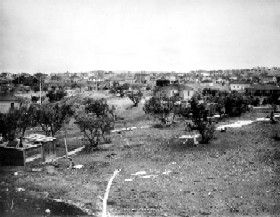 The opening of the Navajo coal mine by the American Fuel Company produced the camp of Navajo. Small frame houses were supplied to the residents by the company. A store and a hotel operated at the camp for a few years. About 1922, the Gallup American Coal Company sank the shaft at Gamerco, less than a mile west of Navajo, and the center of coal mining activity shifted there. The Navajo Mine closed, but many miners lived in the camp while working at Gamerco. In the mid-1930s, Navajo reported a population of six hundred. However, all of the buildings were moved before long, leaving nothing but mine dumps and foundations. 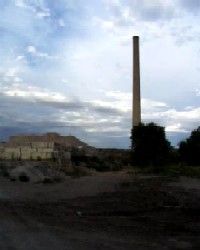 The Gallup American Coal Company began sinking shafts into coal deposits north of Gallup in 1920, and two years later, the newly formed camp of Gamerco witnessed the hoisting of the first coal. Even before mining was underway, the town was platted, and the Gallup American Coal Company moved abandoned homes from Heaton and Navajo, both nearby coal camps run by the company, to Gamerco, in addition to new ones that were being constructed. The company town was soon supplied with a company store, a meat market, a hotel, a clubhouse, a shower house for the miners, and an executive office building. The company also built several recreation facilities to keep their miners happy, including a golf course, swimming pool, tennis courts, and a baseball park. The company also provided a resident physician and nurse.

The company was diligent in its safety practices, no doubt to prevent a coal mining disaster such as the one that occurred in Dawson, New Mexico, several years earlier, which claimed 263 lives. Ninety percent of the underground employees were certified in rescue and first aid, the men were supplied with electric lamps, and only permissible low-heat explosives were used.

Surface received $5.60 for a seven-hour day, while those working underground were paid more. No one was allowed to work more than five days per week. The five hundred men on the payroll were not unionized and preferred to keep it that way. Strikes had occurred at various mines around Gallup, one in 1917 when the National Guard broke up the striking United Mine Workers. Another in 1922, resulting in increased wages, and a third in 1933, when the militia was again called to break up the National Miners Union strikers.

Finally, in the 1960s, the mines were closed for good, and Gamerco died.

In 1975, Gamerco still sported many of its original buildings, a giant steel headframe, and a towering smokestack from the power plant.

Even today, the town still has a few hanging on residents, but most buildings are gone. However, you can still see the towering smokestack as well as the remnants of several buildings.

Allison, New Mexico, located on a coal belt just northwest of Gallup, once flourished as a coal mining camp. Today there are just a few old company houses and mobile homes to indicate that this was ever a town.

Gus Mulholland first opened the mine where Andrew Casna later worked. However, his aggrieved widow fled to Germany when Casna was killed at the mine, presumably by Indians. Her failure to keep up the development work necessary to retain her husband’s claim resulted in a filing on the mine site by F. J. Allison and W. A. Patching in 1897. It was then that the town took its name for F.J. Allison. A post office was opened in 1913, and the pair continued to work the mine until 1917, when the Diamond Coal Company bought them out.

Allison was a company-owned town like most of the others in McKinley County. Employees lived in the small frame homes provided by the Diamond Coal Company. In addition to providing a livelihood for Allison residents, the company also furnished recreation for its employees through tennis courts and a company-sponsored baseball team. The town reported a population of five hundred, a company store, a meat market, a post office, a school, a doctor, and a sheriff.

Today the town has just a few residents.

Though the town is long gone, during its heyday, it was an important lignite coal mining camp operated by the Clark Coal Company. The camp, founded in 1898, was named for its owner, W.A. Clark, a well-known mining magnate and millionaire.

Clarkville was reportedly a pretty little place with comfortably-built houses. The town’s features were a two-story brick commissary, a school building, a library, and a hospital. At the time, the town claimed it possessed so many favorable characteristics that the miner and everyone living there was happy and contented. It was unique for these mining camps because Clarkville never had a saloon and prohibited the sale of liquor on its premises.

The mine had an electrical plant and a ten-ton electric locomotive that propelled the coal cars. Telephone connections ran between the mine and the town. In 1905, Clarkville had 400 residents, but two years later, it had decreased to 200. The post office closed in 1908, and Clarkville became a ghost town.

Clarkville was located about six miles northwest of Gallup.

Ghost Towns of the American West