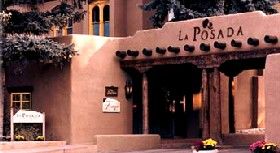 Amassing a fortune as a major supply contractor for the U.S. Army during the Civil War, Abraham Staab built the beautiful three-story brick mansion for his wife Julia. Constructed in the French Second Empire-style, the residence was decorated with the finest European materials and furnishings.

The large Staab family, including six children, primarily lived on the second floor, accessed by a grand staircase.  On the third floor was a beautiful ballroom which soon became one of the social entertainment centers of Santa Fe society, as Julia loved to show off the home that she adored.

However, the Staab family’s fairy tale life was to end when Julia’s seventh child, a son, died soon after his birth. Deeply affecting, Julia, she dived into a deep depression and her hair was said to have turned prematurely white.  After this child’s death, Julia underwent several more unsuccessful pregnancies and eventually took to her room, where she spent almost all of her time until her death at the age of 52 in 1896.  Rumors at the time persisted that in Julia’s later years, she had gone completely crazy.

The surviving six Staab children grew up in the house and upon its spacious grounds. In the early 1900s, the original third-floor ballroom was destroyed by fire. Abraham Staab died in 1913.

In the 1930s, R.H. and Eulalia Nason became the owners of The Staab House and surrounding estate with plans to turn the property into a hotel.  They soon constructed a series of Pueblo Revival-style adobe casitas around the existing Staab Mansion and carriage house. The Nasons called their new business La Posada, Spanish for “inn” or “resting place.”

In the years to follow, the La Posada became a popular place to be for the arts community.  A summer arts school held there every summer drew many guests, who were leaders in the Santa Fe arts movement.

Over the years, La Posada de Santa Fe has served the world of literature and cinema by accommodating numerous writers and other well-known personalities.  However, legend has it that not only has the La Posada hosted these famous guests and well as thousands of travelers who enjoy the hotel’s romantic ambiance, but also the ghost of Julia Staab.  Reportedly Mrs. Staab loved her home so much that she has never left it.

Numerous reports have been made that Julia Staab’s spirit continues to interfere with hotel employees and guests.  One of the first recorded reports in 1979 tells of an employee who was cleaning late in the night and looked up to see a beautifully dressed translucent woman standing near a fireplace. On another occasion, a security guard saw the same woman and was so scared he took off running.  A hotel operator reported saw her reposing in an armchair.  In all three cases, the spirit vanishes shortly after she appears.

More recent reports include a bartender who states that during a particularly busy evening, glasses suddenly began to fly off the shelves, one by one, crashing to the floor. On this same night, the fireplace kept turning on and off, seemingly of its own accord and a seasoned waitress continually dropped trays, reported that it felt as if someone had pushed them up from underneath. 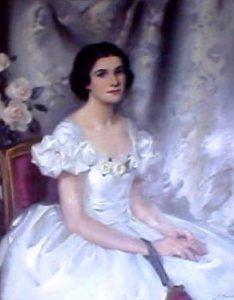 Julia’s alleged spirit has been the subject of many ghost tours, as well as having been featured in the popular television shows Unsolved Mysteries and Weird Travels.

After an extensive renovation in the late 1990s that included the construction of additional lodging, Avanyu Spa, and the Conference Center, La Posada opened as a member of RockResorts. The clusters of adobe casitas, many with patio entrances, reflect the resort’s heritage as one of Santa Fe’s first tourist courts. La Posada caters to sophisticated travelers who appreciate the resort’s southwestern charm, extraordinary services, and romantic ambience.