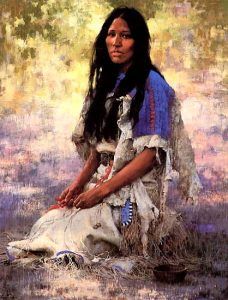 There once lived a Sioux couple who had two children, a boy, and a girl. Every fall this family would move away from the main camp and take up their winter quarters in a grove of timber some distance from the principal village. The reason they did this was that he was a great hunter and where a village was located for the winter the game was usually very scarce. Therefore, he always camped by himself in order to have an abundance of game adjacent to his camp.

All summer he had roamed around following the tribe to wherever their fancy might take them. During their travels this particular year there came to the village a strange girl who had no relatives there. No one seemed very anxious to take her into their family, so the great hunter’s daughter, taking a fancy to the poor girl, took her to their home and kept her. She addressed her as sister, and the parents, on account of their daughter, addressed her as daughter.

This strange girl became desperately in love with the young man of the family, but being addressed as daughter by the parents, she could not openly show her feelings as the young man was considered her brother.

In the fall when the main village moved into a large belt of timber for their winter quarters, the hunter moved on to another place two days’ travel from the main winter camp, where he would not be disturbed by any other hunters. 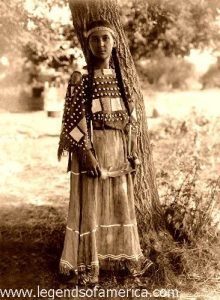 The young man had a tent by himself, and it was always kept nice and clean by his sister, who was very much attached to him. After a long day’s hunt in the woods, he would go into his tent and lie down to rest, and when his supper was ready his sister would say, “My brother is so tired. I will carry his supper to him.”

Her friend, whom she addressed as sister, would never go into the young man’s tent. Along towards spring there came one night into the young man’s tent a woman. She sat down by the door and kept her face covered so that it was hidden from view. She sat there a long time and finally arose and went away. The young man could not imagine who this could be. He knew that it was a long distance from the village and could not make out where the woman could have come from. The next night the woman came again and this time she came a little nearer to where the young man lay. She sat down and kept her face covered as before. Neither spoke a word. She sat there for a long time and then arose and departed. He was very much puzzled over the actions of this woman and decided to ascertain on her next visit who she was.

The third night the woman came again and sat down still nearer his bed. She held her blanket open just a trifle, and he, catching up one of the embers, flashed it in her face; jumping up she ran hurriedly out of the tent. The next morning he noticed that his adopted sister kept her face hidden in her blanket. She chanced to drop her blanket while in the act of pouring out some soup, and when she did so he noticed a large burned spot on her cheek.

He felt so sorry for what he had done that he could eat no breakfast, but went outside and lay down under an oak tree. All day long he lay there gazing up into the tree, and when he was called for supper he refused, saying that he was not hungry, and for them not to bother him, as he would soon get up and go to bed. Far into the night, he lay thus, and when he tried to arise he could not, as a small oak tree grew through the center of his body and held him fast to the ground.

In the morning when the family awoke they found the girl had disappeared, and ongoing outside the sister discovered her brother held fast to the earth by an oak tree which grew very rapidly. In vain were the best medicine men of the tribe sent for. Their medicine was of no avail. They said: “If the tree is cut down the young man will die.” 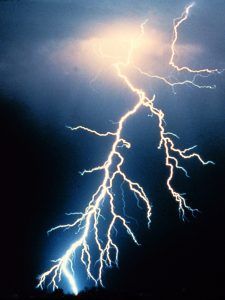 The sister was wild with grief, and extending her hands to the sun, she cried: “Great Spirit, relieve my suffering brother. Anyone who releases him I will marry, be he young, old, homely or deformed.”

Several days after the young man had met with the mishap, there came to the tent a very tall man, who had a bright light encircling his body. “Where is the girl who promised to marry anyone who would release her brother?” “I am the one,” said the young man’s sister. “I am the all-powerful lightning and thunder. I see all things and can kill at one stroke a whole tribe. When I make my voice heard the rocks shake loose and go rattling down the hillsides. The brave warriors cower shivering under some shelter at the sound of my voice. The girl whom you had adopted as your sister was a sorceress. She bewitched your brother because he would not let her make love to him. On my way here I met her traveling towards the west, and knowing what she had done, I struck her with one of my blazing swords, and she lies there now a heap of ashes. I will now release your brother.”

So saying he placed his hand on the tree and instantly it crumbled to ashes. The young man arose and thanked his deliverer.

Then they saw a great black cloud approaching, and the man said: “Make ready, we shall go home on that cloud.” As the cloud approached near to the man who stood with his bride, it suddenly lowered and enveloped them, and with a great roar and amidst flashes of lightning and loud peals of thunder the girl ascended and disappeared into the west with her Thunder and Lightning husband.

Myths and Legends of the Sioux was published by Marie L. McLaughlin in 1916 and is now in the public domain. McLaughlin, who was of ¼ Sioux blood and was born and reared in the Indian community, acquiring a thorough knowledge of the Sioux people and language at an early age. While living on an Indian reservation for more than forty years, she learned the legends and folklore of the Sioux.  These legends and myths were told in the lodges and at the campfires of the past, and then later by the firesides of the Dakota. McLaughlin kept careful notes of the many tales told to her by the Sioux elders until she published this book of legends in 1913.