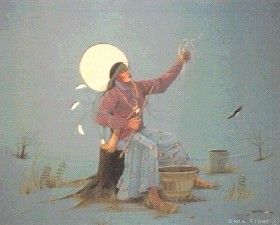 A village of Indians moved out of winter camp and pitched their tents in a circle on high land overlooking a lake. A little way down the declivity was a grave. Chokecherries had grown up, hiding the grave from view. But as the ground had sunk somewhat, the grave was marked by a slight hollow.

One of the villagers going out to hunt took a short cut through the chokecherry bushes. As he pushed them aside he saw the hollow grave but thought it was a washout made by the rains. But as he essayed to step over it, to his great surprise he stumbled and fell. Made curious by his mishap, he drew back and tried again; but again he fell. When he came back to the village he told the old men what had happened to him. They remembered then that a long time before there had been buried there a medicine woman or conjurer. Doubtless, it was her medicine that made him stumble.

The story of the villager’s adventure spread through the camp and made many curious to see the grave. Among others were six little boys who were, however, rather timid, for they were in great awe of the dead medicine woman. But they had a little playmate named Brave, a mischievous little rogue, whose hair was always unkempt and tossed about and who was never quiet for a moment.

“Let us ask Brave to go with us,” they said; and they went in a body to see him.

“All right,” said Brave; “I will go with you. But I have something to do first. You go on around the hill that way, and I will hasten around this way, and meet you a little later near the grave.”

So the six little boys went on as bidden until they came to a place near the grave. There they halted.

“Where is Brave?” they asked. 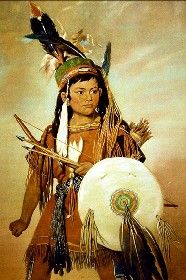 Now Brave, full of mischief, had thought to play a jest on his little friends. As soon as they were well out of sight he had sped around the hill to the shore of the lake and sticking his hands in the mud had rubbed it over his face, plastered it in his hair, and soiled his hands until he looked like a newly risen corpse with the flesh rotting from his bones. He then went and lay down in the grave and awaited the boys.

When the six little boys came they were more timid than ever when they did not find Brave; but they feared to go back to the village without seeing the grave, for fear the old men would call them cowards.

So they slowly approached the grave and one of them timidly called out:

“Please, grandmother, we won’t disturb your grave. We only want to see where you lie. Don’t be angry.”

At once a thin quavering voice, like an old woman’s, called out:

The boys were frightened out of their senses, believing the old woman had come to life.

Just then Brave raised his muddy face and hands up through the chokecherry bushes. With the oozy mud dripping from his features he looked like some very witch just raised from the grave. The boys screamed outright. One fainted. The rest ran yelling up the hill to the village, where each broke at once for his mother’s tepee.

As all the tents in a Dakota camping circle face the center, the boys as they came tearing into camp were in plain view from the tepees. Hearing the screaming, every woman in camp ran to her tepee door to see what had happened. Just then little Brave, as badly scared as the rest, came rushing in after them, his hair on end and covered with mud and crying out, all forgetful of his appearance:

The women yelped and bolted in terror from the village. Brave dashed into his mother’s tepee, scaring her out of her wits. Dropping pots and kettles, she tumbled out of the tent to run screaming with the rest. Nor would a single villager come near poor little Brave until he had gone down to the lake and washed himself.

About the Author: Myths and Legends of the Sioux was published by Marie L. McLaughlin in 1916. McLaughlin, who was of ¼ Sioux blood and was born and reared in the Indian community, acquiring a thorough knowledge of the Sioux people and language at an early age. While living on an Indian reservation for more than forty years, she learned the legends and folklore of the Sioux. These legends and myths were told in the lodges and at the campfires of the past, and then later by the firesides of the Dakota. McLaughlin kept careful notes of the many tales told to her by the Sioux elders until she published this book of legends in 1913.