By George Bird Grinnell in 1913 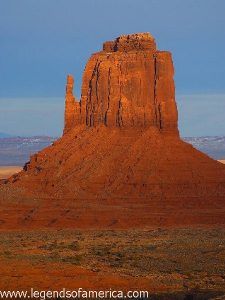 There was once a man who loved his wife dearly. After they had been married for a time, they had a little boy. Sometime after that, the woman grew sick and did not get well. She was sick for a long time. The young man loved his wife so much that he did not wish to take a second woman. The woman grew worse and worse. Doctoring did not seem to do her any good. At last, she died.

A few days after this, the man took his baby on his back and traveled out away from the camp, walking over the hills, crying and mourning. He felt bad, and he did not know what to do.

After a time, he said to the little child, “My little boy, you will have to go and live with your grandmother. I shall go away and try to find your mother and bring her back.”

He took the baby to his mother’s lodge, asked her to take care of it, and left it with her. Then he started away, not knowing where he was going nor what he should do.

When he left the camp, he traveled toward the Sand Hills. On the fourth night of his journeying, he had a dream. He dreamed that he went into a little lodge in which was an old woman. This old woman said to him, “Why are you here, my son?”

The young man replied, “I am mourning day and night, crying all the while. My little son, who is the only one left me, also mourns.”

“Well,” asked the old woman, “for whom are you mourning?”

The young man answered, “I am mourning for my wife. She died some time ago. I am looking for her.”

“Oh, I saw her,” said the old woman; “she passed this way. I myself have no great power to help you, but over by that far butte beyond lives another old woman. Go to her, and she will give you the power to continue your journey. You could not reach the place you are seeking without help. Beyond the next butte from her lodge, you will find the camp of the ghosts.” 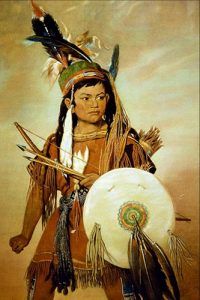 The next morning the young man awoke and went on toward the next butte. It took him a long summer’s day to get there, but he found there no lodge, so he lay down and slept. Again he dreamed. He saw a little lodge in his dream and saw an old woman come to the door and heard her call to him. He went into the lodge, and she spoke to him.

“My son, you are very unhappy. I know why you have come this way.  You are looking for your wife, who is now in the ghost country. It is a very hard thing for you to get there. You may not be able to get your wife back, but I have great power, and I will do for you all that I can. If you act as I advise, you may succeed.”

Otherwise, she spoke to him, telling him what he should do; also, she gave him a bundle of mysterious things that would help him on his journey.

She went on to say, “You stay here for a time, and I will go over there to the ghosts’ camp and try to bring back some of your relations who are there. If it is possible for me to bring them back, you may return there with them, but on the way, you must shut your eyes. If you should open them and look about you, you would die.

Then you would never come back. When you come to the camp, you will pass by a big lodge, and they will ask you, ‘Where are you going and who told you to come here?’ You must answer, ‘My grandmother, who is standing out here with me, told me to come.’ They will try to scare you; they will make fearful noises, and you will see strange and terrible things, but do not be afraid.”

The old woman went away, and after a time, came back with one of the man’s relations. He went with this relation to the ghosts’ camp. When they came to the large lodge, someone called out and asked the man what he was doing there, and he answered as the old woman had told him. As he passed on through the camp, the ghosts tried to frighten him with many fearful sights and sounds, but he kept up a strong heart.

Presently he came to another lodge, and the man who owned it came out and spoke to him, asking where he was going. The young man said, “I am looking for my dead wife. I mourn for her so much that I cannot rest. My little boy keeps crying for his mother. They have offered to give me other wives, but I do not want them. I want the one for whom I am searching.”

The ghost said, “It is a fearful thing that you have come here; it is very likely that you will never go away. Never before has there been a person here.”

The ghost asked him to come into his lodge, and he entered.

This chief ghost said to him, “You shall stay here for four nights, and you shall see your wife, but you must be very careful, or you will never go back. You will die here in this very place.”

Then the chief ghost walked out of the lodge and shouted out for a feast, inviting the man’s father-in-law and other relations who were in the camp to come and eat, saying, “Your son-in-law invites you to a feast,” as if he meant that the son-in-law had died and become a ghost and arrived at the camp of the ghosts.

Now when these invited ghosts had reached the lodge, they did not like to go in. They said to each other, “There is a person here”; it seemed as if they did not like the smell of a human being. So the chief ghost burned sweet pine on the fire, which took away this smell, and then the ghosts came in and sat down. 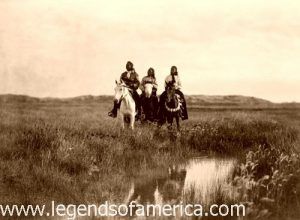 The chief ghost said to them, “Now pity this son-in-law of yours. He is looking for his wife. Neither the great distance that he has come nor the fearful sights that he has seen here have weakened his heart. You can see how tender-hearted he is. He not only mourns because he has lost his wife, but he mourns because his little boy is now alone, with no mother; so pity him and give him back his wife.”

The ghosts talked among themselves, and one of them said to the man, “Yes; you shall stay here for four nights, and then we will give you a medicine pipe–the Worm Pipe–, and we will give you back your wife, and you may return to your home.”

Now, after the third night, the chief ghost called together all the people, and they came, and with them came the man’s wife. One of the ghosts was beating a drum, and following him was another who carried the Worm Pipe, which they gave to him.

Then the chief ghost said, “Now be very careful; tomorrow, you and your wife will start on your journey homeward. Your wife will carry the medicine pipe, and for four days, some of your relations will go along with you. During this time, you must keep your eyes shut; do not open them, or you will return here and be a ghost forever. Your wife is not now a person. But in the middle of the fourth day, you will be told to look, and when you have opened your eyes, you will see that your wife has become a person and that your ghost relations have disappeared.”

Before the man went away, his father-in-law spoke to him and said, “When you get near the home, you must not go at once into the camp. Let some of your relations know that you have come, and ask them to build a sweat-house for you. Go into that sweat-house and wash your body thoroughly, leaving no part of it, however small, uncleansed. If you fail in this, you will die. There is something about ghosts that is difficult to remove. It can only be removed by a thorough sweat. Take care now that you do what I tell you. Do not whip your wife, nor strike her with a knife, nor hit her with fire. If you do, she will vanish before your eyes and return here.”

They left the ghost country to go home, and on the fourth day, the wife said to her husband, “Open your eyes.” He looked about him and saw that those who had been with them had disappeared, and he found that they were standing in front of the old woman’s lodge by the butte. She came out of her lodge and said to them, “Stop; give me back those mysterious medicines of mine, whose power helped you to do what you wished.” The man returned them to her, and then once more became really a living person.

When they drew near to the camp, the woman went on ahead and sat down on a butte. Then some curious persons came out to see who this might be. As they approached, the woman called out to them, “Do not come any nearer. Go and tell my mother and my relations to put up a lodge for us a little way from the camp, and nearby it build a sweat-house.” When this had been done, the man and his wife went in and took a thorough sweat, and then they went into the lodge and burned sweet grass and purified their clothing and the Worm Pipe.  Then their relations and friends came in to see them. The man told them where he had been and how he had managed to get his wife back and that the pipe hanging over the doorway was a medicine pipe–the Worm Pipe–presented to him by his ghost father-in-law.

That is how the people came to possess the Worm Pipe. That pipe belongs to the band of Piegans known as the Worm People.

Not long after this, once in the night, this man told his wife to do something, and when she did not begin at once, he picked up a brand from the fire and raised it–not that he intended to strike her with it, but he made as if he would–when all at once she vanished and was never seen again. 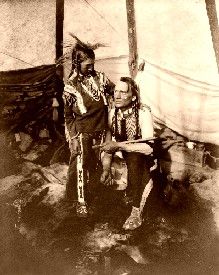 The legend of the peace pipe

About the Author: Blackfoot Indians Stories was published by George Bird Grinnell in 1913. The text as it appears here, however, is not verbatim as it has been edited for clarity and ease of the modern reader. George Bird Grinnell studied at Yale with an intense desire to be a naturalist. He talked his way onto a fossil collecting expedition in 1870 and then served as the naturalist on Custer’s expedition to the Black Hills in 1874. Grinnell was interested in what he could learn from the Indian tribes of the region, and early on, was well known for his ability to get along with Indian elders. The Pawnee called him White Wolf and eventually adopted him into the tribe. Grinnell was also editor of Forest and Stream, the leading natural history magazine in North America, the founder of the Audubon Society and the Boone and Crockett Club, and an advisor to Theodore Roosevelt. Glacier National Park came about largely through his efforts. Grinnell also spent significant time working for fair and reasonable treaties with Native American tribes and preserving America’s wildlands and resources.