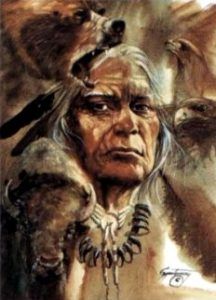 The Blackfoot believe that the Sun made the earth–that he is the creator. One of the names by which they call the Sun is Napi—Old Man. This is how they tell of the creation:

In the beginning, there was water everywhere; nothing else was to be seen. There was something floating on the water, and on this raft were Old Man and all the animals.

Old Man wished to make land, and he told the beaver to dive down to the bottom of the water and to try to bring up a little mud. The beaver dived and was under water for a long time, but he could not reach the bottom. Then the loon tried, and after him the otter, but the water was too deep for them. At last the muskrat was sent down, and he was gone for a long time; so long that they thought he must be drowned, but at last he came up and floated almost dead on the water, and when they pulled him up on the raft and looked at his paws, they found a little mud in them.

When Old Man had dried this mud, he scattered it over the water and land was formed. This is the story told by the Blackfoot. It is very much like one told by some Eastern Indians, who are related to the Blackfoot.

After the land had been made, Old Man traveled about on it, making things and fixing up the earth so as to suit him. First, he marked out places where he wished the rivers to run, sometimes making them run smoothly, and again, in some places, putting falls on them. He made the mountains and the prairie, the timber and the small trees and bushes, and sometimes he carried along with him a lot of rocks, from which he built some of the mountains–as the Sweet Grass Hills–which stand out on the prairie by themselves.

Old Man caused the grass to grow on the plains so that the animals might have something to feed on. He marked off certain pieces of land, where he caused different kinds of roots and berries to grow–a place for camas; and one for wild carrots; one for wild turnips, sweet root and bitter root; one for serviceberries, bullberries, cherries, plums, and rosebuds.

He made all kinds of animals that travel on the ground. When he made the big-horn with its great horns, he put it out on the prairie. It did not seem to travel easily there; it was awkward and could not go fast, so he took it by one of its horns and led it up into the rough hills and among the rocks, and let it go there, and it skipped about among the cliffs and easily went up fearful places. So Old Man said to the big-horn, “This is the place for you; this is what you are fitted for; the rough country and the mountains.” While he was in the mountains he made the antelope and turned it loose to see how it traveled. The antelope ran so fast that it fell over some rocks and hurt itself. He saw that this would not do, and took the antelope down on the prairie and set it free there, and it ran away fast and gracefully, and he said to it, “This is the place that suits you.”

At last, one day, Old Man decided that he would make a woman and a child, and he modeled some clay in human shape, and after he had made these shapes and put them on the ground, he said to the clay, “You shall be people.” He spread his robe over the clay figures and went away. The next morning he went back to the place and lifted up the robe, and saw that the clay shapes had changed a little. When he looked at them the next morning, they had changed still more; and when on the fourth day he went to the place and took off the covering, he said to the images, “Stand up and walk,” and they did so. They walked down to the river with him who had made them, and he told them his name.

As they were standing there looking at the water as it flowed by, the woman asked Old Man, saying, “How is it; shall we live always? Will there be no end to us?”

Old Man said, “I have not thought of that. We must decide it. I will take this buffalo chip and throw it in the river. If it floats, people will become alive again four days after they have died; they will die for four days only. But if it sinks, there will be an end to them.” He threw the chip into the river, and it floated.

The woman turned and picked up a stone and said, “No, I will throw this stone in the river. If it floats, we shall live always; if it sinks, people must die, so that their friends who are left alive may always remember them.” The woman threw the stone in the water, and it sank.

“Well,” said Old Man, “you have chosen; there will be an end to them.”

Not many nights after that the woman’s child died, and she cried a great deal for it. She said to Old Man, “Let us change this. The law that you first made, let that be the law.”

He said, “Not so; what is made law must be law. We will undo nothing that we have done. The child is dead, but it cannot be changed. People will have to die.”

These first people did not have hands like a person; they had hands like a bear with long claws. They were poor and naked and did not know how to get a living. Old Man showed them the roots and the berries, and showed them how to gather these, and told them how at certain times of the year they should peel the bark off some trees and eat it; that the little animals that live in the ground–rats, squirrels, skunks, and beavers–were good to eat. He also taught them something about the roots that were good for medicine to cure sickness. 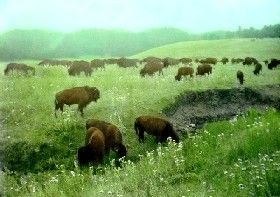 In those days there were buffalo, and these black animals were armed, for they had longhorns. Once, as the people were moving about, the buffalo saw them and rushed upon them and hooked them and killed them, and then ate them. One day, as the creator was traveling about, he came upon some of his children that he had made lying there dead, torn to pieces and partly eaten by the buffalo. When he saw this, he felt bad. He said, “I have not made these people right. I will change this; from now on the people shall eat the buffalo.”

He went to some of the people who were still alive, and said to them, “How is it that you people do nothing to these animals that are killing you?” The people replied, “What can we do? These animals are armed and can kill us, and we have no way to kill them.”