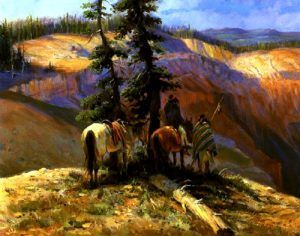 In the beginning, the world was covered with darkness. There was no sun, no day. The perpetual night had no moon or stars.

There were, however, all manner of beasts and birds. Among the beasts were many hideous, nameless monsters, as well as dragons, lions, tigers, wolves, foxes, beavers, rabbits, squirrels, rats, mice, and all manner of creeping things such as lizards and serpents. Mankind could not prosper under such conditions, for the beasts and serpents destroyed all human offspring.

All creatures had the power of speech and were gifted with reason.

There were two tribes of creatures: the birds or the feathered tribe and the beasts. The former were organized wider their chief, the eagle.

These tribes often held councils, and the birds wanted light admitted. This the beasts repeatedly refused to do. Finally, the birds made war against the beasts.

The beasts were armed with clubs, but the eagle had taught his tribe to use bows and arrows. The serpents were so wise that they could not all be killed. One took refuge in a perpendicular cliff of a mountain in Arizona, and his eyes that changed into a brilliant stone may be see in that rock to this day. The bears, when killed, would each be changed into several other bears, so that the more bears the feathered tribe killed, the more there were. The dragon could not be killed, either, for he was covered with four coats of horny scales, and the arrows would not penetrate these. One of the most hideous, vile monsters was proof against arrows, so the eagle flew high up in the air with a round, white stone, and let it fall on this monster’s head, killing him instantly. This was such a good service that the stone was called sacred. They fought for many days, but at last the birds won the victory.

After this war was over, although some evil beasts remained, the birds were able to control the councils, and the light was admitted, Then mankind could live and prosper. The eagle was chief in this good fight: therefore, his feathers were worn by man as emblems of wisdom, justice, and power.

Among the few human beings that were yet alive was a woman who had been blessed with many children, but these had always been destroyed by the beasts. If by any means she succeeded in eluding the others, the dragon, who was very wise and very evil, would come himself and eat her babes. 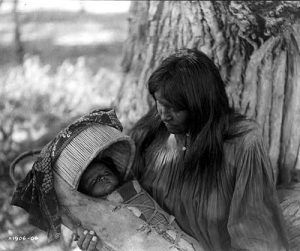 After many years a son of the rainstorm was born to her and she dug for him a deep cave. The entrance to this cave she closed and over the spot built a campfire. This concealed the babe’s hiding place and kept him warm. Every day she would remove the fire and descend into the cave, where the child’s bed was, to nurse him; then she would return and rebuild the campfire.

Frequently the dragon would come and question her, but she would say “I have no more children; you have eaten all of them.”

When the child was larger he would not always stay in the cave, for he sometimes wanted to run and play. Once the dragon saw his tracks. Now this perplexed and enraged the old dragon, for he could not find the hiding place of the boy; but he said that he would destroy the mother if she did not reveal the child’s hiding place.

His poor mother was very much troubled; she could not give up her child, but she knew the power and cunning of the dragon, therefore she lived in constant fear. 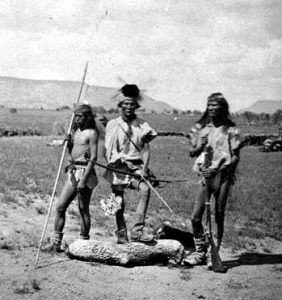 Soon after this, the boy said that he wished to go hunting. The mother would not give her consent. She told him of the dragon, the wolves, and serpents; but he said “Tomorrow I go.”

At the boy’s request his uncle, who was the only man then living, made a little bow and some arrows for him, and the two went hunting the next day. They trailed the deer far up the mountain and finally, the boy killed a buck. His uncle showed him how to dress the deer and broil the meat.

They broiled two hindquarters, one the child and one for his uncle. When the meat was done they placed it on some bushes to cool. Just then the huge form of the dragon appeared. The child was not afraid, but his uncle was so dumb with fright that he did not speak or move.

The dragon took the boy’s parcel of meat and went aside with it. He placed the meat on another bush and seated himself beside it. Then he said:

“This is the child I have been seeking. Boy, you are nice and fat, so when I have eaten this venison I shall eat you.” The boy said, “No, you shall not eat me, and you shall not eat that meat.” So he walked over to where the dragon sat and to where the meat back to his own seat. The dragon said, “I like your courage, but you are foolish; what do you think you could do?” Well, said the boy, “I can do enough to protect myself, as you may bind out.” Then the dragon took the meat again, and then the boy retook it. Four times in all the dragon took the meat, and after the fourth time the boy replaced the meat he said, “Dragon, will you fight me?” The dragon said, “Yes, in whatever way you like.” The boy said, I will stand one hundred paces distant from you and you may have four shots at me with your bow and arrows, provided that you will then exchange places with me and give me four shots. Good, said the dragon. Stand up.”

Then the dragon took his bow, which was made of a large pine tree. He took four arrows from his quiver; they were made of young pine tree saplings, and each arrow was twenty feet in length. He took deliberate aim, but just as the arrow left the bow the boy made a peculiar sound and leaped into the air. Immediately the arrow was shivered into a thousand splinters, and the boy was seen standing on the top of a bright rainbow over the spot where the dragon’s aim had been directed. Soon the rainbow was gone and the boy was standing on the ground again. Four times this was repeated, then the boy said, “Dragon, stand here: it is my time to shoot.” The dragon said, “All right, your little arrows cannot pierce my first coat of horn, and I have three other coats –shoot away.” The boy shot an arrow, striking the dragon just over the heart, and one coat of the great horny scales fell to the ground. The next shot another coat, and then another, and the dragon’s heart was exposed. Then the dragon trembled, but could not move. Before the fourth arrow was shot the boy said, “Uncle, you are dumb with fear; you have not moved; come here or the dragon will fall on you.” His uncle ran toward him. Then he sped the fourth arrow with true aim, and it pierced the dragon’s heart. With a tremendous roar, the dragon rolled down the mountainside — down four precipices into a canon below. 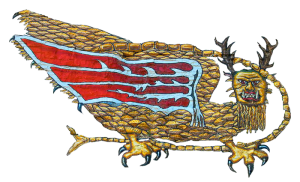 Immediately storm clouds swept the mountains, lightning flashed, thunder rolled, and the rain poured. When the rainstorm had passed, far down in the canon below, they could see fragments of the huge body of the dragon lying among the rocks, and the bones of this dragon may still be found there.

This boy’s name was Apache. Usen taught him how to prepare herbs for medicine, how to hunt, and how to fight. He was the first chief of the Indians and wore the eagle’s feathers the sign of justice, wisdom, and power. To him and to his people, as they were created, Usen gave homes in the land of the West.

Excerpted from Geronimo: His Own Story as told by Geronimo to S. M. Barrett in 1905.  Original book published in 1906, now in the public domain.

Killing Of The Monsters