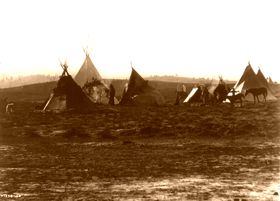 Naiyenesgani [a Jicarilla Creator God] came where Elk had been killing people. He could not get near it although he tried to approach it from every side. Then another person came to him to be his partner. “My companion,” he said, “I will gnaw off the hair on his breast for you.” Having done this he returned, saying, “Now go to him.”

He went into the bottom tunnel; just as Elk broke this out he fell down dead. The partner then came up to him and said, “The breast will be mine.” Naiyenesgani skinned it and took the hide. He also chopped off one of the horns. He filled two of the blood vessels with blood and spread out the hide in the sun until it was dry.

He started away toward the eagle. When he came to him he wrapped the elk hide about himself and went out into an open place. The eagle, when he swooped down, attempted to drive his talons into him but could not penetrate the hide. He flew up without getting hold of him. He came to him again but failed to get his talons in. He flew up again. He came back and having failed, flew away again. Then he came back and drove in his talons. He flew away to his home with the man. He brought him to his young. When they bent their heads down over him he said, “Sst.” “Father, when we put our heads down to it, it says ‘sst,'” one of them said. “Do not mind it; go ahead and eat. It is the air coming out of the wound that makes that noise.” Then the blood flowed through the opening. The old eagle flew away.

Naiyenesgani came up to them holding the horn in his hand. “When your father comes home, on what rock does he sit?” he asked. “He sits on yonder point of rock,” one of them told him. Naiyenesgani sat there with eagle’s children until the father came again bringing with him a pretty dead girl which he threw down. Making motions four times, Naiyenesgani struck him and he fell into the canyon. He heard him burst as he struck. “When your mother comes back, where does she sit?” he asked. “She sit, here,” one of them said. The mother came back. Naiyenesgani making motions four times, struck her, throwing her into the canyon. Then he said to the young eagles, “You will be just as large as you are now. People will like your feathers.” “Those who take them will have their muscles draw up.” “You shall not talk,” he said. Then they ceased talking.

In the distance, his grandmother (bat) was coming into the open from the timber. She walked along carrying a basket. Then he shouted to her, “Grandmother, take me down,” but she did not hear. He shouted to her again and then she heard. Then his grandmother came near him. “I shouted to you, ‘take me down, grandmother,'” he said. “Come up to me and take me down,” he told her. Then she climbed up to him, carrying her basket. “Grandmother, this carrying rope on your basket is very small.” “Why, grandson, I carry very heavy things with this. Fill it with stones and see if it breaks.” When he had filled it she jumped with it. Then she took the stones out again and he got in. “Shut your grandson.”

She started to go down with him. “Do not open your eyes, eyes, grandson,” she cautioned him, the rock is sheer. We are falling, grandson, do not open your eyes. We are down.” When they were at the foot of the cliff, Naiyenesgani said, “Grandmother, I have killed something, let us go to it.” When they came there he said, “Now, grandmother, I will give you some good property. Put down your basket here.” He then filled it with feathers. “Now, you may carry it away but do not go along the hillside, go along the top of the hills,” he told her. She carried it away along the hillside, and the birds came and took away the feathers. She came back to him and he filled her basket again. “Do not carry the basket on the hillside,” he told her.

Again, she carried it along the side of the hill and the birds came and took away all the feathers. She came back to him again and he filled the basket for her. “‘Do not carry it along the sloping places,’ I told you,” he said. Then they took the feathers away front her. When she came back to him this time he said, “You do not want to possess this good property which I have been giving you. For that reason, your feathers will be poor. You will live in the clefts of the rocks and will use bark for your house. Your garments will be poor. You do not want things that are good. You will not have a shirt.”

He went again where there was something bad. When he came among the people there they said to him, “If you have supernatural power, take out our people from the marsh where they have sunk.” “Very well,” he said, “I will take them out for you.” When he came to the place he stood first at the east, then at the south, then at the west, and finally at the north. Then the water disappeared of itself and he went to the entrance and went in. “I have come for the people you have taken away,” he said, “bring them to me. Do not bring me just one.” “There are no people,” replied the monster. “Just bring them to me, do not talk.” Then he brought them to him. “Just one sits there,” he said. “I did not come for one,” he told him. Then he sent one out to him. “Are there many people where you are staying?” he asked. “There are many people there,” he said. “Bring them all out,” Naiyenesgani called. The people all began to crowd outside. Then they went up to the surface of the ground. “You may just stay in the marsh,” he said to the monster. When all the people had come out he spoke to him [the monster,] “You must not do it any time. Just soft mud does not talk. It must not speak words.” Then he went out away from him and came where the people were.

Naiyenesgani was sitting there. “I just speak to you,” he said, “select for me four pretty girls. I wish to go with them.” Then he went away with them toward the west. At Kagodjae he left one; at Tsosbai, another; and at Becdelkai, the third. With the other one, he went to the west where they remain forever.

About the Author: Pliny Earle Goddard (1869-1928) was an ethnologist and linguist of American Indian languages. After college graduation he worked in a religious organization helping with a number of impoverished schools and eventually took a position as a missionary with the Women’s Indian Aid Association. Deciding to make ethnology his life’s work, he continued his studies, earning a Ph.D. in linguistics. During his lifetime, he published a number of books and journals including several volumes entitled the Anthropological Papers of the American Museum of Natural History. This tale comes from his Jicarilla Apache texts, from Volume VIII of that series, published in 1911.