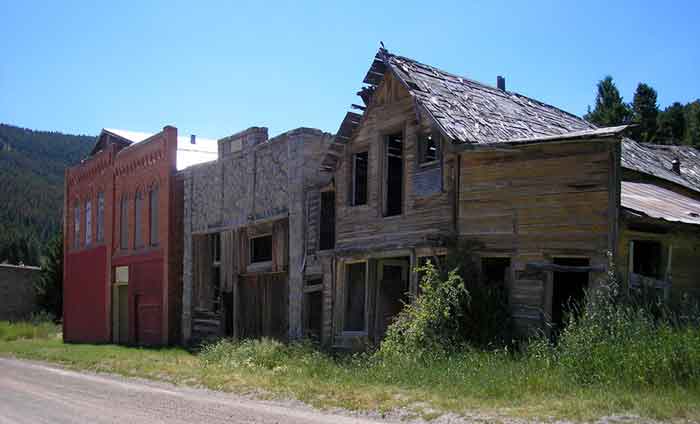 Marysville Montana 2008, from left to right, the Marysville Masonic Lodge, built in 1898, the J.A. Shaffer Mercantile, built in 1895, and the Lush Confectionary Store. Kathy Weiser-Alexander. Click for prints and products.

Sitting just four miles below the Continental Divide and some 25 miles northwest of Helena, Montana is the once-thriving mining camp of Marysville. The settlement got its start when Irishman Tommy Cruse discovered a rich vein of gold on Silver Creek in 1876. A placer miner who had been working downstream, Tommy continued upstream hoping to find the mother lode, and lo and behold, was the lucky man to find it.

Dead broke, Cruse had to borrow money to work his claim, but eventually developed the Drumlummon Mine. Almost immediately he recovered more than $140,000 in ore from the mine.

Within a short time of Cruse’s find, word spread of the rich gold vein, and miners began to flood the area. 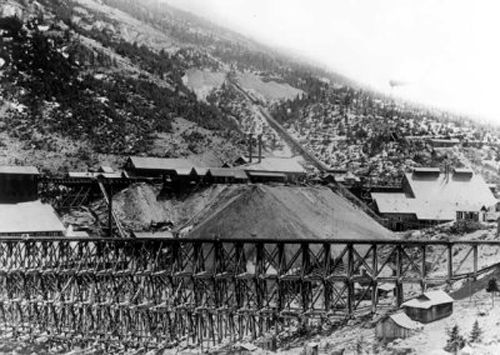 Historic Marysville Train Trestle and Mine.

Cruse named the new mining camp Marysville for its first female resident, Mary Ralston. The mine itself was named for the parish in Ireland, where Cruse was born. In 1880, Cruse built a five-stamp mill near the Drumlummon Mine. The following year, the Marysville Post Office was opened in February 1881 and by that time the small settlement was flourishing with numerous businesses.

In 1884, Cruse sold the Drumlummon Mine to an English Corporation for one million dollars in cash and another ½ million in stock. He then moved to Helena where he built a mansion, started a couple of banks and at the age of 50, married a young woman. However, just a year later, his new bride died in childbirth and Cruse became restless. He soon returned to the Marysville area and bought the Bald Mountain Mine on Bald Butte above town, which over the years, produced hundreds of thousands of dollars in gold, silver, copper and lead ore. 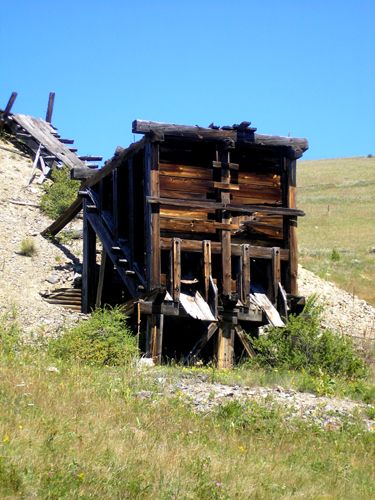 Old mining remnants and cabins dot the hillsides in and around Marysville. July 2008, Kathy Weiser-Alexander

Within two years of the sale of the Drumlummon Mine, the English company built 110 stamp mills to process the ore. During the 1880s and 1890s, Marysville boomed, with not only the Drumlummon Mine but also 12 additional mines in the area. The town soon boasted some 60 businesses, including 27 saloons, 7 hotels, three newspapers, grocery and drug stores, a bank, a dry-goods store, a bakery, three churches, two doctors, and numerous other businesses. At that time, the mining camp was serviced by two railroads, mining operations operated 24 hours a day, and the area sported as many as 4,000 people. A school was later built that accommodated over 250 children.

Marysville was also a very social community during its heydays, with numerous local activities including ice cream socials, garden parties, concerts by the Marysville Brass Band, and drilling contests, whereby the miners would compete to see who could work the drill into huge boulders of hard rock the fastest. Miners around the world competed in these contests, vying for World’s Drilling Record. One such event in the Marysville area was said to have drawn over a thousand spectators.

Unfortunately, at the turn of the century, the rich ores were becoming depleted, the mine was involved in a lawsuit with the nearby St. Louis Mining Company over boundary rights, production slowed and people began to move from Marysville.

To make matters worse, the town suffered a devastating fire in 1909 which destroyed several of its buildings. However, the town persevered and rebuilt. 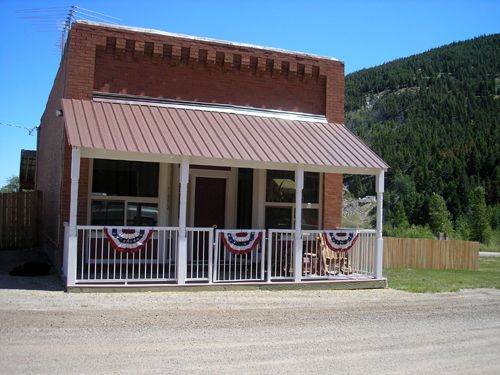 This building was constructed after the fire of 1909 and originally served as Nels Lund Saloon. During the 1940’s it operated as a grocery store. Click for prints & products

In the meantime, the lawsuit was finally settled, and the Drumlummon Mine was bought out by the St. Louis Mining company in 1911 and though it continued to be worked until 1948, Marysville was dying.

By the 1950’s many of the homes were moved to other areas, while others stood silent and abandoned to the elements, which over the last half-century, nature has taken its toll.

Today, Marysville is a sidewalk of history, with numerous old buildings dotting the landscape, as well as its historic (though unkempt) cemetery. The old graveyard has but just a few headstones left that are visible but includes several graves of a mining disaster that occurred at the nearby Belmont Mine in 1891.

In town, several buildings remain including the 1895 J.A. Shaffer Mercantile, the Masonic Lodge, Nels Lund Saloon, the 1886 Methodist Church, the schoolhouse, and lots more. The hillsides are dotted with cabins and mining remains. 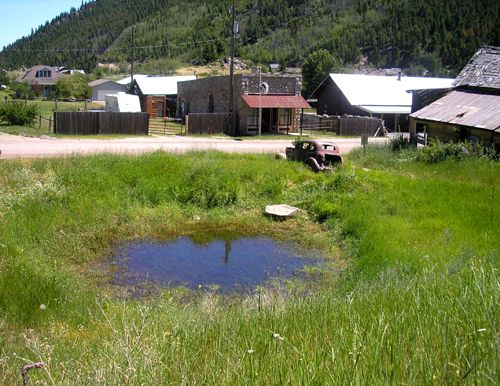 Marysville, Montana – Looking down on Main street from a hill on the west. The pond is where the old railroad turntable was located. Kathy Weiser-Alexander, July 2008.

But changes have been coming to Marysville in the last several years, as it has slowly progressed into a bedroom community of Helena, as well as a summer destination for many who have rehabilitated existing old buildings and built brand new homes.

Marysville was due for more change, as the high price of gold in the late 2000s saw the Drumlummon Mine re-opened, however in the summer of 2013 after the price dropped from its peak, the mine stopped operations.

Though Marysville has slowly moved on into the 21st century, its old legends and tales persist. According to the lore of this old mining camp, there are numerous strange events that take place in the area. Locals say that Marysville and the surrounding area is haunted by a number of unearthly spirits which include some ghastly tales.

Near Marysville, an unexplainable hunter, who is riding a bicycle and appears to be severely mangled, has been sighted pulling a dead wolf. Nearby, a headless woman has been spotted on the summit of Bald Butte. Another, not so welcome guest, has been spied in American Gulch. This gentleman is said to be an old miner with a big mustache and a hook right hand. Another probable miner, who also appears headless, has been seen near 1 Spring. 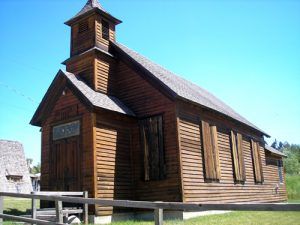 Built in 1886 the Methodist Church was utilized for services until 1939. Today it has been fully restored by its owners. Click for prints & products.

Ghosts or no ghosts, the community of Marysville is a wonderful stop for ghost town enthusiasts.

To get to Marysville from Helena, travel north on I-15 for about 9 miles, then turn left (west) at exit 200 onto Lincoln road/CR-279/CR-453 for about 10 miles, then left again at Marysville Road for about 6 miles.

Be sure to read “Off the Grid – Our Friend Albert“, about Albert Hall who lives nearby.