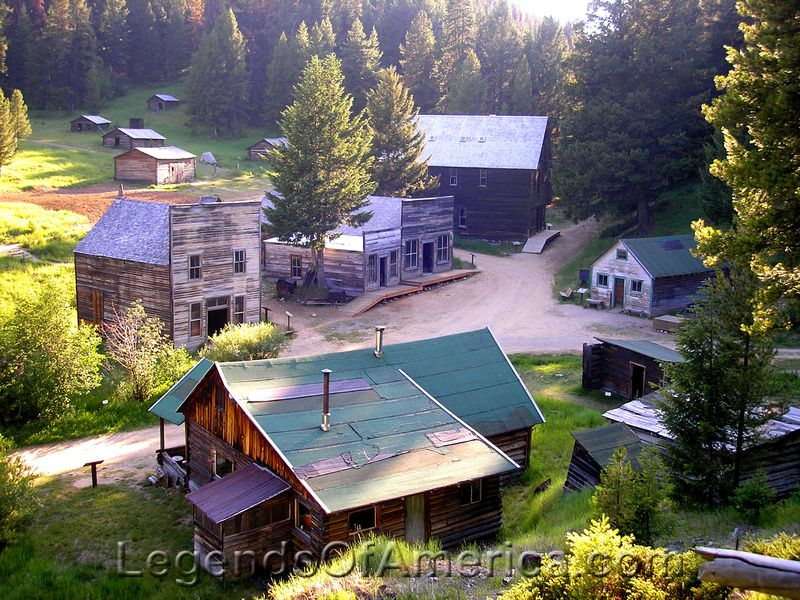 Town view of Garnet in 2008. Photo by Kathy Weiser-Alexander.

Exploring ghost towns is a fun, entertaining way to relive aspects of the American West. Some ghost towns in the American West such as Oatman, Arizona are not only inhabited but make the most of their opportunity to capitalize on their town’s former glory. In other cases, ghost towns truly are empty and totally uninhabited, aside from archaeologists and occasional tourists passing through. Such is the case high in the hills of west-central Montana, where the historic ghost town of Garnet is located.

If you’ve been to any of Montana’s other well-known ghost towns like Virginia City or Bannack, you’ll find Garnet just as intriguing if not even more so.

It is situated in a remote valley located at the head of First Chance Creek, 6,000 feet up in the green pine-forested mountains east of Missoula. Garnet has an isolated feel to it and is not heavily touristed or commercialized. As you might expect (especially when you see it), Garnet has a reputation of being a haunted ghost town.

Garnet dates back to the turn of the 20th century. It was named for the semi-precious garnet rock first mined there before gold was found. Like most mining towns, Garnet wasn’t built to last, yet over a century later, buildings lacking foundations still stand. 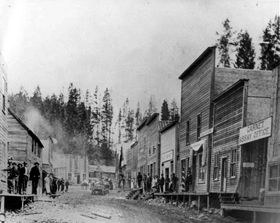 Placer mining was practiced around the area later to be established as Garnet in the 1860s, and gold was found at the First Chance Gulch in 1865. Miners worked about 50 mines in the vicinity. Garnet dates back to 1895, but it wasn’t until an abundant strike at the Nancy Hanks Mine that the town began to boom. In 1896, the Nancy Hanks Mine produced $690,000, and the boom continued throughout the 1890s as mining companies rolled into Garnet.

Based on the wealth it was producing, you can get a good idea of what life there must have been like when Garnet was thriving. Garnet had four hotels, four stores, two barbershops, a butcher shop, a doctor’s office, laundry facilities, and thirteen saloons.

Despite its remote location, there was a school and unlike other mining towns, many families resided in Garnet. Stagecoach transportation ran daily between Bearmouth and Coloma and supplies were available in Missoula and Deer Lodge, just a three-day’s journey from Garnet. The population of Garnet grew and it was much more of a community than typical mining towns. The population swelled to as many as 1,200 in its prime.

Residents of Garnet did more than just mine for garnets and gold and support the efforts of miners. There were dances and parties, picnics and fishing trips, and a genuine social life for its residents. Saloons and the drinking, gambling, and prostitution that typified many mining camp towns were present but controlled to a great degree. The jail was available as an incentive to keep rowdy drunkenness at a minimum, or at least a tolerable level. 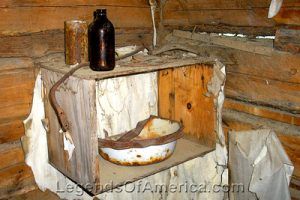 A view of the interior of an old home in Garnet, Montana. Photo by Kathy Weiser-Alexander

Twenty years after it was established, the gold in Garnet ran out. AS few as 150 people remained in Garnet and most of the mines were abandoned by 1905. A fire raged through the town in 1912, destroying many commercial establishments. Garnet was never rebuilt, and employment opportunities presented by World War I lured remaining residents away.

Garnet did experience a revival of sorts in 1934 following the rise in gold prices instituted by President Roosevelt. When gold skyrocketed from $16 to $32, miners moved back into Garnet’s abandoned buildings, and once again, mines were worked. Just as World War I had stripped Garnet of the remnants of its first population, World War II did the town in once again. Mining became more challenging as dynamite use was restricted and Garnet was abandoned once and for all by 1940.

Over the years after it was abandoned, Garnet was looted of its remaining furnishings and preservation efforts began in 1970. Today Garnet is managed by the Bureau of Land Management and the not-for-profit citizen’s group, the Garnet Preservation Association. 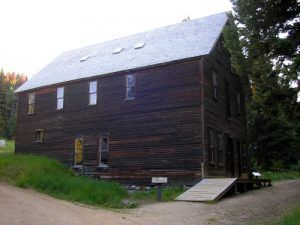 Today thirty buildings remain, including a log and frame cabin, a store, a saloon, and the remains of the J. K. Wells Hotel. There are also several miners’ cabins still standing. A Visitor’s Center is located on-site featuring books and gift items and interpretive signs and self-guided trails explain the historic site.

You can visit Garnet year-round, although the road is closed to wheeled vehicles and accessible mainly by snowmobiles or cross-country skis from January 1st through April 30th. You can rent cabins in Garnet or hire a guided tour in the summer months.

If you’d like to ghost-hunt in Garnet, one of the most popularly cited haunted buildings is Kelly’s Saloon. Sounds of music and laughter are reportedly heard there even in the dead of winter when only one individual is overseeing the town.

Caretakers also report hearing unexplained footsteps in the old Wells hotel, as well as doors shutting even in places where no doors are present. Whether it’s the Saloon or the hotel, those who’ve experienced the unexplained phenomena confirm that as soon as you approach the building, the noises immediately stop.

Whether you see or hear any spirits on your visit to Garnet, your experience will be memorable. It is eerie and impressive to step back in time in a place distinctly lacking the heavy commercialization and tourist trappings typical of other ghost towns and historic sites. A tour of Garnet is a one-of-a-kind adventure.

About the Author: Valerie Mellema is a freelance writer living in Amarillo, Texas. She loves to travel and is always planning a trip, whether it be a weekend in Dallas, a week in Spain, or a relaxing cruise. Her writing business, Words You Want, provides a variety of writing services including article writing, eBook writing, and other writing services on a wide variety of topics. She also has the opportunity to write for a variety of different websites and clients, such as HotelsCombined.com.