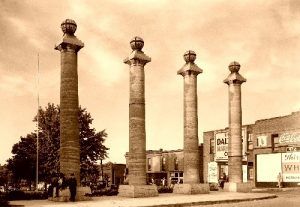 Columbia, Missouri, located in Boone County, was an area of intense conflict during the Civil War. At this time, the entire state was caught in the middle of the warring factions. Surrounded by two Confederate States and two Union States, Missouri had declared itself with the Union; however, while most urban centers were pro-Union, its rural residents favored Confederate sympathies.

Caught within its internal war, neighbors were pitted against neighbors. People who had once had goodwill for each other became enemies. Almost 300 men died in the Centralia Massacre, and more died at a battle of Mt. Zion Church north of Columbia. With Boone County’s history of conflict, it is not surprising that there are so many lingering spirits in the area.

Columbia College – When this college was initially founded in 1851, it was an all-female school called Christian College. One young student was engaged to a Confederate soldier and vowed to wear only grey clothing so long as he did, at least, until a white wedding gown could replace it. However, her fiancé was killed by Union soldiers not far from the college, and the girl jumped from a three-story building called the Conservatory, now known as Williams Hall.

The “grey lady,” as the apparition is called, is seemingly benevolent. Usually, she is glimpsed as a fleeting figure in grey, passing through college buildings and creating an almost indescribable presence. At other times, she is said to do small favors for students, such as opening windows on hot days, at times, evening completing their ironing.

Delta Sigma Phi Fraternity House – This house, once owned by a sorority, is haunted by a petite young woman who died of appendicitis. Appearing wearing 1920s era pajamas, the house members believe that the girl’s name is Eleanor. She has been seen in the basement, hovering in a corner. Other mysterious occurrences have been reported in the house, including flickering lights and television, footsteps and slamming doors, and clothing flying across the room.

Katy Trail — It has been reported that a one-armed man can be seen pacing beneath the bridge at the Kathy Trail when there is a full moon. 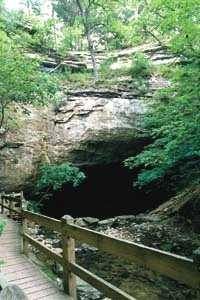 Rock Bridge State Park — This park houses a cave called Devil’s Icebox Cave, which is haunted by a malevolent spirit. Located seven miles south of Columbia on Highway 163, visitors should beware that many people have suffered severe accidents in this cave. Devil’s Icebox Cave has over seven miles of passages. Park-led tours can explore the cave by advanced registration only.

Sigma Alpha Epsilon Fraternity – Fraternity members believe strange happenings rise from the basement, dug for a house on their site that burned in 1907. This house had sheltered mental patients and served as a morgue for Civil War casualties. Today, Confederate soldiers are often seen in the basement. In 1947, it was said that a pledge class was forced to spend a night in the basement, but every one of them de-pledged the next day without explaining their reasons.

Sigma Phi Epsilon Fraternity House — Long ago, a sorority owned this house and housed a young Jewish woman in the 1940s. Upon learning that her parents had died in a concentration camp, she hanged herself by fastening a rope to a radiator and jumping from a window. Today, the restless spirit “shows” herself in a floating reddish light and through the sounds of footsteps on the stairs and hallway. Other eerie happenings include lights turning on, doors opening, and showers turning on without the help of human hands.

Stephens College – Stephens College was founded in 1833. In 1862, an Independence girl named Sarah Wheeler attended this college, living in one of the oldest buildings on the campus. Becoming involved with a Confederate corporal named Isaac Johnson, Sarah and several of her friends hid the soldier for several days when he was fleeing from federal rivals.

However, Johnson was soon discovered and was executed by firing squad under Sarah’s window as a lesson to other girls who might befriend the enemy. The distraught Sarah then killed herself. Today, it is said that Sarah haunts Senior Hall at the college.

Tiger Hotel – Dominating Columbia’s skyline since its opening in 1928, the Tiger Hotel has long had a reputation as being haunted. Unfortunately, soon after it was built, the great depression hit, and the majestic hotel became a flophouse, providing inexpensive housing for transient workers. In the basement, small partitions were made that had just enough room for a bed and a sink. Today, the building is listed on the National Historic Register and is undergoing rehabilitation. Also called “Tiger Columns,” it continues to be run as a hotel and a retirement center. The Tiger Hotel is located at 23 South 8th Street.