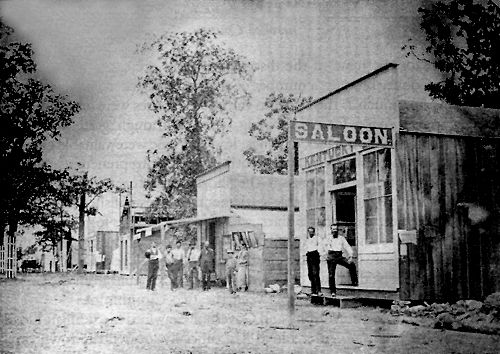 “If Empire City continues to improve as rapidly   in the future, it will certainly be the ‘Boss Town’   of the Southwest.” — The Mining Echo, 1877

Located less than a mile north of Galena, Kansas, on the other side of Short Creek, the townsite of Empire City was established on 120 acres, formerly a farm owned by J. Nichols. This tract, along with 580 more acres was purchased by the West Joplin Lead & Zinc Company for mining operations and a “company town.”

The townsite was laid out in the spring of 1877, and in May, 200 lots were sold. The building of the town immediately began as a rival of nearby Galena. On May 25, 1877, a large multipurpose building was completed, which held a saloon, restaurant, town company office, and hardware store.

As in Galena’s case, the excitement engendered by the lead discovery produced an immense influx of people wishing to secure their fortunes in these new fields of mineral wealth. As a natural result, the town’s advancement, both in its population and business, was extremely rapid. Long rows of houses and blocks of businesses went up simultaneously. 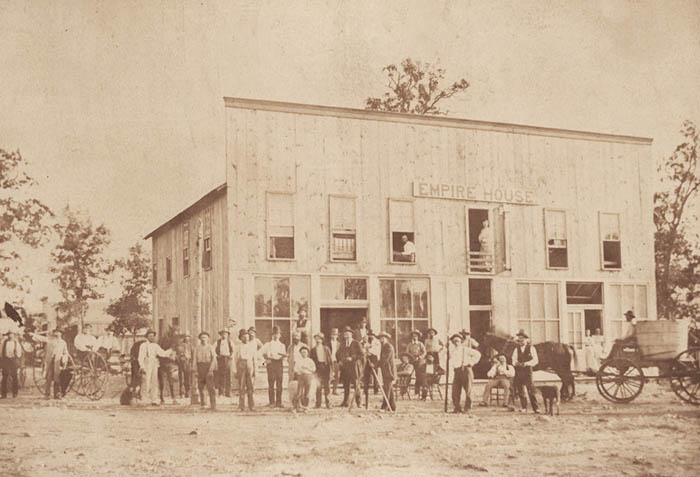 Empire City was incorporated as a city in June 1877, and a post office was established in July. By the end of the summer, the town boasted some 3,000 people.

Its growth was so quick that it inspired the Topeka Daily Commonwealth to comment:

“Such a motley collection of houses, men and women…The town looked as though volcanic convulsions had heaved it up. Houses had been erected with no regard to architectural beauty, the regularity of line, or locality. The streets are as crooked as illicit distilleries, and from morning till night, they are filled with people and teams. Saloons and gambling houses are the most frequent objects. Gambling quarters are in such great demand that several members of the profession are compelled to conduct their operations in the open streets.”

During its boomtown days, Empire City was noted for its growth and its seedier side. The thoroughfare, called Red Hot Street that ran between Empire and Galena was dotted with innumerable saloons, gambling halls, and brothels, spawning the Kansas City Star to comment: 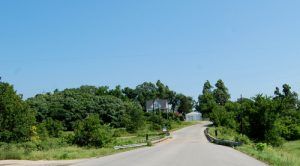 Looking north from Galena to Empire City,
with Short Creek in the foreground, Kathy Weiser

For a time, a heated spirit of rivalry was carried on between Empire City and Galena, each keeping pace with the other and seeking to excel in the race. The natural advantage was with Galena since most of the richest lead fields lay beneath and near the town. No sooner was this fact discovered than Galena began to take the lead of Empire City. This change soon began to seriously discomfit the Empire camp, which strove arduously to turn the tide and save themselves from being entirely absorbed.

With all the friction, the prospect of keeping order in the two mining camps was not a very promising one.

The quarrel assumed a serious aspect when Empire City decided to stop their population from moving over to the Galena side by building a stockade. On the night of July 25, 1877, the city council of Empire passed a resolution ordering a stockade eight feet high and one-half mile in length to be built along the south side of their city. If the plan was carried out, it would virtually stop all communication between the two cities and hinder public travel. The stockade was to enclose the south end of Columbus Street and the bridge over Short Creek. 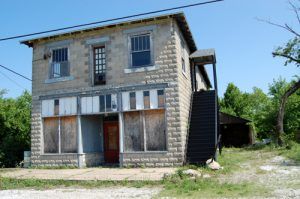 As the stockade began to be built, it created such a ruckus that the workmen were given police protection while building the wall. Galena residents protested in vain, petitioning the city, which, in turn, appealed to the U.S. Government to prevent the closing of a public highway to the U.S. mail.

However, as the gap was being closed and the federal government’s action was too slow, the Galena Mayor, acting under the authority of the city council, organized a posse of fifty citizens to prevent closing the gap. On August 15, 1877, at 4:00 am, the posse attacked, tore down, and burned the greater portion of the wall. Not anticipating the surprise attack, Empire City was unprepared, which resulted in the exchange of only a few shots and very little bloodshed.

For several years, the two towns continued to vie for dominance with constant feuds between the residents, becoming so intense that doctors and undertakers began working nights and sleeping during the days.

Despite the violence and illicit activities, Empire City continued to build, with most of its businesses located on Columbus Street. A newspaper called the Mining Echo was established in the fall of 1877, but it would only circulate for three years. The first school was taught in the winter of 1877-78 and a one-story frame building, containing three rooms was built in 1879. Two church groups were organized, including the Presbyterians and Catholics. The Presbyterians built a small frame building in 1879. A Catholic Church was constructed in 1881. 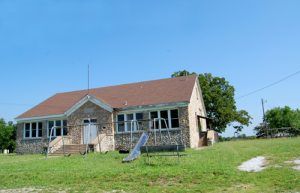 Though Empire City had already been annexed to Galena, the Roosevelt School was built in 1937 by the Works Progress Administration.

By the early 1880s, the population of Empire City was just over 1,000 and more than 300 students were being taught in the school.

By 1886, the city’s population had evidently dropped as its post office was closed in June, but it reopened the next March. However, by the end of the 19th Century, the ore was depleted, and the mining interests dwindled, along with the population.

Finally, the dispute between Galena and Empire City entered the courts, and after a long period of litigation, a truce was declared between the two cities, which, at last, began to work together in building one of the best mining camps in the world.

When Empire City became a suburb of Galena on July 9, 1907, the surrender of her rights as an incorporated city to Galena was made amid great rejoicing, and pieces of the old stockade were taken away as souvenirs by citizens of both settlements. Empire City was annexed into Galena as its Fifth Ward in 1910.

The town’s post office closed its doors forever in October 1913. 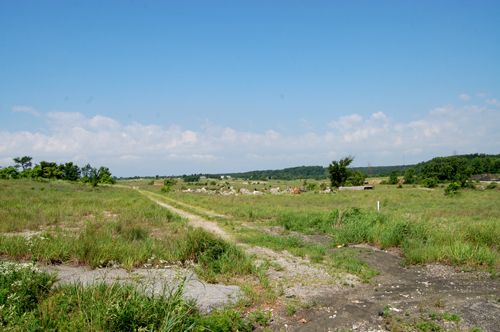 Empire City, sitting on a hill on the north side of Short Creek, overlooks this field, which was once filled with mining operations. Kathy Weiser-Alexander.

The Empire City no longer officially exists; there are still numerous homes and a couple of historical buildings left in the once-thriving community.

© Kathy Weiser/Legends of America, updated May 2022.