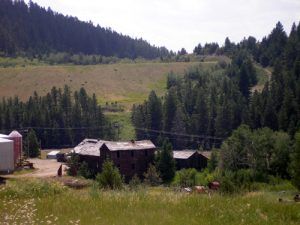 Located about one mile southeast of Philipsburg, Montana, Kirkville got its start in 1888 when the large Bi-Metallic Mill 100 stamp mill was built on Douglas Creek. The town, which reached a peak population of about 125 people, was primarily inhabited by mill workers. It once included numerous cabins, a boarding house, company office, warehouse, and assay office, along with the large Bi-Metallic Mill site.

In 1967, the 360 feet long mill building was burned for safety reasons, but its two smokestacks and foundations continue to stand. Also standing are two company houses, the brick office building, a barn, assay office, and the retort building. A modern flotation mill still operates periodically. The old townsite is located on private property, but some of its remains can be seen from the road.