The Race to Gain Public Interest in Motor Vehicles 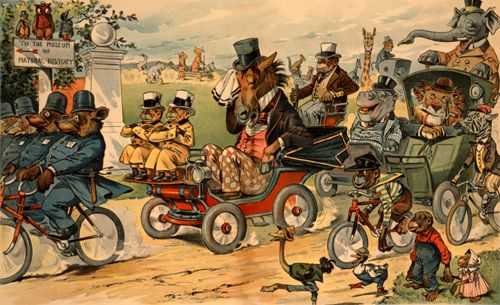 Automotive pioneers, visionaries, and eccentrics shared a common threat during the last decades of the 19th century and that was the wrath of neighbors and fellow citizens. Manifestations of their innovative efforts smoked, clanked, and startled horses into stampedes of destruction as well as mayhem.

For an automobilist, as they were called then, to have the support of friends and family was quite rare. However, for those afforded such a luxury the road to success was far less bumpy or perilous.

Counted among these fortunate few was Ransom Eli Olds, a member of a second-generation family of developers of steam engines. In the employ of his father at P.F. Olds & Sons, Ransom initiated work on his first “automobile” in mid-1886. Completed the following year, the cumbersome three-wheeled contraption was deemed a success in the simple fact that it ran under its own power.

In 1890, Olds commenced construction of a four-wheel model using cannibalized parts from the initial endeavor. Even though he found the completed vehicle to be unsatisfactory, Olds sold it in 1893 to the Francis Times Company, a London-based enterprise that shipped the car to their Bombay, India office, for $400. Olds had created the first exported American automobile. 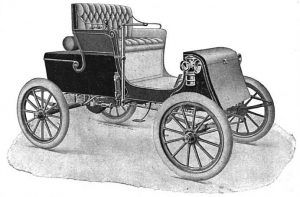 As steam power had a lengthy history of development and perfection, Olds and many other automotive pioneers saw in it the key to a future of road travel freed from the constraints of the horse. However, even though the idea had languished since the initial enthusiasm sparked by the issuance of a patent for a revolutionary internal combustion engine to George Bailey Brayton in 1872, and the construction of an omnibus utilizing that engine in 1879, more than a few automotive proponents saw the future in these smoking, clanking, oily engines.

A third group of visionaries worshiped at the altar of the amp and volt. The motto of the electric disciple, as voiced by Henry G. Morris was that “You’ll never get people to sit over an explosion.”

Morris was one half of a visionary team and Pedro G. Salom was the other. Together they crafted electric automobiles in the 1890s that pioneered many of the attributes heralded in the Chevrolet Volt and Toyota Prius.

In spite of the various manifestations of genius each vehicle produced represented, regardless of the propulsion method, they were still nothing more than experiments. Still, by the early 1890s, there was more than enough public interest in the automobile to stir the American entrepreneurial spirit and as a result, a few mechanical whiz kids began to wonder if there might be a profit to be made from the horseless carriage.

Exactly who created the first viable automobile for sale to the general public in the United States is a matter of conjecture fueled by thin paper trails obscured by the mists of time. Compounding the difficulty in unraveling this historical mystery is the simple fact that apparently, several people had the idea at the same time.

J. Frank and Charles E. Duryea of Springfield, Massachusetts initiated plans to build an automobile that could be sold to the general public in 1891, completed a relatively reliable experimental model two years later, and commenced production shortly after. As a historical footnote in the mid-1890s, a Duryea Motor Wagon was such a curiosity it received top billing over the albino and fat lady at the Barnum & Bailey Circus.

While the Duryea brothers often receive the nod for being the first to “mass produce” automobiles for sale, there are many, many others who were also building cars for sale during this period. Indications are that Henry Nadig built and sold several cars that utilized an internal combustion engine in about 1893. Charles Black was also building and selling cars (at least two of them) in about 1893. 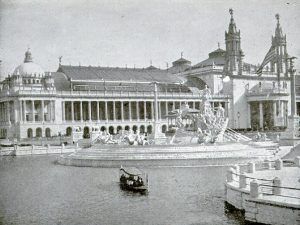 Surprisingly, in spite of this interest and the issuance of more than 200 patents pertaining to horseless carriages, automobile displays at the Machinery Hall of the World’s Columbian Exposition of Chicago opened on May 1, 1893, were few and far between. Daimler Motoren Gesellschaft had a vehicle on display resultant of its import by William Steinway. A Benz also was on display.

In the Electrical Building, two electric vehicles were displayed. Another electric was the five-seat omnibus used to transport visitors to various locations on the fairgrounds.

There was interest in automobiles. There were visionaries who believed these horseless carriages were the wave of the future. What was missing was the spark, a catalyst that would bridge the gap between theory and practicality, and between experimental and profitable. Enter H.H. Kohlsaat, one of the exhibitions officials, an ardent proponent of the fledgling automobile, and publisher of The Chicago Times-Herald.

As a journalist, he was intimately aware that in Europe promotional races and similar events had sparked tremendous public interest. It had also provided an incentive for inventors to sharpen their focus on the creation of viable technologies.

Utilizing his acumen as a businessman Kohlsaat initiated a brilliant campaign to increase the paper’s circulation as well as ignite a firestorm of American interest in the automobile. It was to be an unparalleled event built upon a desire “…to promote, encourage, stimulate invention, development and perfection and general adoption of the motor vehicle in the United States.”

The Chicago Times-Herald contest included speed but this was only one component. In addition to the display drive, the self-propelled vehicles underwent engineering tests designed to measure the vehicle’s competitiveness against a horse and wagon.

On the last three days of October 1895, eight vehicles were presented for testing. Initially, more than seventy-five entries were received but for a wide array of reasons, most were withdrawn upon publication of rules and conditions.

As a result, the speed and endurance portion of the contest was postponed until Thanksgiving Day. For this segment of the contest, 11 competitors lined up for the 54-mile drive.

Even though speeds were ridiculously slow by modern standards, or even by those set by Stanley-built cars in 1906, the race was filled with excitement for the spectators. To avoid a streetcar the Haynes-Apperson entry swerved and smashed a front wheel on a curb. Max Hertel’s entry suffered a broken steering gear. George W. Lewis and A.C. Ames were unable to get their vehicles started.

Driving through the occasionally deep snow proved too much for the Morrison Sturges electric. J. Frank Duryea was forced to wind rope chord around his wheels for traction.

Magnifying the difficulties drivers faced were the brutal weather conditions that included snowdrifts resultant of the previous day’s incredible 60-mile per hour winds, and unseasonably cold temperatures. None of this deterred thousands of spectators from lining the streets to see the spectacle. 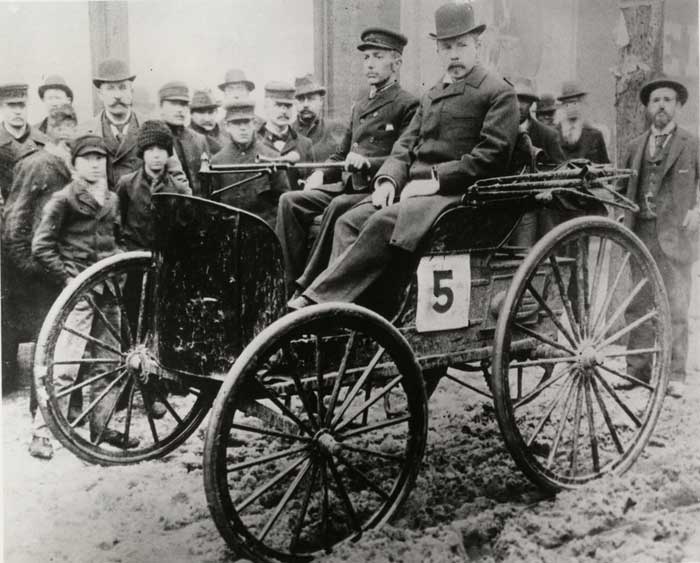 The race had commenced at 8:55 AM [November 28]. At 7:18 PM a bone-tired J. Frank Duryea finished in first place. As his vehicle had also passed the engineering tests, he was declared the winner.

The Chicago Times-Herald reported, “The progress of the preliminary trials has been watched by thousands of potential manufacturers in every part of the world and there is no doubt that there will be a great interest in the manufacture of these horseless carriages now that it has been demonstrated what can be done with them.”

However, the greatest testimony to the vehicles, and their future, came from Frederick Adams who had attempted to follow Duryea in a light wagon with a two-horse team. “No horse on earth could have made those 54 miles through the slush and mud. To me, this fact alone demonstrates more than anything else the great value of the horseless carriage.”

Resultant of the publicity from this race, as well as the first-place finish in several others including the 1896 London to Brighton Run, the Duryea brothers manufacturing endeavor was faced with an enviable issue, orders and demand exceeding production capabilities.

In retrospect, it would seem that Mr. Kohlsaat had been correct. The race was indeed the needed catalyst.

Within three years of the event, more than 200 automobile manufactures were in operation with a capital investment of $500 million dollars. Riding on these coat tales was the establishment of hundreds of ancillary manufactures.

The dawn of a new century loomed on the horizon. With it came the promise of a brave new world unfettered from the constraints imposed by old Dobbins.

About the Author: Jim Hinckley is an award-winning author and photographer, and an official contributor to Legends Of America through a partnership developed in October 2012. Hinckley is a former Associate Editor of Cars and Parts Magazine, and author of multiple books, including several on Route 66.  His latest “The Route 66 Encyclopedia” is available with an autograph via Jim Hinckley’s America.

Jim Hinckley on Legends of America