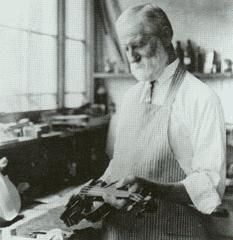 There is an old adage that claims two heads are better than one. Well, with the Stanley twins, F.O. and F.E., the adage was made manifest in spades.

The brothers began displaying hints of being gifted with sharp and inquisitive minds at a very early age. In addition, they proved to be quite ambitious in their quest for knowledge.

Both brothers pursued a career in teaching but for minds as imaginative as theirs, the confines of a classroom proved too restrictive. Instead, they turned their creative talents toward inventing and manufacturing endeavors that included the establishment of the first company for the commercial manufacture of violins, the invention of a home generator for gas utilized for illumination, and pioneering work in the development of early x-ray equipment.

Initially, success proved elusive. Then in 1875, at age 26, F.E. purchased a photographic studio for an investment of $500, an endeavor that would prove to be the brothers Stanley path toward fame as well as fortune.

A decade of attentive management provided the capital for the development of the first practical dry photographic plate process. F.O. joined his brother as a full partner in the new company.

In 1888, the facility in Lewiston, Maine was sold, and a new, larger company, Stanley Brothers Dry Plate Manufacturing Company, was established in Watertown, Massachusetts. The demise of this pioneering company was not the result of anemic sales, poor management, malfeasance, or even technological development that rendered their primary product obsolete but a pivotal encounter with the display of a steam-powered carriage at the Brockton, Massachusetts, fair in 1896.

Though the initial demonstration of the primitive automobile was a rather lackluster resultant of multiple breakdowns it was enough to pique the inquisitive and imaginative mind of F.E. Early in 1897, a steam engine and boiler were purchased from J.W. Penny & Sons, a body was purchased from Currier, Cameron & Company, and a wide array of other parts was acquired from a variety of manufacturers.

The Stanley-built “steamer” made its debut at the 1897 Brockton Fair and the response received was such the brothers were compelled to manufacture three more “steam wagons,” each reflecting improvement over the predecessor. The last of these initial models were sold for $650 to John Brisbane Walker in 1898 who subsequently sold it, for a profit, to Amzi L. Barber, a financier who specialized in investment in new technologies.

The Stanley-built “steam wagon” bought by Walker generated so much interest both Walker and Barber initiated negotiations to buy out the Stanley brothers. Initially, the brothers rejected these overtures and instead concentrated on perfecting their vehicle.

In November of 1898, F.E. stunned more than 5,000 spectators as he drove the improved model around a one-third-mile track to a new world automotive speed record with an average speed of 27.4 miles per hour without mechanical failure.

Inundated with hundreds of orders as a result of the demonstration the brothers felt compelled to initiate the manufacture of automobiles for sale to the general public. The first step in this new endeavor was the acquisition of a former bicycle factory adjacent to their former photographic plate company from Sterling Elliot in January of 1899. Next, they established standardized, interchangeable mechanical components for their vehicles, and arranged with Currier, Cameron & Company to supply bodies. 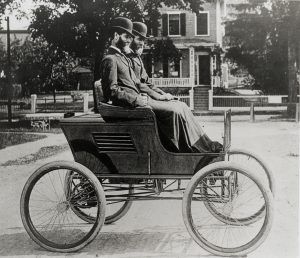 Stanley Twins in their first car, photo from the Stanley Museum

By summer, one hundred vehicles had been completed and sold, and the brothers had acquired patents for numerous key components. All of this led Barber and Walker to redouble their efforts to purchase the company.

As a historical footnote, in 1899 the Stanley brothers played a key role in the launching of another American corporate icon. The sale of their patents and photographic plate manufacturing company became the cornerstone for the Eastman Kodak Company.

In 1901, as technological advancements to the gasoline engine made them more practical, Locomobile reorganized, abandoned the use of steam propulsion, and sold the Stanley patents, and former factory, to the brothers Stanley who had been developing improved components for steam engines. The rest, as they say, is history.

By 1903, the all-new Stanley Brothers Manufacturing Company, was well on its way to establishing an automotive icon that would long outlive the company and the brothers even though sales never surpassed 10,000 units per year. In part, this status was the result of stunning record-setting prowess.

In 1906, at Ormond Beach (now Daytona Beach) Fred Marriott of the companies repair department piloted a special bodied Stanley to a stunning 127 miles per hour, a new automotive speed record. The following year he survived a horrendous crash at nearly 150 miles per hour during an attempt to break that record.

The death knell for the company sounded in 1912 with the introduction of an electric starter as standard equipment on Cadillac. A primary obstacle to the dominance of gasoline engines had been breached.

The company soldiered on in the face of declining sales until 1923 when it slid into bankruptcy and receivership. The assets formed a primary component in the formation of the Steam Vehicle Corporation of America, a company that produced a scant handful of vehicles under the Stanley name until 1927. 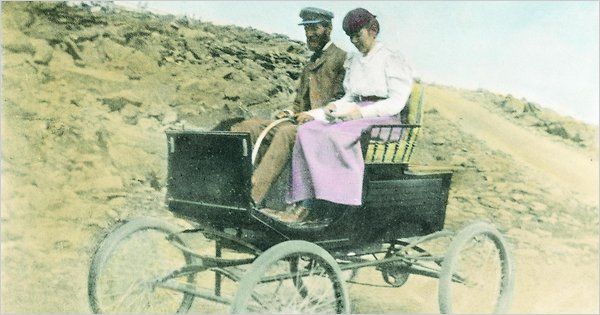 F.O. Stanley and wife Flora driving to the top of Mount Washington, New Hampshire on August 31, 1899.

The brothers Stanley were not myopic in their endeavors. In 1903, under a doctor’s recommendations, F.O. Stanley began spending time in Estes Park, Colorado. In 1907, he addressed the lack of amenities for the increasing number of tourists by initiating construction of the Stanley Hotel, a grand hotel that opened in 1909, and that is currently listed on the National Register of Historic Places and that served as an inspiration for Stephen King’s The Shining.

To further foster tourism in the area, which in turn resulted in a booming business for the hotel, he had a road built from Lyons. For transport from the train station there to the hotel, he utilized specially constructed Stanley-built steam-powered busses.

What the brothers may have contributed to the world in the years after the First World War is a matter of speculation as F.E. Stanley died in an automobile accident in 1918. F.O. spent the remainder of his life developing Estes Park with the establishment of the first bank there, as well as a sewer, power, and water company.

The brothers Stanley are just one of many pioneering automobile manufacturers who have obtained a dubious form of immortality. Their name is known throughout the world but few know that behind the legendary automobile were men of diverse genius that transformed the world.