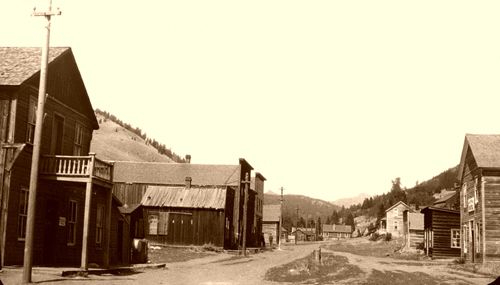 Located in Park County about five miles west of Gardiner, Montana, gold was first discovered in Bear Gulch in 1866.

However, until the turn of the century, only small placer mine operations worked in the area. However, this changed when a man named Harry Bush came to the area in 1898, leasing and buying a number of claims. He first enlarged an existing mill to include 20 stamps and laid out a settlement that was first called Bush. Within a year, the mining camp had about 130 buildings and miners were flooding into the district. Organizing the Revenue Mining Company, Bush continued to acquire more claims and actively promoted the area.

However, the ambitious man was unsuccessful due to inadequate mine development, insufficient funds, and financial mismanagement. In 1901, his company went into receivership and work was suspended.

The following year, the camp’s name was changed to Jardine. In 1903, the claims were bought by the  Kimberly – Montana Gold Mining & Milling Company who built a 150-ton cyanide plant, added additional stamp mills, and utilized new air compressors for underground drilling. Though the improvements aided in bringing out the minerals, they were more costly than the company anticipated and in 1906, it too failed.

The mine then changed hands several times before the Jardine Gold Mining &Milling Company acquired the property and equipment, which included 23 patented claims, several developed mines, and the townsite. Mining and milling of gold and low-grade scheelite ores began again in 1918 and in continued until 1921 when the properties were purchased by the Jardine Mining Company. The new company discovered arsenic and in 1923 built an arsenic plant, which operated almost continuously from 1923 to 1926, then intermittently until 1945. The mill continued to process various ores until 1948 when a fire destroyed the cyanide plant and the Jardine Mining Company closed the mill.