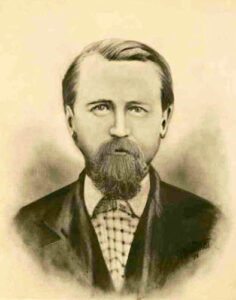 James “Jim” Robert Cummins was an outlaw that rode with the James-Younger Gang and James Gang after the Civil War and was involved in several train robberies.

Also known as “Windy Jim,” James Johnson, and “Old Jim,” Cummins was born on January 31, 1847, to Samuel B. and Eleanor C. Crossettin Cummins in Kearney, Missouri. He was also raised in Kearney, where Frank and Jesse James also lived. He was good friends with Jesse. When he grew up, Jim was described as standing six feet, three inches, with blue eyes, and a broad round jawline.

In 1863, during the Civil War, he joined the Confederate Partisan Rangers serving under Captain “Bloody Bill” Anderson and Lieutenant Arch Clemens. He would later say that he joined up after Unionists in Clay County accused his mother of harboring bush-whackers and tried to force his mother to abandon her home. He also rode with Quantrill’s Raiders.

A known horse thief, he was a founding member of the James-Younger Gang when the war was over. The men were soon robbing banks, stagecoach lines, railroad express cars, and passengers. Cummins was with the James Gang when they robbed the trains at Winston and Blue Cut, Missouri. The Pinkerton National Detective Service tracked them for several years but the outlaws were always a step ahead of them.

On April 23, 1882, Bob Ford, along with his brother, Charlie, while staying at Jesse James’ home in St. Joseph, Missouri shot and killed Jesse for the reward money. Cummins was suspected of being involved in the plot to kill Jesse James because his sister, Artella Cummins, married Robert Ford, Jesse’s killer.  After the breakup of the James Gang, he became a farmer in Arkansas and actually tried to turn himself in several times, but no one believed he was really Jim Cummins. At the age of 63, he married Florence Sherwood and lived to old age. He died in the Confederate Soldiers Home at Higginsville Missouri on July 9, 1929. He is buried in the Confederate Memorial Cemetery at Higginsville Missouri, where William C. Quantrill is also buried. 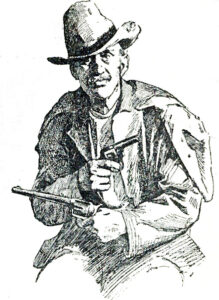 Before he died, Cummins made several attempts to publish the accounts of his life and times with the gangs but his renditions were largely dismissed as fictional accounts.

The James-Younger Gang – Terror in the Heartland