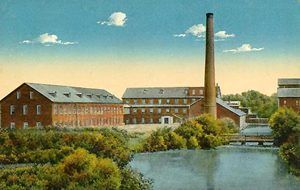 The Inspirationists established mills and shops according to their old-world skills. Amana’s woolen and calico factories were among the first in Iowa and quickly gained a national reputation for superior quality goods. The Inspirationists did not avoid the use of new technologies and, in fact, are known to have contributed innovations of their own to the textile industry. By 1908, the two woolen mills (in Amana and Middle Amana) were producing about a half-million yards of fabric a year and the calico factory printed 4,500 yards of its famous cloth each day. Two flour mills (in West Amana and Amana) processed the community’s own small grains as well as those of neighboring farmers. Crops of potatoes and onions were shipped to Midwest markets. Profits from the mills and farms were used to purchase goods from outside the community.

Of course, for the Inspirationists, all this economic activity was subordinate to their religious purpose, to live a godly and pious life. To assist them in this, church services were held 11 times a week: every evening, Wednesday, Saturday and Sunday mornings, and Sunday afternoon. The Community also observed Easter, Christmas and other Christian holidays. In addition, the Inspirationists in Amana held several special services during the year. Of these, the annual renewal of the covenant between each member and the community, and Holy Communion were the most important. Holy Communion was actually held at times determined through inspiration until the death of Metz in 1867 and thereafter, usually every other year. A yearly spiritual examination was held over several months with the Elders visiting each village in turn. Each member of the community came before the Elders and was questioned regarding his/her spiritual condition and admonished to lead a more pious life. 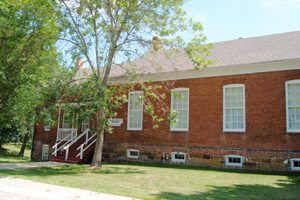 The church Elders, always men, comprised the leadership in the community and conducted the church services in each village. Some Elders were chosen as Trustees who managed the economic aspects and daily life of the villages. Up to this level, each village functioned independently. Collectively, the villages were governed by a Board of Trustees, 13 Elders elected by the adult members of the community. This board directed the overall affairs of the community. Following the death of Barbara Heinemann Landmann, the last Werkzeug, in 1883, the elders and Trustees functioned for nearly 50 years without the support of divine authority. They showed a remarkable degree of flexibility to allow communal Amana to become one of America’s longest-lived communal societies.

At the turn of the 21st century, the Community of True Inspiration is approaching its 300th year of existence although the Amana of today differs from that of a century before. By the 1930s, the communal system in Amana had generated stresses which it could not resolve. Many community members found the rules associated with communal living to be petty and overly restrictive. Regulations governed most aspects of daily life including dining, dress and leisure activities. Many young people wanted to be free to play baseball, to own musical instruments or to bob their hair in the new style. Families wanted to eat together at home rather than in the communal kitchen dining rooms. Although members received an annual spending allowance, many people felt theirs was inadequate and were frustrated by their inability to enjoy more material goods. Increasingly the elders were unable to enforce the rules. 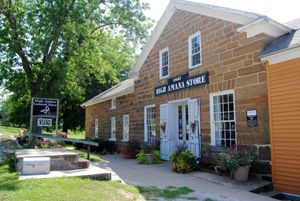 In 1931, the community found itself in a crisis. In addition to the social strains of communal living, the community had suffered several economic setbacks in the previous decade. The Amana Society had lost an important source of revenue when its calico print works closed after World War I. A fire in 1923 extensively damaged the woolen mill and completely destroyed the Amana flour mill. And the national economic depression had shrunk the market for the Society’s agricultural products.

The Elders presented the members of the community with a choice: either they could return to a more austere and disciplined life or they could abandon the communal system. Significantly, the dissolution of the church was not considered as an alternative. But most members also recognized that their community had changed and that they were probably incapable of returning to the strict life of early communalism. Many people no longer equated their faith with the social mores dictated by the Community. Furthermore, many members felt that communalism itself was no longer a necessary tenet of faith of the church. On June 1st, 1932, the members elected to retain the traditional church as it was, and to create a joint-stock company (Amana Society, Inc.) for the business enterprises to be operated for profit by a Board of Directors [Use of American currency began January 15, 1933]. This separation of the church from the economic functions of the community — the abandonment of communalism — is referred to by Amana residents still today as “the Great Change.” 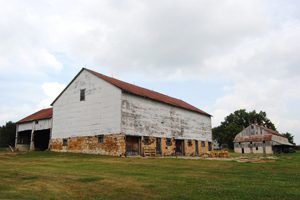 Today, the Amana Society, Inc., corporate heir to the land and economic assets of communal Amana, continues to own and manage some 26,000 acres of farm, pasture and forest land. Agriculture remains an important economic base today just as it was in communal times. Because the land was not divided up with the end of communalism, the landscape of Amana still reflects its communal heritage. In addition, over 450 communal-era buildings stand in the seven villages — vivid reminders of the past.

The most widely known business that emerged from the Amana Society is Amana Refrigeration, Inc. This national leader in the production of refrigerators was founded by an Amana native, George C. Foerstner at the time of the Great Change. The first beverage cooler, designed for a businessman in nearby Iowa City in 1934, was built by skilled craftsmen at the Middle Amana woolen mill. In the decades that followed, the mill became the site of this large, now private, plant producing refrigerators, freezers, air conditioners, and in 1967 introduced a new product — the Amana Radarange Microwave Oven. Today, the 19th-century woolen mill smokestack still rises over the modern plant. 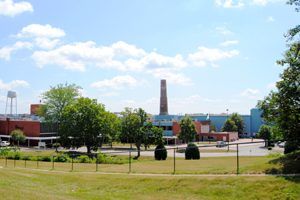 The Amana Church continues to be a vital part of the Amana community. These churches are much as they were when built more than 125 years ago. The building exteriors are unpretentious with no steeples or stained-glass windows.

The interiors continue to feature the unfinished wood floors, plain pine benches and unadorned walls that have long echoed the tradition of humility and piety. Men still enter and sit on one side of a central aisle; women on the other.

English language services were introduced in 1960, but, in both German and English services, the order of worship has changed little over the years, which include a reading from Scripture; a reading from a testimony from Rock, Metz or Landmann; and hymns that would be recognized by a congregation of a century earlier.
Today, heritage tourism has become important to the economy of the Amana area. Historic preservation efforts by several local nonprofit organizations, as well as the Amana Society, Inc. in conjunction with land-use and historic preservation ordinances attempt to preserve the natural and built environment of Amana.

Visitors can stroll through Amana, the largest of the seven villages, and visit the Amana Woolen Mill and Amana Furniture Shop, which was originally a calico mill. Touring the other villages by car, visitors will pass through historic farmland and observe the imprint the colonists made on their landscape at places such as the Mill Race, a canal dug to provide waterpower for the mills, the Lily Lake, and groves of trees called Schulwalds. Barns and agricultural buildings were clustered together at the edge of each village; examples of this can be seen in West Amana, South Amana, and High Amana. 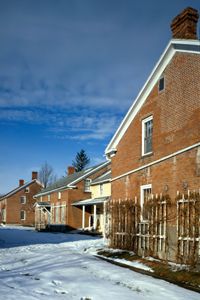 Each village contained numerous dwellings, such as those in Homestead. Groups of about 30-40 people ate their meals at one of several village kitchens, like one in Middle Amana that is now the Communal Kitchen Museum. Adjacent to this building is Hahn’s Hearth Oven Bakery, one of the several village bakeries that supplied fresh bread to the kitchens daily, and the Coopershop Museum, an example of the many trade buildings that were vital to daily life in Amana.

Every village also had a general store, such as those in High Amana and West Amana, and a school for children ages 7-14. But of course the focus of the colonists’ lives was their religion, and a church was an essential element of each village where services were held 11 times a week. The Amana Colonies have long been a popular destination for tourists, who were interested in learning about communal life. Several of these historic hotels and other historic communal buildings continue to offer lodging today, including the Die Heimat Country Inn, Lower South Hotel, and the Baeckerei Bed and Breakfast.