Allegedly, the first to purchase it was French banker Jaques Colet, who bought the Hope Diamond from Simon Frankel, and just a short time later Colet went mad and committed suicide. 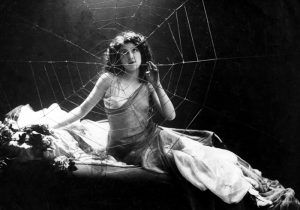 Afterward, it was sold to Russian Prince Ivan Kanitowsky, who loaned it to his lover, actress Lorens Ladue. The first time she wore the diamond on stage, she was shot by a man in the audience that many people said was the Russian prince himself. Just a few weeks later, Kanitowsky was stabbed to death in Paris by Russian revolutionaries.

By this time, the legend of the curse had increased and an article entitled “Hope Diamond Has Brought Trouble To All Who Have Owned It” appeared in the Washington Post in 1908. The same year, the stone was back in the possession of the Frankels who made a concerted effort to sell what they called the “hood diamond.” The next person to acquire it was a well-known Greek jewel broker by the name of Simon Maoncharides who acquired the stone in late 1908. He quickly sold the diamond to Habib Bey, a Persian diamond merchant. On the night that the deal was concluded, Maoncharides accidentally drove his carriage over a precipice, killing himself, his wife and child.

Afterward, Habib Bey quickly sold the stone to Salomon Habib who was acting on behalf of Abdul Hamid II, the Sultan of Turkey. Within months Habib Bey drowned during the sinking of a French steamer in 1909.

Abdul Hamid II, known as “Abdul the Damned”, gave the Hope Diamond to his favorite concubine, Salma Zubayaba, with orders that it be protected by Kulub Bey, his favorite eunuch and guardian of the Sultan’s treasures. Just a few months later, Zubayaba was stabbed and killed by a low-level official in the treasury who tried to steal the gem. The thief, Jehver Agha, was caught by Kulub Bey and hanged after being tortured. Another man named Abu Sabir, who was tasked with polishing the stone for the Sultan was unfairly accused of working with Jehver Agha and was tortured and executed.

Shortly after this incident, Abdul Hamid II was overthrown during the Young Turks Rebellion of April 1909. The sultan was later captured and imprisoned at Beylerbeyi Palace in Istanbul, Turkey. Legend has it that Kulub Bey was captured by a mob after the uprising and slowly strangled to death. 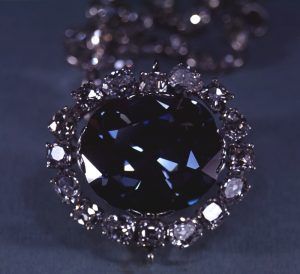 Afterward, the stone was sold to Parisian jewel merchant Simon Rosenau who sold it in 1910 to Pierre Cartier, a French jeweler who owned one of the most respected firms in Paris, London, and New York. That year, Cartier tried to sell it to American mining heiress and socialite, Evalyn Walsh McLean. At that time, she wasn’t interested. However, when Cartier reset the diamond into a more modern piece, he sold it to Edward B. McLean on behalf of his wife Evalyn in January 1911 for $180,000. Though both Edward and Evalyn had been warned not to buy the diamond by Edward’s mother and May Yohe, the sale went through. However, it was not an easy sale, as negotiations took several months, which got mired down in a lawsuit, and the buyers required a blessing by a priest.

Evalyn mocked the curse joking that things that brought other people bad luck brought her good luck. Perhaps Edward wasn’t convinced though as the original contract with Cartier included a clause stating: “Should any fatality occur to the family of Edward B. McLean within six months, the said Hope Diamond is agreed to be exchanged for jewelry of equal value.”

A description of the gemstone stated: it “lay on a bed of white silk and surrounded by many small white diamonds cut pear-shaped”.

“Both Ned McLean and his pretty wife are quite young, and in a way unsophisticated, although they were born and reared in an atmosphere of wealth and luxury. All their lives they have known more of jewelry, finery, banquets, automobiles, horses, and other articles of pleasure than they have of books, with their wealth of knowledge.” 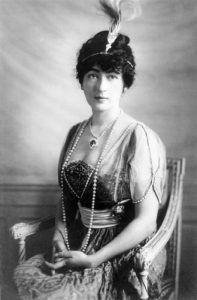 Mrs. McLean wore it the diamond publically for the first time to a reception in February 1912. Afterward, she would be seen wearing the precious stone at numerous social events. A bail was soldered to the pendant where Mrs. McLean would often attach other diamonds including the McLean Diamond and the Star of the East.

Though Evalyn joked about the curse and kept the diamond until the end of her life, numerous tragedies occurred during her lifetime.

Shortly after she got the diamond her mother-in-law died. In 1919, her nine-year-old son, Vinson, ran in front of a car and was killed. In 1929, Edward McLean went off with another woman and even claimed to have married her but he hadn’t. In the meantime, both Edward and Evalyn continued to spend lavishly and were divorced in 1932.

The next year, Edward McLean’s increasingly erratic behavior and reckless spending led to the forced sale of The Washington Post newspaper in 1933, which he had inherited in 1916. The same year, Edward was declared legally insane due to brain atrophy brought on by alcoholism. The court ordered that he be committed indefinitely to a psychiatric hospital. He was never released and died in 1941. In 1946, Evalyn’s only daughter died of an accidental overdose of sleeping pills at the age of 25. The next year, Evalyn died of pneumonia at the age of 60.

Mrs. McLean bequeathed the Hope Diamond to her grandchildren with the requirement that it would remain in the custody of trustees until the eldest child reached 25 years of age. This would have prevented any sale for the next two decades. However, Evalyn died deeply in debt and the trustees gained permission to sell her jewels to settle her debts. In 1949, her jewel collection was sold to New York diamond merchant Harry Winston. In addition to the Hope diamond, the collection also included the 94.8-carat Star of the East diamond, the 15-carat Star of the South diamond, a 9-carat green diamond, and a 31-carat diamond which is now called the McLean Diamond.

For the next 10 years, the Hope diamond was shown at many exhibits and charitable events worldwide. In November 1958, Winston donated the Hope Diamond to the Smithsonian Institution to help establish a national jewel collection.

Allegedly, there was one last victim of the diamond’s curse — a postman named James Todd. After promising to donate the diamond, Winston sent it through the U.S. Mail from New York to Washington, D.C. After Todd delivered the package, he crashed his truck and shattered his leg. He then got in another crash, injuring his head. He also lost his wife and dog to untimely deaths and afterward, part of his house burned down. 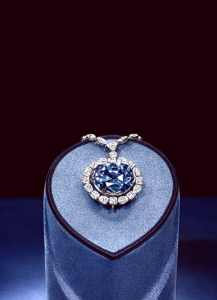 Hope Diamond at the Smithsonian Museum

Since the Smithsonian acquired the gemstone, the “curse appears to have gone dormant” and for decades the Hope Diamond and the rest of the museum’s gem collection have brought only good luck to the museum with higher attendance.

Owning the diamond has brought “nothing but good luck” for the nonprofit national museum, according to a Smithsonian curator, and has helped it build a “world-class gem collection” with rising attendance levels.

Today, the Hope Diamond, described as the “most famous diamond in the world”, is exhibited in the Harry Winston Room in the Hall of Geology, Gems, and Minerals of the Natural History Museum of the Smithsonian Institution in Washington, D.C. In the pendant surrounding the Hope Diamond are 16 white diamonds. The necklace chain contains 45 white diamonds. It was last reported to be insured for $250 million.