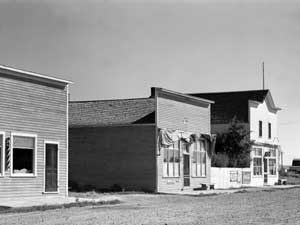 Located in southern Sheridan County, Homestead, Montana was an agricultural and railroad town that was first settled in 1910.

In the beginning, it had several names, starting with Barford, because of its proximity to the historic N Bar N Cattle Company’s Missouri River crossing, when trailing their cattle to Kenmare, North Dakota. The first postmaster changed the town’s name to Pederson, after himself, but postal authorities objected. It was then changed to Fort Peck, but that didn’t work either, when the Fort Peck Indian Agency in Poplar, Montana, protested.

Finally, the town was called Homestead. The town became a popular shipping point with its Great Northern Railroad Depot. The town once boasted a meat market, a saloon, a grocery store, hotel, barbershop, the Pioneer Press newspaper, a school, livery stable, lumber yard, two churches, a bank and a Community Hall. Today, this tiny community still has a few residents, but no open businesses. Several old buildings continue to stand, testifying to more prosperous times. Homestead is located six miles north of Froid and six miles south of Medicine Lake. 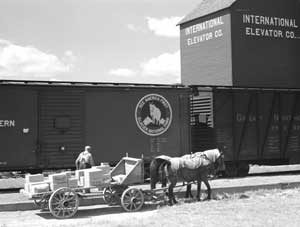