The Gila Cliff Dwellings National Monument in the Gila Wilderness of New Mexico protects the Mogollon cliff dwellings along the headwaters of the Gila River.

These cliff dwellings were constructed and inhabited by the Mogollon people between the late 1270s and 1300. These natives built their homes in both natural caves and in the open. Their cave dwellings are located within Cliff Dweller Canyon. 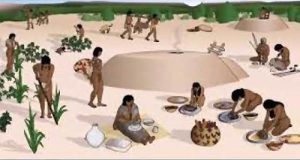 Long before the arrival of Europeans, these early Americans lived and made the narrow canyons their home. When European American settlers came to the area in the early 1870s searching for water and fertile land, they were surprised to find traces of earlier human occupation. Walls of stone, strewn with pottery fragments, were reminders of a well-developed culture that had lived in this landscape for over a thousand years.

Archeologists estimate that 40-60 Mogollons constructed the Gila Cliff Dwellings, building their interlinked dwellings in five caves. Each dwelling had approximately 40 rooms. It is estimated that no more than 10 to 15 families lived in the dwellings at one time and that multiple generations used them. The Mogollon incorporated fallen rocks into the construction of some of the rooms. These thin stone slabs were connected with mortar to construct their walls.

While many different groups inhabited this area over the years, the Mogollon made their homes within the canyon’s natural caves. The Mogollon Culture was an Indian group that combined traditional hunting and gathering with farming. Their farms were on the mesa tops and along banks of the West Fork of the Gila River, where they raised squash, corn, and beans. The animals they hunted included mule deer, elk, beaver, ducks, and turkeys, and they collected berries and nuts from the surrounding forest. They ground cornmeal with metate and mano, wove cotton cloth, were skilled potters, and traded with other communities and cultures. Their clothing and sandals were made of yucca cord, agave leaves, bark, and cotton.

It is not known why the community was abandoned. 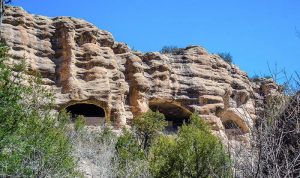 Today, more than 40% of the walls retain this original plaster. The dwellings contain habitation rooms, storage rooms, ceremonial rooms, and communal rooms. Prepared floors can be found throughout the dwellings, while some of the rooms’ floors utilize the existing bedrock in the caves. All wooden beams seen in the dwellings are the originals.

Gila Cliff Dwellings was declared a National Monument on November 16, 1907. When the Monument was established, there had been little investigation of the local archeology. Since that time, the Mogollon culture has been accepted as a distinct and important prehistoric culture endemic to southwestern New Mexico, southeastern Arizona, and adjacent areas of northern Mexico and western Texas. Near the center of the Gila River headwaters, more than 103 prehistoric sites have been identified.

The Monument also preserves the T.J. Ruin, a small pueblo inhabited from roughly A.D. 900 to A.D. 1150, and other significant archeological sites. Located on a bluff overlooking the Gila River, the T.J. Ruins are largely un-excavated. 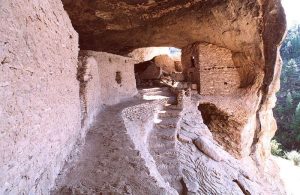 Visitors can experience the cliff dwellings by following the “Cliff Dwellings Trail” that leads to the dwellings, passing through some of the rooms. Ladders along the trail provide additional glimpses of the dwellings. The trail is a one-mile loop with several footbridges over a stream that takes around one hour round trip. A short 1/4 mile handicapped accessible trail leads to a small Mogollon alcove dwelling and a large pictograph panel. Visitors can obtain information about these trails at the Monument’s visitor center that displays Mogollon artifacts and an exhibit on the Chiricahua Apache, who consider the wilderness their homeland. A 15-minute video illustrates what life may have been like for those who built the cliff dwellings.

Consisting of 553 acres, the terrain around the ruins is rugged and arid and contains steep-sided canyons cut by shallow spring rivers and mesas and forested bluffs. The Monument’s hot springs are remnants of its volcanic history. The Monument is surrounded by the Gila National Forest and lies at the edge of the Gila Wilderness, the nation’s first designated wilderness area.

Other nearby attractions include hot springs, associated ruins sites, National Forest hiking trails, and fishing along the Gila River and in the Gila Wilderness.

“In that country which lies around the headwaters of the Gila River, I was reared. This range was our fatherland; among these mountains, our wigwams were hidden; the scattered valleys contained our fields; the boundless prairies, stretching away on every side, were our pastures; the rocky caverns were our burying places.” 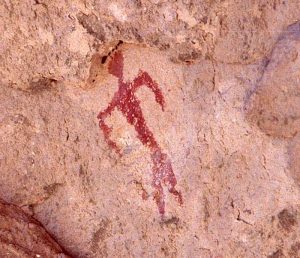