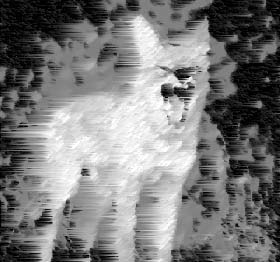 At the age of seven, I spent the summer with my grandmother in San Luis Potosi, Mexico.  One night while I was sleeping, I was awakened by a terribly loud cry.  The shriek was just horrible, sounding human, and I was very frightened.  Immediately, I tried to wake my cousin and my brother, but it was as if I couldn’t move or speak.  Lying there trembling, the shrieking went on for what seemed like an hour.  Finally, the crying stopped, and I was able to sleep.

The next morning I asked my grandmother if she could explain what I had heard, and she began to tell me the Legend of Coyote De La Muerte (Coyote of the Death.). Long ago, when my grandmother was a child, there was a coyote in the area as big as a wolf, who would often shriek in the night just before someone would die.  The cry, which sounded like that of a woman, was so loud that the entire pueblo would be awakened by its shrieks. Her description was exactly the same as what I had heard the previous night.

Immediately, I began to wonder who was going to die.  Soon, we received a visit from my aunt, who was very sick from cancer.  Incredibly pale, skinny, and with yellowed eyes, I was too afraid to even look at her.

The summer at an end, I returned to Texas, and just after I got back, my mother received the bad news that I already knew in my heart.  My aunt had passed away.

To this day, people try to find the Coyote De La Muerte but, instead find themselves doing nothing but going deeper into the monte.

About the Author:  Eduardo Leora now lives in Dallas, Texas but grew up in Houston.  Even today, he still thinks back and often remembers that terrible cry. Always loving a good scare, Eduardo promises to keep in touch and share more legends in the future.