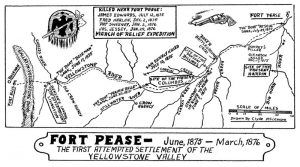 Fort Pease, Montana was established in June 1875 by Gallatin Valley traders. The trading post was named for Major Fellows D. Pease, an expedition leader, and Indian trader. It was located just below the mouth of the Big Horn River not far from old Fort Lisa.

It was hoped by the Bozeman traders that the site might become an important riverboat site. The post consisted of a series of log huts connected by a palisade of cottonwood logs enclosing an area some 200 feet square. However, the post was built on land that the Sioux claimed as their own and they regarded the establishment as an invasion of their hunting grounds. After just a few months of operation, the post was held under siege by the Sioux until it was relieved by U.S. troops. The site was then occupied by the U.S. Army in 1876 during the Sioux Wars, at which time, it was called Terry’s Landing. After the soldiers abandoned the fort, the Sioux burned the fort to the ground. The site was located at what is known as Pease Bottom in Treasure County, Montana.