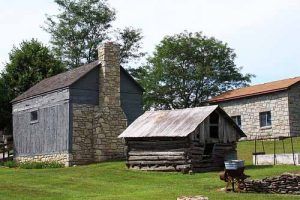 After Montgomery’s personal home, located just a few miles west of Mound City, Kansas had been burned to the ground by Missouri guerrillas, he determined to protect himself and his family and began to build the fortress. Along with several friends, the two-story log cabin fortress was built from oak and walnut trees on the side of a hill that had a wide range of vision. The second story contained portholes that not only provided light and ventilation but also gun holes.

One feature that just a very few of Montgomery’s friends knew about was a crude tunnel dug beneath the building that would later prove invaluable as Montgomery was able to escape a number of “posses” who were searching for him. He later joined the Civil War, where he was commissioned as a Colonel. After the war, Montgomery returned to his fortress, where he worked as a farmer until his death in 1871.

Today, Montgomery’s home has been rebuilt by the Mound City Community.