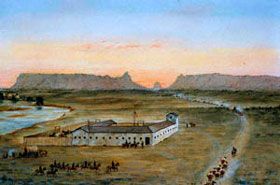 Fort Mitchell, Nebraska was a short-lived Army post that operated for three years in present-day Scotts Bluff County in the western portion of the state.

The outbreak of the Civil War in 1861 stretched the Federal Government’s resources for the West thin, making it increasingly difficult for the government to protect emigrants and other travelers on overland trails. Many U.S. soldiers went back East to fight for the Union, which weakened the frontier garrisons. Beginning in 1860, the short-lived Pony Express followed the Oregon Trail past Scotts Bluff and daily stagecoach service along the route began in 1861, the same year the transcontinental telegraph line went through.

These changes prompted Indian raids. Beginning in 1861, frequent attacks by Sioux and Cheyenne war parties on telegraph lines, overland mail service, stagecoaches, and wagon trains forced the government to establish several small military outposts, among them Fort Mitchell, on the Oregon Trail near  Scotts Bluff. Both the fort and the nearby pass through the bluffs got their name from General Robert B. Mitchell, commander of the military district of Nebraska.

Colonel William Collins of Fort Laramie, Wyoming designed Fort Mitchell as an outpost of Fort Laramie, which had too few troops to combat the Indians. Constructed in 1864, the 180-by-100-foot sod and adobe fort consisted of barracks, shops, and a horse corral. Company H of the Eleventh Ohio Volunteer Cavalry under the command of Captain J. S. Shuman garrisoned the fort. Soldiers from Fort Mitchell participated in a famous skirmish with Sioux and Cheyenne Indians at Mud Springs in 1865 that was prompted by the massacre of hundreds of Cheyenne and Arapaho Indians at Sand Creek, Colorado in 1864. 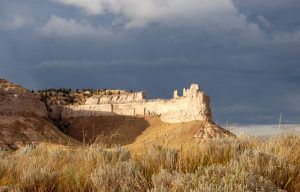 In 1866, two travelers through the area described the fort. Julius C. Birge recounted:

“At Fort Mitchell there was stationed a company of soldiers to impress upon the Indians the idea that the strong military arm of the U.S. government extended over the West. As we learned later, three-score soldiers were but a feeble menace to the thousands of dissatisfied warriors who were then roaming over the plains, awaiting some assurance from our authorities that the last of their ancient hunting grounds would not be invaded or traversed by the whites.”

The wife of Colonel Henry B. Carrington traveling with her husband on an expedition to the Powder River country reported:

“Almost immediately after leaving the Bluff, and at the foot of the descent, after the gorge is passed, we find Fort Mitchell. This is a sub-post of Fort Laramie of peculiar style and compactness. The walls of the quarters are also the outlines of the fort itself, and the four sides of the rectangle are respectively the quarters of officers, soldiers and horses, and the warehouse of supplies. Windows open into the court or parade-ground; and bed-rooms, as well as all apartments, are loop-holed for defense.”

The site of Fort Mitchell is a significant archeological time capsule. The site provides valuable data on the tools, weapons, personal property, and other objects used at the time. Although overshadowed by the fort, Sibson’s Road Ranch was also located at the site, and today offers important historical and archeological records. The temporal and geographical proximity of the two sites affords researchers a rare opportunity to compare civilian and military outposts of a single time period. 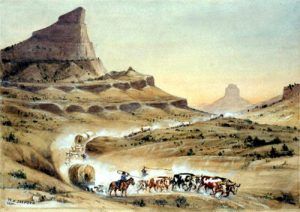 The Fort Mitchell site is located near Scotts Bluff, though the address and visitation are restricted due to its fragility and lack of extant historic buildings. Visitors wishing to learn more about the fort can visit Scotts Bluff National Monument. The monument’s visitor center includes a scale model of the fort as it existed in 1866, as well as other resources regarding the fort and life in and around Scotts Bluff.