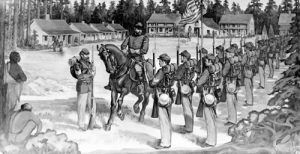 Situated on a bluff overlooking Humboldt Bay in present-day Eureka, California, Fort Humboldt was founded in 1853 by Captain R. C. Buchanan and Companies B and F of the 4th U.S. Infantry. The remote military post was established to assist in the numerous conflicts arising between the native Indians and the many gold-seekers and settlers who had begun flooding into the area after the discovery of gold in the northern mines. One of the first soldiers to be stationed here was none other than Captain Ulysses S. Grant in 1853-54. at the post built 14 buildings, which included the barracks, bakery, a blacksmith, hospital, stable, blacksmith, Officer’s Quarters, and Laundress’ Quarters.

The fort was the central base in the Indian Wars in the region until 1865 but was entirely abandoned by 1867. The buildings rapidly deteriorated and after many years, the land was transferred to the State of California 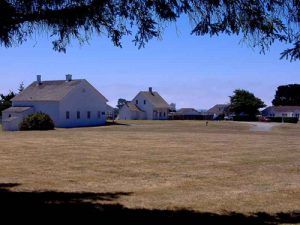 Today, the old post is the Fort Humboldt State Historic Park. Only the hospital building remains out of the original 14 structures. In the 1980s the Surgeon’s Quarters were reconstructed and there are plans for its establishment as a period house museum. The park also includes a Logging Museum which displays not only the area’s logging history, but also early Native American life, and the tragic violence that occurred between gold miners and Native Americans in the mid 19th century.