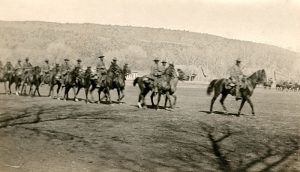 One of the first posts in the area, Fort Goodwin, Arizona was established in June 1864 by California Volunteers to provide protection for settlers in the Gila Valley. Located near a beautiful spring about two miles south of the Gila River, the post was named for John N. Goodwin, the first Territorial Governor of Arizona.

From the beginning, the post faired poorly due to unethical contractors, whose adobe buildings began to crumble in just a few short years. In the spring of 1866, the California Volunteers were relieved by two companies of the 14th U.S. Infantry and later that year, the post’s designation was changed from a fort to camp.

Another problem that plagued Fort Goodwin was malaria-carrying mosquitoes that swarmed from a spring about 500 yards south of the post. Though the spring produced good water, it, unfortunately, ran through a stagnant swampy area before it reached the post. Finally, sickness and disease became so prevalent that the post was abandoned in March 1871. During the 1880s a sub-agency of the San Carlos Reservation was located at or near the site.

Today nothing remains of the post, which is situated on farmland. The only physical marker is a Bureau of Land Management survey marker which indicates the original site of the fort’s flagpole.