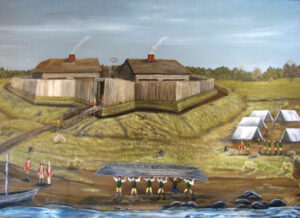 Fort Brewerton, New York, constructed in 1759, is a historic fort site located in Oswego County. It was built to protect the passage from Albany to the port of Oswego.

Long before European settlers arrived, this area had been occupied by Native Americans who created travel routes along the local waterways and blazed trails to various points. A set of rocky rapids across the Onondaga River connected with a well-traveled Native-American footpath from Pennsylvania to Canada.

This area was considered the “Prehistoric capital of New York State” and was in a perfect position for a British fortification during the French and Indian War (1754-1763.) The Iroquois Indians generously allowed the British to build Fort Brewerton here, midway between Fort Stanwix in present-day Rome, New York, and Fort Ontario in Oswego, New York.

The fort was built in the form of an eight-pointed star with sixteen 30-foot faces surrounded by a ten-foot moat. The 480-foot-long parapet had five-foot earth walls from which projected log palisades. Within its walls were four “L” Shaped blockhouses that accommodated approximately 130 soldiers. There were also smaller buildings for munitions and supplies and a well. It took approximately six weeks to complete.

In 1789, Oliver and Nancy Stevens relocated to Fort Brewerton from Connecticut. Stevens was encouraged to come to the area by his two brothers, who were soldiers garrisoned at Fort Brewerton from 1756 to 1758. Making his home in one of the fort’s blockhouses, he established a trading post and a boatman’s tavern on the lower level, furnishing supplies and other necessities to those who navigated the waterways. The upper level served as the family home, where he and his wife raised six children. Stevens is documented as the first non-native settler in Oswego County. Oliver Stevens lived in the blockhouse until he died in 1813. 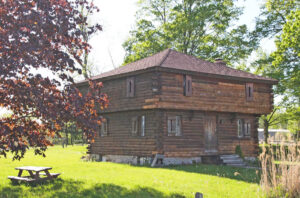 Today, the blockhouse has been reconstructed based on the original design of the building utilizing logs and some of the actual bricks recovered from the rubble.

It is located at 9 US Route 11 in Brewerton, New York.