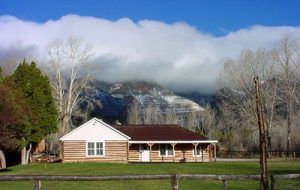 A ghost ranch located in the Bighorn Canyon National Recreation Area in Montana, the place was started by prospector turned rancher, Erastus T. Ewing in 1896. Though many hoped that Bighorn Canyon might contain a large mother lode, no big strikes were ever made. However, Ewing and several partners had several claims where some gold was found, but no big strikes. Failing as a mining magnate, Ewing turned to ranching, appropriating water from layout Creek for irrigation and holding ponds. By 1898, there were enough squatters, ranchers, and prospectors to justify a post office, which was located at the Ewing Ranch.

Over the years, the ranch changed hands several times until it was bought by the U.S. Government for inclusion in the Bighorn Canyon National Recreation Area in 1968. Called the Ewing/Snell Ranch, for its original owner and the Snell family, who lived there the longest, the ranch continues to maintain several buildings including a house, stables, outbuildings and a school building. The ghost ranch is located north of Lovell, Wyoming on County Road 37, inside the Bighorn Canyon National Recreation Area. 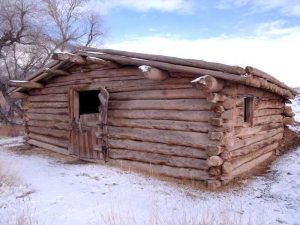