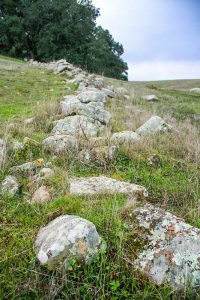 The East Bay Walls, also known as the Berkeley Mystery Walls, are crude walls and rock lines found throughout the hills surrounding the San Francisco Bay Area of California.

These lines of stacked stones, built without mortar, range in height from a foot to about three feet high and run for hundreds of miles going as far as Chico and Red Bluff, California. Most of the walls are about three feet wide and run in sections from several feet long to over a half-mile long. The stones used to construct the walls vary in size from basketball-size to large sandstone boulders weighing a ton or more. The walls themselves are not all the same — some are built in long straight lines, while others form angles, rectangular forms, or circular constructions. Throughout the area can be found elongated formations of large stones, some stacked, some not. Sometimes, parts of the wall are carefully constructed, while in other places, it appears to just be a pile of rocks.

Some are just rows of stones, forming lines that are sometimes spaced. Some have sunk into the earth and are overgrown with vegetation.

In the Oakland hills the walls head inland towards Mt. Diablo where stone circles of up to 30 feet in diameter can be seen. In other places, the walls form a 200 feet circle surrounding a large boulder.

The exact age of the walls is unknown. However, some of the first Spanish settlers in the area, as well as the Ohlone Indians, said they were already there when they arrived.

For more than a century, the people of the Bay Area have been wondering who built these walls, how old are they, and what were they used for.

But, there are no answers and their purpose remains unknown.

They are too low to have been used for defense, and the multiple discontiguous sections suggest they were not utilized as fences.

“This is undoubtedly the work of Mongolians… the Chinese would naturally wall themselves in, as they do in all of their towns in China.”

“Stone age relics discovered in the Berkeley Hills. A Five faced stone image from a cave, a prehistoric ax and two pieces of pottery seem to change the accepted history of the western world.” — San Francisco Chronicle, September 4, 1904 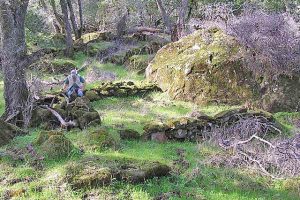 The article goes on to say that when Dr. Myers excavated in a cave in a cliff, he found a piece of rhyolite stone which displaced five faces carved upon its five sides… proving that chiseling was done anywhere from 1000 to 10,000 years ago. One face in it some Indian characteristics; the other four are unmistakably Mongolian. Dr. Myers also found a stone ax, a large flat stone table, a fireplace filled with bones, and an earthenware jug.

The guestimates regarding the building of these walls range from the mundane, such as settlers placing the stones to help guide and corral livestock to navigational aids utilized by extraterrestrials.

Others theorize that the walls were built by a vanished tribe of “superior” Native Americans, by ancient voyagers, or by other Indian tribes for mystical or ceremonial purposes. Some say that the Ohlone Indians built the walls, however, the tribe denies this and they were hunter-gatherers who were not known to have built permanent structures.

What isn’t explained is how some of the very heavy boulders could have been moved, for whatever the purpose.

No written documentation exists to identify when they were built, by whom, or why. The oldest published mention of the “mystery” appeared in the San Francisco Chronicle in March 1896. 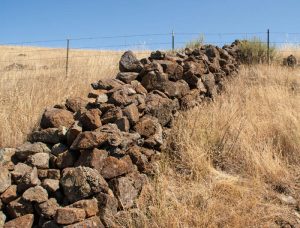 Forensic geologist Scott Wolter theorized that the wall is only 200-300 years old based on testing on the limestone rock. Other testing of the lichen on the stones suggests that they were probably built between 1850 and 1880.

Since 2016, archaeologist Jeffrey Fentress has been measuring and mapping the walls, hoping to eventually gain protection from development or other destruction.

The East Bay Walls are accessible in several area parks, including Ed R. Levin County Park in Santa Clara County, the Mission Peak Regional Preserve in Alameda County, and many other parks.