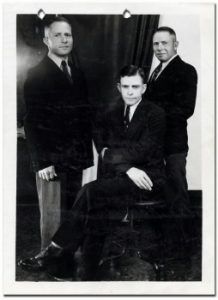 Wannabee train robbers, Hugh, Ray and Roy DeAutremont ambushed a Southern Pacific Railroad train in southern Oregon on October 11, 1923. During the robbery, they shot and killed the train’s brakeman, engineer, and fireman. The brothers then used dynamite to blow their way into the mail car but they used too much and the explosion killed the mail clerk and started a fire that destroyed the car. The killings were known as the Siskiyou Massacre and became one of the largest and most extensive investigations in the region.

Though rumor had it they made off with some $40,000, they actually left empty-handed. An extensive manhunt resulted in the arrest of Hugh DeAutremont who had joined the army under an assumed name. Before long, his brothers were captured in Steubenville, Ohio and all three were convicted and sentenced to life in prison. Hugh DeAutremont was paroled in 1959 and died just a few months later. Roy, who was given a frontal lobotomy while in prison, was paroled in 1983 and died three months later. Ray was paroled in 1961 and went to work as a custodian for the University of Oregon. He died on December 22, 1984, in Eugene, Oregon.